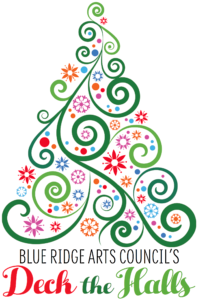 Each November, the gallery of Blue Ridge Arts Council is transformed into a holiday wonderland. Deck the Halls has proven to be a tremendous success over the past 15 years. Hundreds of volunteers participate in this event each year by artistically decorating artificial trees and wreaths inspired by clever themes such as “Owl Be Home for Christmas” and “Silver Splendor.” Last year we had over 100 items, including trees, wreaths, and silent auction baskets netting over $14,000 for our programs. Deck the Halls is a major fundraising event for Blue Ridge Arts Council. We appreciate your generous support and hope you will help us continue this cherished holiday tradition!

Kick-off the holiday season in style! This is your first opportunity to purchase that special item for your holiday home or business. The event also features live auction and silent auction gift baskets. Attire for the evening is holiday festive. *Decorators receive a complimentary ticket to this event*

Featuring visits with Santa and fun holiday entertainment and activities for the whole family! Remaining trees and wreaths are available for sale.

Like to be a part of the fun? There are three ways you can help: