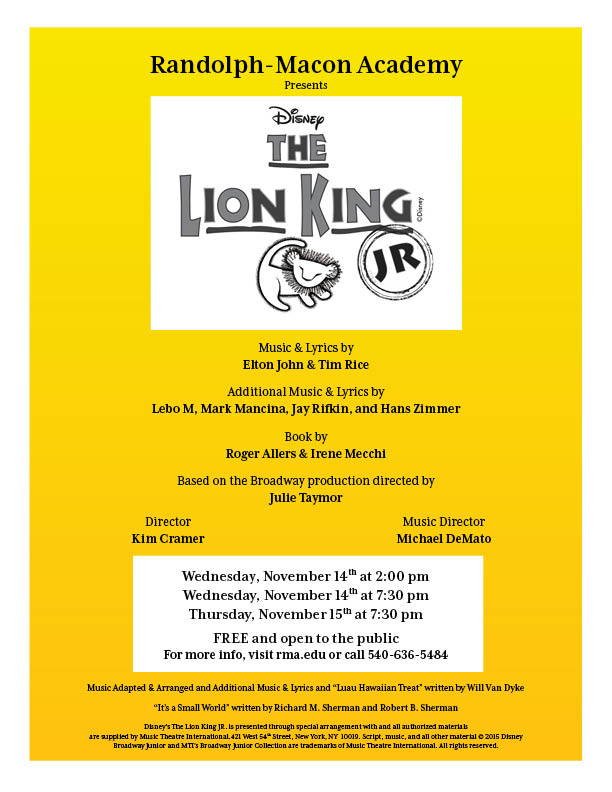 Disney’s The Lion King JR. is playing at Randolph-Macon Academy starting on Wednesday, November 14, 2018 at 2:00 pm for two days only, through Thursday, November 15, 2018. Lasting approximately 90 minutes (including intermission), the performance is based on the Broadway production directed by Julie Taymor and the 1994 Disney film. The Randolph-Macon Academy cast contains approximately 20 students led by R-MA Drama Instructor Kim Cramer.

The Lion King JR. tells the story of the epic adventures of a curious cub named Simba as he struggles to accept the responsibilities of adulthood and his destiny as king. Along the way, the young lion encounters a colorful cast of characters including spunky lioness Nala, charismatic meerkat Timon, and loveable warthog Pumbaa. To claim his rightful place on the throne and save his beloved Pridelands     , Simba must find his inner strength and confront his wicked Uncle Scar. The Lion King JR. features classic songs from the 1994 film such as “Hakuna Matata” and the Academy Award®-winning “Can You Feel the Love Tonight” as well as additional songs penned for the Broadway production.

All performances of Disney’s The Lion King JR. are open to the public at Melton Memorial Gymnasium on the Randolph-Macon Academy campus on Wednesday, November 14th at 2:00 pm and again at 7:30 pm, with the final performance coming on Thursday, November 15th at 7:30 pm.  Admission is free.

For more information about licensing The Lion King JR. or other Disney shows, please visit www.DisneyMusicals.com.

Randolph-Macon Academy’s theater department, under the direction of Kim Cramer, has brought to life productions such as Grease, Mulan, Once On This Island, and many other classics. The performances became so popular that the program has had to move out of the “Little Theatre” into the gymnasium to accommodate the attendance.

Disney Theatrical Group (DTG) operates under the direction of Thomas Schumacher and is among the world’s most successful commercial theater enterprises, bringing live entertainment events to a global annual audience of more than 19 million people in more than 50 countries. Under the Disney Theatrical Productions banner, the group produces and licenses Broadway musicals around the world, including Beauty and the Beast; The Lion King; Elton John & Tim Rice’s Aida; TARZAN®; Mary Poppins, a co-production with Cameron Mackintosh; The Little Mermaid; Newsies; Peter and the Starcatcher; and Aladdin. Other successful stage musical ventures have included King David in concert, the national tour of On the Record, several touring versions of Disney’s High School Musical, and Der Glöckner Von Notre Dame in Berlin.

Disney Theatrical Group also delivers live shows globally through its license to Feld Entertainment, producer of Disney on Ice and Disney Live! For over 30 years, Disney on Ice and Disney Live! have brought beloved Disney stories and characters annually to over 12 million guests in nearly 50 countries worldwide through productions such as Toy Story 3, Dare to Dream, Rockin’ Ever After, and Disney Junior Live on Tour! Pirate & Princess Adventure. In addition, DTG licenses musical titles for local, school, and community theater productions through Music Theatre International.

Music Theatre International (MTI) www.mtishows.com, is one of the world’s leading dramatic licensing agencies, granting schools as well as amateur and professional theaters from around the world the rights to perform the largest selection of great musicals from Broadway and beyond. MTI works directly with the composers, lyricists, and book writers of these shows to provide official scripts, musical materials, and dynamic theatrical resources to over 60,000 theatrical organizations in the U.S. and in over 60 countries worldwide.

One winner will be selected from among all middle school entries (grades 6-8) and one from high school (grades 9-12) entries.

The topic for the 2020 contest is “An American Who Served in The Military During World War II Who Inspires Me.”  Students can consider a member of their family, of their community, or a famous man or woman who served in any branch of the U.S. Armed Forces as their subject.  Essays should be 500-750 words in length and utilize interviews and primary sources whenever possible.

The two students who write the winning essays will each receive a $200 gift card and each of their teachers, will earn receive a $100 gift card to purchase classroom supplies.  The student winners will also be invited to come to Richmond to read aloud their essays and participate in the Commonwealth’s Veterans Day Ceremony at the Virginia War Memorial on Wednesday, November 11, 2020.

The deadline for entries for the Virginia War Memorial 2020 Veterans Day Student Essay Contest is 11:59 p.m., Sunday, October 11, 2020.  Complete information regarding the essay theme, rules, guidelines and how to enter is available online or by calling Virginia War Memorial Assistant Education Director Morgan Guyer at 804-786-2060.

The mission of the Virginia War Memorial in Richmond is to Honor Veterans, Preserve History, Educate Youth and Inspire Patriotism in All.  Dedicated in 1956, the Memorial includes the names of the nearly 12,000 Virginia heroes who made the ultimate sacrifice during World War II, Korea, Vietnam, the Persian Gulf, and the Global War on Terrorism.  Located at 621 South Belvidere Street in Richmond, the Virginia War Memorial is a division of the Virginia Department of Veterans Services and serves as an integral part of its mission in support of all Virginians who have served in our military.  For more details, visit www.virginiawarmemorial.org or www.dvs.virginia.gov.

The Virginia Department of Veterans Services (DVS) is a state government agency with more than 40 locations across the Commonwealth of Virginia.  DVS traces its history to 1928 and the establishment of the Virginia War Service Bureau to assist Virginia’s World War I veterans.  Today, DVS assists veterans and their families in filing claims for federal veterans benefits; provides veterans and family members with linkages to services including behavioral healthcare, housing, employment, education and other programs.  The agency operates two long-term care facilities offering in-patient skilled nursing care, Alzheimer’s/memory care, and short-term rehabilitation for veterans; provides an honored final resting place for veterans and their families at three state veterans cemeteries.  It operates the Virginia War Memorial, the Commonwealth’s tribute to Virginia’s men and women who gave the ultimate sacrifice from World War II to the present. For more information, please visit www.dvs.virginia.gov.

Valley Health System announced last week that it has extended the Paycheck Protection Plan enacted in April to provide income security to employees during a time of service disruption due to COVID-19. The protection initiative has been extended from an initial 90-day period, set to expire July 25, to remain in effect through the end of the year.

Valley Health implemented the Paycheck Protection Plan in mid-April as a pre-emptive response to significant declines in outpatient care, diagnostic testing, and elective procedures at Valley Health’s six hospitals and outpatient facilities. This reassurance to Valley Health’s employees was announced as hundreds of hospitals and health systems in the U.S. were laying off staff. Valley Health System’s Board of Trustees has authorized the use of reserve funds, if needed, to extend the Paycheck Protection Plan through 2020.

“As our health system and community were confronting COVID-19 and preparing for a potential surge of patients, we wanted our associates focused on one thing – providing safe, high-quality care and protecting their health — not worrying about their employment status or the financial impact of reduced hours,” said Valley Health President and CEO Mark Nantz. “Our initial commitment to the PPP initiative was for 90 days, and I’m proud to say that during this time, hundreds of our associates were able to maintain at least 70% of their pay and continued benefit coverage.”

The not-for-profit health system employs more than 6,000 dedicated associates, hundreds of whom benefited from the Paycheck Protection Plan after experiencing a reduction in hours due to service closures. While Valley Health’s day-to-day operations have not returned to pre-COVID normal, most full and part time associates have resumed their regular schedules, and the immediate need for the PPP has significantly decreased. But the local impact of the global pandemic has been difficult to predict.

“Acknowledging lingering uncertainty about the course of the virus in the months ahead, our leadership team and Trustees are committed to guaranteeing each associate a minimum of 70% of their regular pay should there be a reduction in hours related to COVID-19,” Nantz said. “Our priority is to remain strong and resilient, with our workforce intact, prepared to safeguard the health of our community.”

If you’re looking for an easy way to adopt healthier eating habits, then meal prep is for you. This method consists of planning and preparing your meals a week in advance and is easy to integrate into your routine. Here’s how and why you should do it.

How to do it
Make a menu for the upcoming week that includes healthy, balanced meals that freeze well or can keep for a few days in the fridge. You can either make a few different meals or a large batch of a single dish that you enjoy. Once you decide what’s on the menu for the week, make a list of everything you need and hit the grocery store. Spend an afternoon cooking and you’ll have a week’s worth of food that you only need to warm up.


If you plan out your weekly menu, the first thing you’re likely to notice is that you’ll eat well throughout the week and stress less at mealtimes. This is because you won’t have to cook or scramble to find something to eat every day. Plus, you’ll likely eat much healthier than you would if you had to improvise every day. You won’t have to settle for processed or fast food.

One of the main obstacles to developing healthy eating habits is that cooking balanced meals takes time. Meal prep solves this issue by making it quicker and easier to eat nutritious meals throughout the week.