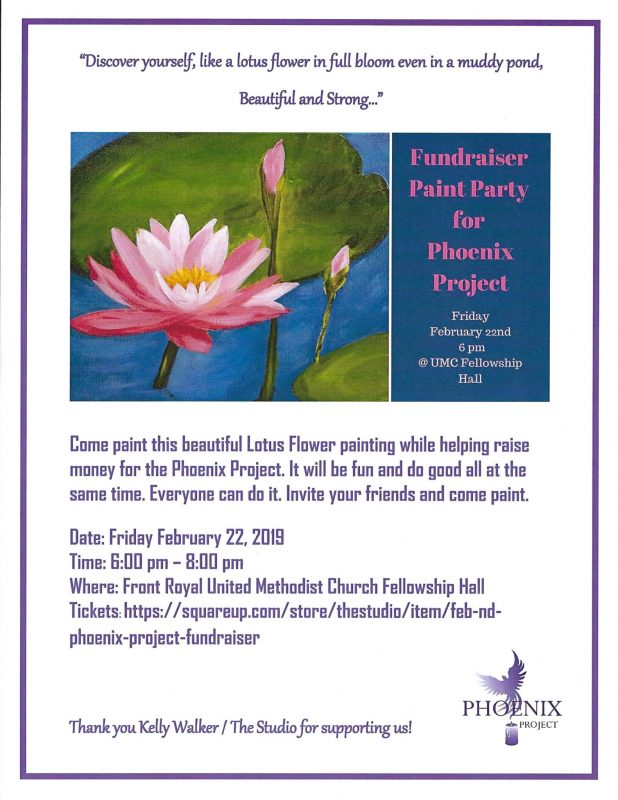 Come paint this beautiful Lotus Flower painting while helping raise money for the Phoenix Project. It will be fun and do good all at the same time. Everyone can do it. Invite your friends and come paint.

Governor Ralph Northam and First Lady Pamela Northam today, October 21, 2020, announced $65.8 million in new funding to increase access to child care and support child care providers amid the ongoing COVID-19 pandemic. This new investment is supported by $58.3 million in Coronavirus Relief Fund dollars as well as a reallocation of $7.5 million in Child Care and Development Block Grant (CCDBG) funding through the federal Coronavirus Aid, Recovery, and Economic Security (CARES) Act. First Lady Northam made the announcement during a virtual meeting of the Children’s Cabinet.

On June 21, 2018, Governor Ralph Northam issued Executive Order No. 11 reestablishing the Children’s Cabinet. Experiences during the early years of a child’s life have a tremendous impact on development and life outcomes. This Children’s Cabinet will develop solutions to address challenges that exist for children across the Commonwealth and will focus its efforts on several key priorities. Among these priorities are early childhood development and school readiness, nutrition and food security, systems of care and safety for school-aged youth. In addressing these priorities, the Children’s Cabinet will work to develop goals, identify strategies, and measure impact and outcomes. Courtesy photo.

“Our ongoing COVID-19 response and recovery depend upon having a child care system that is both accessible and operational,” said Governor Northam. “Early childhood educators have been on the frontline since COVID-19 pandemic started, going above and beyond to keep their doors open, ensure children are safe, and even fill in the gaps with remote learning as schools have reopened. This new funding will help them continue to support working families and enable more programs to safely provide in-person child care.”

This funding will continue the incentive grant program for child care providers announced in April through the end of 2020. This program provides flexible cash assistance to child care providers to help offset operating costs and expenses associated with meeting health and safety guidelines. The Virginia Department of Social Services, in partnership with the Virginia Department of Education, has distributed more than $46 million in direct assistance to child care programs to date.

“Virginia’s early educators are true superheroes, and thousands of our families rely on them every day,” said First Lady Northam. “After listening to providers across the Commonwealth, it was clear that continuing this incentive grant program had to be our top priority. I am thrilled we were able to get it done, and I look forward to continuing to support early childhood education during this difficult time.”

Nearly 2,672 child care programs in Virginia—nearly 45 percent—closed their doors at the onset of the COVID-19 pandemic, but thanks to more than $70 million in grants and other relief, many either have reopened or are starting to. Providers have reported that this funding is critical and many indicated that without additional financial support, they were unsure how long they could continue to operate.

“Child care plays an essential role in providing high-quality, safe learning environments for Virginia’s children while ensuring their parents and caregivers are able to work,” said Secretary of Health and Human Resources Daniel Carey, MD, MHCM. “Serving working families remains a top priority, and we will continue to do all we can to support them.”

Child care programs have also stepped up to serve children who are participating in virtual learning, ensuring that they have safe, supervised spaces with access to food, supplies, and the internet. At least half of open child care programs have reported serving school-age children, and this new funding will also help communities establish public-private partnerships to meet the needs of working families with school-age children.

“Access to child care, especially from birth to age 12, is key to our economic recovery, financial stability for families, and helping Virginia’s children succeed in school,” said Virginia Department of Social Services Commissioner S. Duke Storen. “This additional funding provides a critical financial lifeline to the many working parents who depend on child care programs.”

The distribution of these funds will be announced by the Virginia Department of Social Services in the coming weeks. A comprehensive guide to COVID-19 child care resources in Virginia is available here. Additional health and safety guidance for Child care centers that remain open can be found here.

Parents who are in need of child care services should visit Child Care Aware at VAchildcare.org or call 1-866-KIDS-TLC for an up-to-date list of child care options in their area.

Students say protests motivating them to the polls

Voters are more divided now than they were in the 2016 election, according to a recent poll by the Pew Research Center. Many young Virginians believe the passion could translate to the polls on Election Day.

Rickia Sykes, a senior at Norfolk State University in Norfolk, said that her political views have grown stronger since protests erupted globally in late May. The death of George Floyd, who died after a Minneapolis Police Department officer kneeled on Floyd’s neck for nearly 8 minutes, inspired months of protests.

Sykes said that her political views line up with her faith. She considers herself pro-life, believes in advocating for the working class, and supports law enforcement.

“The protests have shown me we need to keep God first, but it has also shown me that good cops are important to help keep law and order,” Sykes said in a text message. “I do realize that there are bad cops, but in order to make a change, I believe we need to work together with the good cops.”

Sykes said that now she researches politicians more thoroughly before deciding which candidate gets her vote. She looks at voting records to see if they vote in a way that “will help us middle and lower-class families.”

Erik Haugen, a junior at Virginia Commonwealth University in Richmond who considers himself a Libertarian, said his political views haven’t changed much since the protests started.

“I just see the stronger push for equality, and I think it’s a good step in our nation so long as it proceeds peacefully,” Haugen said.

Equality is at the center of issues that student voters are concerned about this election. From racial injustice to prison reform to healthcare concerns, many students say they want to enact positive change.

Sarah Dowless, a junior at William & Mary in Williamsburg, said that voting has always been important, but the protests have made voting more prominent, “like people encouraging folks to vote and making information about voting accessible, especially among young people.” Dowless said the recent protests have reinforced her progressive beliefs.

“If anything, the protests have only amplified my concern for racial injustice in America and my concern about police brutality,” she said. “It’s a fundamental issue about freedom and it calls into question the very principles on which this country was founded and continues to claim.”

According to the United States Census Bureau, voter turnout among 18 to 29-year-olds jumped 15.7% between 2014 and 2018. This was the largest percentage point increase for any age group. Turnout is expected to be high this year as well, but there are no final numbers for age groups. Voter registration in Virginia set a record this year with almost 5.9 million voters registering. During the last presidential election a little more than 5.5 million people registered to vote.

Sykes is also concerned about the economy and health care.  She wants a political leader who will increase the odds that people have a stable source of income to afford medical treatment.

“As a graduating senior, I want and need a good-paying/stable job for when I graduate,” she said. “I need someone who will make sure we have a strong and reliable economy.”

Dowless wants U.S. prisons, which she describes as currently being “more punitive than rehabilitative,” to undergo major reform. Haugen would like police academy programs to be longer and implement de-escalation training.

“I first and foremost care about the safety of the American people,” Haugen said.

Early voting and no-excuse absentee voting are currently underway throughout the state. The deadline to request to vote absentee by mail is Oct. 23. Early voting ends the Saturday before Election Day, or Oct. 31.

Daniel and Maryann Levy invite you to visit their unique and charming hobby shop that is enhancing the character and individuality of the Stephens City community.

The Levy’s were eager to announce the opening of their full-service hobby shop on Friday, October 9, 2020, at 12:00pm. All Nation Hobby and Model Supply, Inc. are undergoing renovation, building, and relocating shelves to better promote eclectic merchandise. All Nation and Model have a small-town family ambiance and friendly expert service located right on Main Street in the historic section of Stephens City. Store hours are Tuesday through Saturday from 10 am to 6 pm.

All Nation and Model Supply’s current inventory is as follows:

In this Town Talk, we’ll have a conversation with Captain Jeff Holzbauer and Lt. Robbie Seal from the Warren County Sheriff’s Office. Lt. Seal is the Community Resource Officer and Captain Holzbauer is in charge of the Patrol Division. The Warren County Sheriff’s Office Patrol Division has the primary law enforcement responsibilities of providing a wide range of services and to initiate a proactive approach when assisting the community.

Capt Holzbauer and Lt Seal bring us up-to-date on the activities at the Warren County Sheriff’s Office. This month the emphasis is on disposing of old medications safely. On Saturday, October 24, 2020, from 10 am to 2 pm, the Warren County Sheriff’s Office will host the National Prescription Drug Take-Back Day at the Valley Health Complex at 120 N Commerce Avenue in Front Royal.

Warren County High School Band is beginning our Fruit Sale Fundraiser to help raise needed funds for our organization. Please show your support by purchasing fresh fruit for you, your family and friends to enjoy over the holidays! To place your order online, simply CLICK HERE.

After placing your online order, you will receive a receipt for your purchase via email. You will also be contacted via email regarding delivery and/or pickup options. Please retain a copy of your receipt for your records.

This year, we plan on being able to handle customers who have purchased online with touchless pickup by just having you pop the trunk, and we will place it in there for you.

For those who pre-order but plan to pay at pick up, you may use cash, check, or credit card on site.

For any additional questions, please contact our Fruit Sale Chairperson:

Join us for our second Annual Polar Plunge! Help our warm, lovely shelter animals by encouraging friends and family to sponsor your plunge! For more information on the event, please reach out to Meghan with the Humane Society — contact info below.