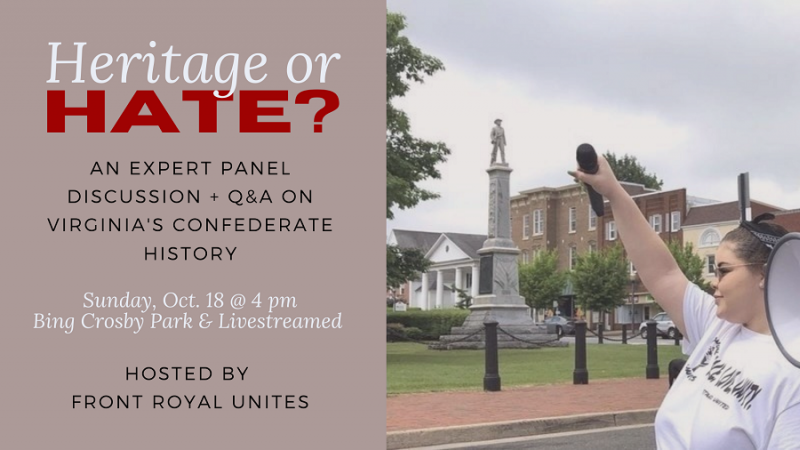 Does Front Royal’s Confederate statue represent our Southern heritage or our dark history of oppression? What is Massive Resistance? How did Front Royal navigate the Civil Rights era? Learn about these issues and more from local historians and experts through a dynamic panel and Q&A for all Warren County residents on Sunday, October 18, at 4 pm, in Pavilion 1 of Bing Crosby Park. Featured speakers include:

Please wear a mask and practice social distancing. This will be held outdoors at Pavilion 1 at Bing Crosby Park, with a virtual livestream available on this event page for those who cannot attend in person.

Mrs. Raynor was born on April 23, 1953, in Martinsburg, West Virginia to the late Joseph Glenn Farrie and Nancy Way Bozan. She was preceded in death by her father and her husband, Kevin Wesley Raynor.

A celebration of life will be held at a later date for both Lucinda and Kevin Raynor.

In lieu of flowers, memorial donations may be made to a charity of one’s choice.

Mr. Hartman was born on November 23, 1962, in Front Royal to the late Paul Sr. and Linda Fox Hartman. He was a graduate of Warren County High School class of 1982, a coach and umpire for Front Royal Little League for many years, and worked for Walmart in Front Royal and Winchester for 15 years.

The family will receive friends one hour prior to the service at the funeral home.

*NEW* or *UPDATE* indicates a new or revised entry since last week’s report.

Vegetation management may take place district-wide on various routes. Motorists are reminded to use extreme caution when traveling through work zones.

The VDOT Customer Service Center can assist with reporting road hazards, asking transportation questions, or getting information related to Virginia’s roads. Call 800-FOR- ROAD (800-367-7623) or use its mobile-friendly website at my.vdot.virginia.gov. Agents are available 24 hours a day, seven days a week.

Are your thumbs killing you?

You might not think that you’re getting a workout when you flop down on the couch to text with a friend or scroll aimlessly through your social media accounts, but at least one part of your body might disagree.

“Texting thumb,” often formally diagnosed as de Quervain’s tenosynovitis, is a repetitive stress injury that results in inflammation in the tendons of your thumb, according to Houston Methodist.

When angry tendons rub in their narrow channel, the result is pain that begins at the base of the thumb, and in severe cases, can radiate up through the side of the wrist and to the lower arm. The pain usually occurs in the dominant hand.

The thumb is the most likely culprit, but other fingers aren’t safe from mobile device overuse — according to Healthline, “smartphone finger” might cause pain or stiffness at the base of the affected finger, clicking sounds when you move your pinky, stiff fingers in the morning and numbness at in your fingertips. Smartphone pinky or smartphone finger is often more common with larger devices, like our beloved iPads and Kindles.

If you’re experiencing texting thumb or smartphone finger, you can try a few things to see if the pain subsides.

* Take a break from your devices to see if your pain subsides.

* Hot and cold therapy can help. Try ice for inflammation or heat for stiffness.

* Over-the-counter pain relievers like Tylenol or Advil can relieve discomfort.

If your pain is especially persistent, you can try a splint or brace to keep those joints stable. But if the pain continues despite rest and remedies or if you experience recurring numbness, it’s time to call the doctor.

Fiber optic internet is becoming increasingly available for homeowners. If you want to learn more, here’s a brief overview of everything you should know.

What are fiber optics?
Optical fiber is a thin, flexible plastic or glass cable that allows light to be transmitted over very long distances without losing any speed. The cable is wrapped in a protective sheath that captures light and sends data to a specific destination.

How does it work?
Optical fiber uses the principle of light refraction. The protective sheath around the cable has a highly reflective interior, which causes light to ricochet in all directions. This allows data to travel from a transmitting element to a receiving end extremely quickly. Fiber optic cables can be installed directly to and from your home or connected to a copper network.

Reasons to opt for fiber optics
Fiber optic internet is the future of broadband. The cables use light signals to send data to and from your computer up to 1,000 times faster than copper alone. This allows you to instantly download large files, seamlessly play online games, participate in online forums and enjoy high-quality graphics.

To find out if you can take advantage of these benefits in your home, contact the internet providers in your area.

One of Main Street’s popular restaurants recently underwent a name and menu change and also switched the day it devotes to “Yappy Hour.”

During the past couple of years, ViNoVa owner Rachel Failmezger and executive chef Chris Kenworthy featured a tapas menu similar to a Spanish favorite, now moving along to an Italian-Mediterranean style of cooking and changing its long-running “Yappy Hour” from Friday evenings to Mondays (4-6 p.m.). Restaurant hours of operation also have been amended, noon to 10 p.m. Sunday through Thursday (closed Tuesday) and noon to midnight Friday and Saturday.

The restaurant’s new name retains its original “ViNoVa” with the added words “Mediterranean Bistro.” The property seats about 50 and each Friday, off and on for the past decade, has helped donate thousands of dollars to the Humane Society of Warren County’s Julia Wagner Animal Shelter.

ViNoVa Mediterranean Bistro is now center stage for Monday ‘Yappy Hour’ (4-6 p.m.), a new menu, and new hours based on pandemic-driven lifestyle changes. Below, ‘Yappy Hour’ regulars Rico and Pablo show support for the Humane Society/Wagner Animal Shelter fundraiser, whatever day of the week it is held. Royal Examiner Photos by Roger Bianchini

Rachel, noting differing (earlier) eating habits since the pandemic struck, suggests closing earlier than 2 a.m. better meets the needs of an expanded staff and earlier diners, as would the changed menu.

“Overall, we will be more flexible, more accommodating,” Rachel opined in a recent interview as nearby regular customers appeared to be in agreement with the menu changes. “Whatever restaurants did two years ago, they cannot do today. It’s a new age for us,” she said, mentioning that the entrees will be larger, and there will be an emphasis on lunches, particularly the quick “take out” type featuring the “Viva Bowl” in which you choose your own ingredients for an affordable $9 “to go!”

Something to remember by early birds at the Bistro: beer and wine prices are staggered starting at $3 per glass for a beer at 3 p.m., rising to $4 at 4 p.m. and then on to $5 at 5 p.m. for the rest of the evening.