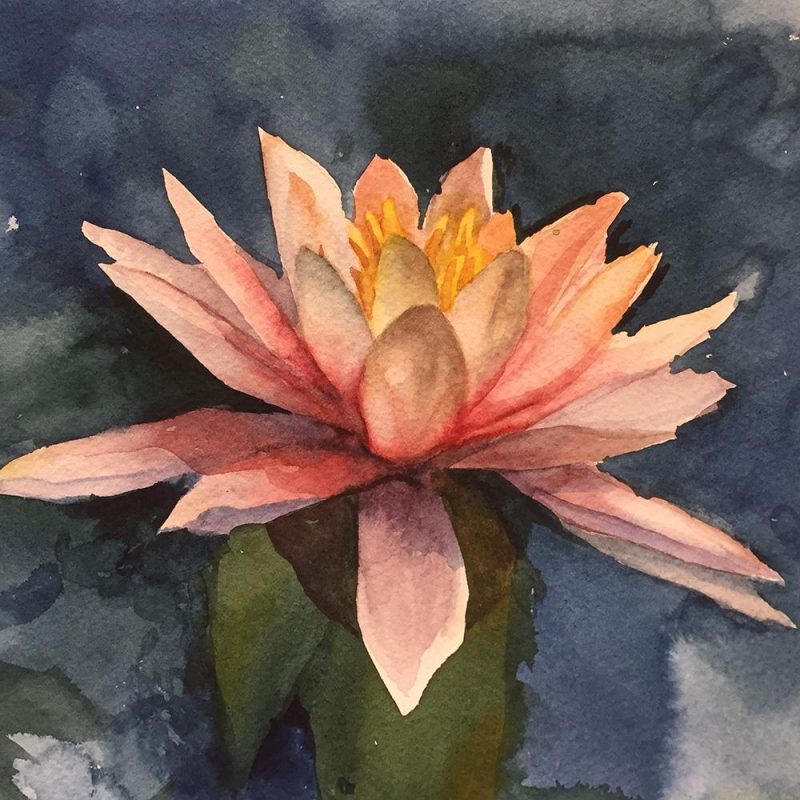 This class provides a hands-on experience for painting with watercolors, and meets once a week for five weeks. Each week we will work to build a solid foundation in technique. Materials are provided, but feel free to bring your own if you prefer. All skill levels are welcome. Instructor: Michael Budzisz

Thursday mornings from 10 am – 12:30 pm, Jan. 24th – Feb. 21st. Classes will be held in our studio at 205 E. Main St., Front Royal, Virginia. In case of inclement weather, we will reschedule the class. Please check our Facebook page for updates on class cancellations due to weather.

Class policies: We understand that scheduling conflicts do happen. You may cancel your class for a full refund up to 48 hours before the first class, by phone or in person.

An effective and affordable way to freshen up your kitchen is to paint the cabinets. For great results, follow these seven steps.


To remove fingerprints, grease, and other residues, wipe down all components of the cabinets with a solution of warm water and liquid dish soap. Rinse thoroughly and let each surface dry completely before you move on to the next step.

3. Lightly sand each surface
Remove the finish on the doors and cabinets using a sanding block with fine-grit paper. This will create a rough surface for the paint to grip. If the existing paint is peeling, you may need to start with a medium- or coarse-grit sandpaper and then finish with one that has a finer grain.

4. Remove all the dust
Sanding the cabinets will create wood dust, which needs to be removed to ensure a smooth paint job. Start by vacuuming up the loose particles, then wipe down each surface with a damp cloth. Allow the cabinets to dry completely.

5. Apply a coat of primer
An undercoat of primer helps ensure the paint’s adhesion. Be sure to apply it evenly to all surfaces. For a more eco-friendly option, choose a water-based product.

6. Add two coats of paint
Once the primer dries completely, apply a thin coat of paint to the interior and exterior of the cabinets, doors and drawers. Make sure the paint flows into the corners of any raised features. Wait at least three hours for the paint to dry before you apply the second coat.

7. Let the paint cure
To ensure your cabinets are resistant to scratches and dents, wait a week or two for the paint to harden before you reinstall the doors and drawers.

Once your cabinets have been remounted, consider getting stylish hardware and light fixtures to enhance your kitchen’s new look. These elements will help define the space’s style.

Pro-tip!
For a flawless finish, lightly sand every surface after the primer dries and between each coat of paint. This will remove dirt and dust particles that would otherwise create a rough texture.

Speeding is one of the main causes of car accidents in the United States. Here are some facts on this subject that should cause drivers to think twice before exceeding the speed limit.

1. If you speed, you won’t arrive at your destination much faster. For example, cruising at 75 miles per hour in a 65-mile-per-hour zone for 50 miles only shaves off six minutes from your total driving time.

4. The faster you drive, the more your brain is bombarded with visual information. This results in tunnel vision and a decrease in depth perception.

5. Studies suggest that if everyone drove just one mile per hour slower on urban streets, this would lead to a six percent decrease in traffic fatalities.

To sum up, there’s really no good reason to speed. Always respect speed limits and encourage those around you to do the same.

Registration will be in person upon arrival on the day of the event.

While attending this event, recommended garments are tennis shoes, eye protection, and a white shirt. If you do not want to walk, but would like to contribute or volunteer, please contact Brittany Lewis, President of Save Our Children Front Royal, at 540-692-9893 or by email: brilewis91@aol.com.

5k participants will be responsible for timing themselves.

The EDA Board of Directors convened a Special Meeting Thursday morning, October 29. Following a one-and-a-half-hour Closed Session, the Board approved a resolution to approve the Master Agreement between Warren County, the EDA, and Backroom Brewery for an Incentive Grant and Tourism Grant to Backroom Brewery as financial assistance to expand its operations.

The Backroom Brewery is the first farm brewery operation in the state of Virginia and boasts more than 25 unique approved recipes. The EDA is proud to work with Warren County and support this local business. Congratulations to proprietor Billie Clifton and we wish them continued success.

Memorials: A prominent place for honoring

For four decades we served our country, nearly 22 years stationed overseas. In many countries we visited memorials honoring those who fought and died for their home and country. While Germans share remorse for World Wars I and II, for example, they nevertheless honor their fallen soldiers with memorials that are often located prominently near the town center. The memorials, often decorated with wreaths or flowers, serve as a reminder of those who perished, the many lessons of humanity, and the consequences of wars.

The Civil War memorial in front of the Warren County Courthouse likewise serves to honor the fallen and the sacrifices of local families. It allows one to reflect upon the cost of war, the lessons of injustice, and the moral ills that plagued our country during those times. Although people interpret its symbolism differently, most see it for what it is: a memorial.

If one honestly supports democracy, then one should want the people’s voice heard. We believe the Board of Supervisors made the right decision to ask the citizens of Warren County through the ballot instead of taking unilateral action on a very politically and emotionally contentious proposal to remove the memorial.

Instead of the cost and emotional divineness of removing a memorial, maybe the citizens of Warren County could unite to erect a similarly prominent memorial to honor those who suffered under slavery in Virginia?

Acting United States Attorney Daniel P. Bubar today announced awards of more than $3.4 million in Department of Justice grants to fight drug abuse and addiction in the Western District of Virginia. The grants were awarded by the Department’s Office of Justice Programs (OJP) and are part of more than $341 million going to communities nationwide.

“The addiction crisis has taken an enormous toll on America’s families and communities, eroding public health, threatening public safety and claiming tens of thousands of lives year after year,” said Attorney General William P. Barr. “Through comprehensive measures taken by this administration, we have been able to curtail the opioid epidemic, but new and powerful drugs are presenting exceptional challenges that we must be prepared to meet. The Justice Department’s substantial investments in enforcement, response, and treatment will help us overcome these challenges and work towards freeing Americans from abuse and addiction.”

Illegal drugs and illicit drug use have claimed the lives of nearly 400,000 Americans since the turn of the century. Powerful synthetic opioids like fentanyl are exacting an enormous toll on families and communities, and emergence in the use of methamphetamines and other psychostimulants is drawing drug traffickers and driving up overdose rates. Three years ago, President Trump declared a Public Health Emergency and initiated a whole-of-government approach dedicated to ending this national tragedy. The Department of Justice has invested unprecedented levels of funding in combating the addiction crisis. The awards announced today build on those earlier investments.

“If we hope to defeat an enemy as powerful, persistent, and adaptable as illicit drugs, we must be at least as determined and versatile, focusing our ingenuity and resources on curbing abuse and fighting addiction,” said OJP’s Principal Deputy Assistant Attorney General Katharine T. Sullivan. “These grants will enable criminal justice officials and substance abuse, mental health, and other medical professionals to pool their assets and bring the full weight of our public safety and treatment systems down on this epidemic that has already caused so much harm.”

“The crisis of addiction—particularly caused by opioids—has affected Virginians of all walks of life. Addiction doesn’t care about race, religion, socioeconomic status, or age,” Acting U.S. Attorney Bubar said today. “This grant money will ensure that those groups providing recovery services for the brave men and women fighting addiction will have the funds they need to continue that fight.”
Funding is made available through OJP’s Bureau of Justice Assistance, National Institute of Justice, Office for Victims of Crime, and Office of Juvenile Justice and Delinquency Prevention.

• Total Action Against Poverty in the Roanoke Valley $474,820

For a complete list of individual grant programs, award amounts, and jurisdictions that will receive funding, click here. More information about OJP and its components can be found at www.ojp.gov.

The year 2020 marks the 150th anniversary of the Department of Justice. Learn more about the history of our agency at www.Justice.gov/Celebrating150Years