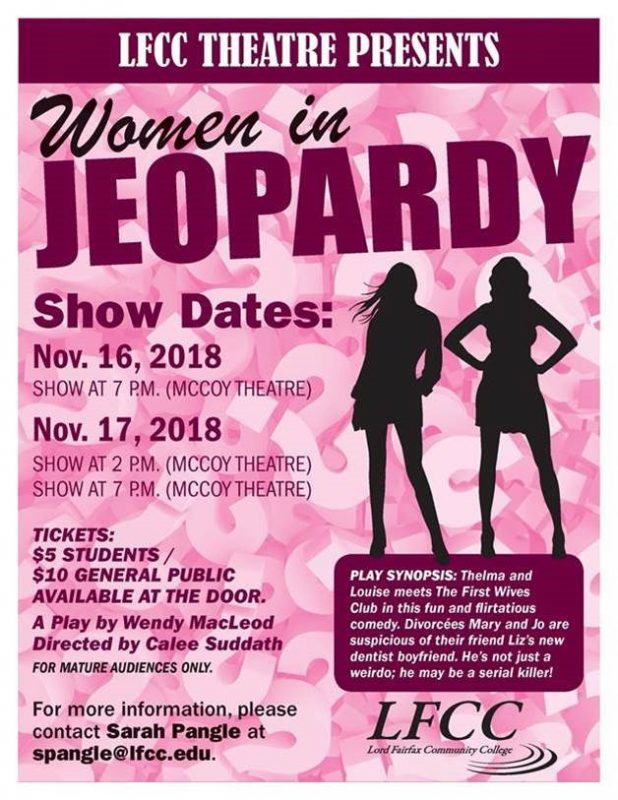 The title of Lord Fairfax Community College’s fall play may be “Women in Jeopardy,” but the only danger audience members will face is laughing so hard they miss the next lines. This year’s show is 7 p.m., Friday, Nov. 16, and 2 p.m. and 7 p.m., Saturday, Nov. 17 in the McCoy Theatre.

Billed as “Thelma and Louise meets ‘The First Wives Club’” and written by Wendy MacLeod, the play is for mature audiences only.

“The play is about three women who are best friends,” director Calee Suddath says. “They’re all divorced, and one of the women, Liz, starts dating a new man. He’s a dentist, and is a little odd.”

Liz’s friends, Mary and Jo, suspect her new boyfriend is behind the disappearance of a dental hygienist.

Tickets are available at the door, and are $5 for students, and $10 for the general public.

Six of the seven actors in the play are LFCC students, while the seventh is a former student, says Suddath, who is in the director’s chair for the seventh time. For more information, email spangle@lfcc.edu.