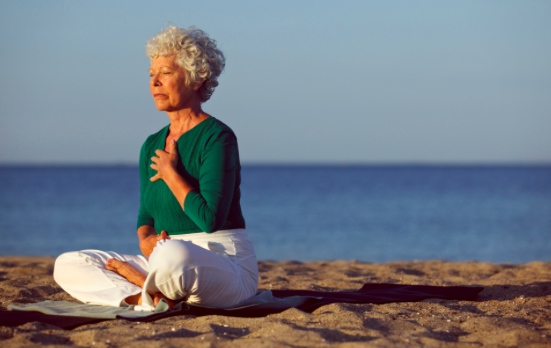 Join Ruby Yoga and Deborah Romero of Optimal Posture LLC for a series of workshops on moving more mindfully through life using the principles of yoga and the Alexander Technique. Slated for Saturday, Jan. 25, 1-3 p.m., the first workshop is Finding and Keeping Your Footing, exploring preventative poses and thoughts to prevent a fall. The second workshop is set for Saturday, Feb 22 1-3 p.m. and will cover topics in Aging Gracefully, with a focus on stability and balance. The final workshop, offered March 21 1-3 p.m., is Preparing for Spring, with a focus on strategies to prevent weekend warrior syndrome.

All workshops will be held at Ruby Yoga, 17A South Royal Ave., Front Royal. Cost is $25 per session or $60 for all three. A portion of the profits will benefit three local charities: the Humane Society of Warren County, Front Royal Women’s Resource Center, and Reaching Out Now.

For more information on the Alexander Technique, visit www.optimalposture.org. Pre-registration is encouraged as space is limited. Register at www.myrubyyoga.com.

I recently wrote an article for his column about a lesser known influence on the Founding Fathers, a man named James Harrington. I think, with the recent acquittal of President Trump and, more specifically, the vote of Senator Mitt Romney, it is worth examining another influence on the Founders. This time the man was a contemporary and a member of the British House of Commons. He was famous for many concepts, but I want to focus on his ideas of how a republic should work.

Edmund Burke was born in 1729 and was a leading statesman and political philosopher of the time. He supported the American colonies’ struggles with Britain, but did not support the Revolution. Probably Burke’s most famous quote is, “The only thing necessary for the triumph of evil is for good men to do nothing.” As inspiring as that is, I am more interested in two other quotes. First, “When the leaders choose to make themselves bidders at an auction of popularity, their talents, in the construction of the state, will be of no service. They will become flatterers instead of legislators; the instruments, not the guides, of the people. The second quote is, “Your representative owes you, not his industry only, but his judgment; and he betrays instead of serving you if he sacrifices it to your opinion.”

What Burke is arguing is that in a republic it is the duty of representatives to vote their conscience, not the will of their constituents. I know this goes against everything we think today about our democracy, but that is not the way the Founders envisioned representation. As I have said before, the function of the Constitution was to protect the people from the government and the government from the people. As much as they feared tyranny, they feared the masses even more. When it came to our representatives, the Founders believed in the idea of government by our “betters” and virtual representation.

Unlike today where we tend to want representatives who are like us, who somehow know what we are experiencing and can relate to us, the Founders envisioned our representative to be our betters. If we were going to elect someone who was like us, we might as well have a direct democracy. Instead they created a republic where the masses would choose someone who was smarter and more informed than we are to make the important decisions. This was a practice taken from the British, where the masses could vote, but had to vote for a nobleman who had the time to understand the issues. The reason the Founders chose a republic over a democracy was not just out of practicality but because most people do not have the time or ability to comprehend and study every issue and vote.

The concept of virtual representation also came from the British. Think of it this way. Once you vote for your congressman or senator, they represent all Americans. Every decision they make affects everyone, not just people in the state or district where they live. In this way they represent everyone virtually. It was never meant that our representatives poll their constituents. Instead they were to vote their own conscience or intelligence. As Burke said, representatives owe us their judgment. That is why we elected them. If we decide we do not like their judgment, that is why our representatives are voted on every two or six years.

With the acquittal of President Trump on his impeachment charges, I have actually found there is more talk of Senator Mitt Romney’s decision to vote for conviction then the acquittal itself. I assume it is because everyone already knows of the outcome of the senate trial before it even started, but the idea of a politician breaking ranks goes against the current norm. Not all, but most, of the praise for Romney is coming from the left while the vilification of the senator is coming from the right. This is not surprising. The left is praising a man who dared break ranks to stand up for what he thought was right. I have even seen the word hero being used. Of course, I doubt they would use those same words if one of their own broke ranks and voted their conscious supporting the President. Those people would be traitors.

That is how the right is seeing Romney, a traitor who is only jealous because he lost his presidential bid. Many have argued that Romney is breaking his trust with his constituents in voting against Trump. One comment I read said that he owes nothing to his faith or his family, the reason Romney claimed he voted to convict. Rather, the only people he owes anything to are the ones who voted him into office. Though I understand the frustration of the right, party loyalty has replaced virtuous representatives, but historically speaking Romney has acted exactly how the Founders expected our representative to act.

Dr. James Finck is an Associate Professor of History at the University of Science and Arts of Oklahoma and Chair of the Oklahoma Civil War Symposium. Follow Historically Speaking at www.Historicallyspeaking.blog or Facebook at @jamesWfinck.

This week’s showtimes at Royal Cinemas as of February 27th

Are you looking for the full movie-going experience without having to wait in the long lines that often accompany that experience? Then look no further because Royal Cinemas movie theatre is the answer. Get the whole gang together and enjoy a movie! Here is a list of this week’s showtimes at Royal Cinemas as of Thursday, February 27:

Able Forces Foundation will once again be hosting a visit by Andre Miller, Resource Specialist, Virginia Veteran and Family Support, Department of Veteran Services, Commonwealth of Virginia, and Danielle Cullers, Homeless Veteran Advocate-Volunteers of America on Friday, February 28, 2020, from 9 a.m. to noon.

As the VA does not have an office here any longer, Able Forces is making space available each month so that local veterans and their families have local access to VA representatives regarding claims, forms, or any other matter related to Veteran issues.

If you are interested in meeting with Andre or Danielle, please call our office at 540-631-9600 to make an appointment, or just come by 115 Chester Street, Suite B.

What to expect the first week of summer camp

Is your child anticipating their first summer camp experience? If so, knowing what to expect may reassure them — or simply satisfy their curiosity. Here’s some information you may want to share.

Their first day
When they first arrive at camp, kids will be able to check out the area, meet their fellow campers and get to know their counselors. There will also likely be games and activities that allow everyone to get to know each other.

What they’ll do
Most summer camps offer an array of activities for kids to learn, explore and have fun. And whether it’s a specialized camp or a more traditional one, the itinerary is sure to include singing around a campfire.

Where they’ll eat
Generally, meals at camps are served in a cafeteria similar to the one where your child has lunch at school.

What if they get hurt?
Everyone who works at the camp should be trained in basic first aid and will be able to deal with regular cuts and scratches. There should also be a nurse available onsite to help with anything more concerning.

Where they’ll sleep
Your child may sleep in a tent, dormitory or shared bedroom, depending on the type and location of their camp. One thing that’s common to all camps is that boys and girls sleep in different areas and that counselors bunk separately.

If your son or daughter still has questions, don’t hesitate to contact the camp. They’ll be happy to assuage any fears and share more information.

How to feature bright colors in your wedding

An increasing number of brides and grooms are incorporating bright colors into their wedding outfits and decor. Here’s how to do the same.

Choose the right color
While red, orange, yellow, green, blue, indigo and violet look great on a rainbow, it may be overwhelming to use them all at your wedding. Instead, choose only one or two of your favorite colors.

Or, choose colors based on the meaning behind them and the feelings they evoke. For example, green is the color of renewal and balance, while blue calls to mind feelings of serenity and peace.

Use color judiciously
Incorporating colors into your wedding doesn’t mean everything should be bright and bold. Instead, favor neutrals and use your chosen hue as an accent here and there. The bride’s bouquet, bridesmaids’ dresses, centerpieces and the groom and groomsmen’s ties are perfect places to inject a vibrant shade.

For a look that’s rich and voluptuous, be sure to use different shades and textures of your chosen color.

Demolition and lane closures to occur during nighttime hours

Demolition continues during overnight hours this week on the ramp from I-66 West to Route 123 (Chain Bridge Road) South over I-66 to make room for the future reconstructed Route 123 Interchange, as part of the Transform 66 Outside the Beltway Project. This demolition activity must occur during the overnight hours, as multiple lane closures and temporary traffic stoppages on I-66 are required to safely complete this work.

What Nearby Residents and Drivers Should Expect:

• Five nights of demolition-related activity remain during this phase. The schedule will be adjusted if weather delays occur.

• Nearby residents may hear unavoidable construction-related noise during demolition operations.

• Drivers should plan for nightly lane closures for the demolition work on I-66 East between Route 50 and Route 123 with occasional 20-minute stoppages between midnight and 4 a.m. (5 a.m. on weekends).

Crews completed the removal of the concrete bridge deck of the Route 123 ramp over I-66 on Sunday night, Feb. 23. Demolition activities that don’t require multiple lane closures on I-66 will occur during daytime hours.

Demolition of the I-66 bridges over Fairfax County Parkway (Route 286) is also scheduled to continue this week. Nightly lane closures on I-66 East and Route 286 North and South will be implemented to safely accommodate this work.

All work is weather dependent and will be rescheduled if inclement conditions occur. Find additional details on planned traffic closures at www.Transform66.org.