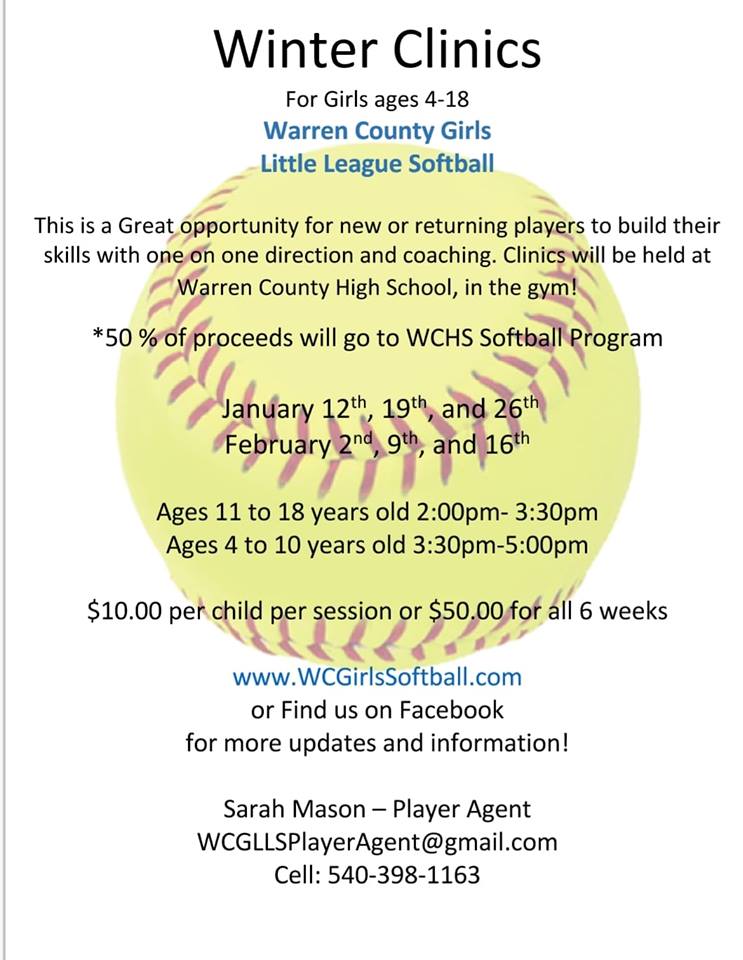 Warren County Girls Little League Softball is proud to announce that Winter Clinics start Sunday, January 12th at WCHS. This is a great opportunity for one-on-one direction and coaching during our skill building activities! Winter clinics are walk up/No registration required! Come to one or come to all! See image attachment above for all the dates and times for the clinics.

Spring Registration is now OPEN! Don’t miss out on the Early Bird discount! Need to make payments? Just set the amount you want to pay today and sign back into your account to make payments on your schedule: www.WCGIrlsSoftball.com (For more information, contact: WCGLLSPlayerAgent@gmail.com)

While there was yet to be an official crowd size estimate, it appeared that well over one thousand, perhaps between 1200 and 1500 people gathered at Bing Crosby Stadium off a flooded Eighth Street Bridge for the Front Royal Unites rally against racism early Friday evening, June 5th.

Oops, looks like I can’t get in this way – a huge crowd of demonstrators against racism and for unity across social and racial boundaries gathered at Bing Crosby Stadium early Friday evening, June 5. Royal Examiner Stills/Roger Bianchini – Royal Examiner Video/Mike McCool

Several organizers spoke to kick off what was planned as about an eight-block circular path march beginning westbound on Eighth Street to North Royal Avenue, left to Sixth Street, left on Commerce and back to Eighth and Bing Crosby Stadium. But with the heavy rains that began mid-afternoon suddenly flooding the bridge, the march detoured southbound on Crosby Road out of the stadium parking lot to Sixth Street and across Commerce to North Royal and back around to Eighth Street and ultimately back to the Stadium for closing speeches.

And while the rain was hard in the hours leading up to the rally, the skies lightened and the rain stopped about a half-hour prior to the rally’s 6:30 p.m. start.

The Front Royal Unites rally grew out of the nationwide reaction to the brutal and unprovoked videotaped treatment of George Floyd at the hands of four Minneapolis, Minnesota policemen in what some are equating to a modern-day lynching. All four officers were immediately fired upon release of a videotape of their collective action leading to Floyd’s death.

The message of Front Royal Unites was consistent …

Derek Chauvin, the white officer who knelt on Floyd’s neck for nearly nine minutes as the black man plead for his life, saying he could not breathe and was dying, has been charged with 2nd Degree Murder and the other three have been charged with complicity in 2nd Degree murder and related manslaughter charges.

And while violence has been an issue from both demonstrator and police at some consequent demonstrations across the country, the Front Royal crowd was peaceful, the message was “Love, Love, Love – not hate”.  As the march began a spirit of unity seemed prevalent between demonstrators and a combined local law enforcement presence of Front Royal Police and Warren County Sheriff’s Office personnel as both crowd and traffic control, as well as supporters of the message of community unity across racial and uniformed/non-uniformed boundaries.

… including on the back of a kickoff speaker’s shirt – and the marchers remained peaceful, and focused on the message of a march against racism and for community unity.

A report from one person who participated in the entirety of the march told us the crowd remained peaceful, encountering some minor verbal harassment from a very small minority of onlookers along the way. Some pickup trucks sporting Confederate flags were also observed at some distance from the marchers, but there was no encounter between occupants and marchers observed.

See for yourself the message, the march’s outset, and conclusion in this exclusive Royal Examiner video and accompanying still photographs:

If your property doesn’t provide you with enough shade, here are four stylish structures that can give you a break from the sun.

1. An awning
This type of device can be rolled out over a patio or deck when you need shade and is easily retracted when not in use. However, it needs to be secured to an exterior wall first. Although typically controlled by a hand crank, some newer models open and close with the press of a button.


This sturdy structure consists of a metal frame with four pillars and a canvas roof. Some models include curtains that can be closed for privacy or to block the sun.

3. An arbor
This classic garden feature is often used to create an entryway. However, since its arches are typically lined with vines and other climbing plants, it can also offer respite from the sun.

4. A folding canopy
This temporary structure can be unfolded and set up within minutes. It’s a practical solution for backyard parties and picnics when you need to accommodate a number of guests.

All of these structures can provide you with ample shade and a comfortable place to lounge in your backyard. This summer, minimize the risk of getting sunburned by installing one or more of these devices.

Yogurt is a popular food, but did you know it also has many health benefits? It’s rich in nutrients and proteins, helps maintain digestive health and can even enhance your immune system. To celebrate National Dairy Month, which occurs every June, here’s what you should know about common types of yogurt.

Traditional yogurt
If you crave a smooth, creamy treat, then traditional yogurt is for you. It’s by far the most well-known and widely available type of yogurt. It can be made with whole or skim milk and is a healthy snack that people of all ages can enjoy.


This popular type of yogurt has twice as much protein as traditional yogurt. It also has a much firmer texture, which is obtained by straining the yogurt before packaging it. Generally speaking, Greek yo¬gurt has less sugar and fewer carbohydrates than traditional yogurt. It’s both a tasty snack and a versatile cooking ingredient.

Icelandic yogurt
Also known as skyr, Icelandic yogurt is high in protein and thicker than Greek yogurt, although it’s smoother in texture. It’s very low in fat and contains a lot of calcium, making it a healthy snack as well as a smart addition to your morning smoothies.

Kefir
If you’re particularly interested in the probiotic benefits of yogurt, then kefir is for you. This naturally carbonated and fermented yogurt drink is high in protein, calcium, minerals, and vitamin D. Thanks to its long fermentation process, it provides a range of beneficial bacteria, which can help improve your gut health.

Yogurt is tasty food, and there are many ways to enjoy it.

4 tips for moving in the rain

Does it look like it’s going to rain on moving day? Here are four tips to ensure the move goes well, despite the bad weather.

1. Dress appropriately
Sturdy rain boots and a waterproof jacket will help keep you dry during your move. A pair of work gloves can help you maintain a firm grip on slick furniture. Make sure you keep a few towels and a change of clothes on hand for later.


Cover your furniture in heavy blankets or plastic wrap, particularly wooden, upholstered, and metal pieces. Use garbage bags to protect your pillows, clothes, and artwork. If possible, pack books and documents in waterproof bins. Otherwise, seal delicate items in plastic bags before putting them in cardboard boxes.

3. Cover the floor
Lay down tarps, old towels or cardboard boxes to avoid tracking mud inside the home and to prevent anyone from slipping on a wet floor. Line the bottom of the truck as well to ensure it’s waterproof.

4. Create an assembly line
Assign specific people to ferry items to and from the house while others gather your belongings by the door or pack them in the truck. This will help keep the inside of your home and the truck clean and dry. Only move items as they’re needed to minimize their time in the rain. If possible, hang a tarp over the space between the door and the truck.

Once the truck is unloaded, quickly unpack all wet and damp boxes to avoid water damage. Additionally, make sure the wires for your electronics are completely dry before plugging them in.

How to get rid of your golf slice

Among amateur and intermediate golfers, slicing the ball is a common problem. Typically, it’s caused by an outside-to-inside swing path that leaves the clubface open at the moment of impact. This sends the ball careening off to the right if the golfer is right-handed. Here are some tips to help you eliminate your slice and send the ball straight down the fairway.

Adjust your setup
Many golfers line up with the ball too far forward in their stance. This leaves the clubface open at the moment of impact and prevents the golfer from properly releasing the club. To help get rid of your slice, experiment with moving the ball a bit further back in your stance.


A good golf swing starts with a good grip. It’s common for players who slice the ball to have their top hand too far underneath the club, which results in an open clubface. As a rule, you want to be able to see three knuckles on your left hand.

Tuck in your elbow
If your grip and setup are fine, then the issue is likely with your swing. One of the most common swing mistakes among players who slice is flaring out their right elbow during the backswing. This pulls the club away from the body, resulting in an outside-to-inside swing. To ensure your club follows a straight path, keep your right elbow as close to your body as possible during your backswing.

If following this advice doesn’t deliver your ball onto the fairway, consider taking one or more lessons from a golf instructor. You’ll likely benefit from more personalized pointers.

Traveling with your pet

With careful planning, traveling with your pet can be easy and fun. Here’s how to prepare for a trip with your cat or dog.

Plan carefully
Many hotels, vacation rentals, and campgrounds welcome pets as long as certain rules are followed. If you’re traveling by air, be sure to contact the airline directly to familiarize yourself with their rules and regulations regarding animal transportation.

Make sure your cat or dog always wears a tag with your contact information on it. Additionally, it’s a good idea to keep photos of your pet handy. These will be invaluable if your animal gets lost.

Visit the vet
Make an appointment with a veterinarian. You’ll want your pet to have a clean bill of health and be up to date on their vaccinations before setting out. If you’re traveling internationally, check the other country’s rules for bringing pets over the border. Some require proof of vaccination and/or that the animal is microchipped.

Get your pet ready
If your four-legged companion isn’t used to traveling with you already, bring them on short trips beforehand to prepare for the big one. Make sure your pet has a crate that’s large enough to stand up and turn around in and that they’re comfortable spending time inside of it.

Additionally, it’s a good idea to take your dog for a long walk or play games with your cat before setting out. Being tired may make them less anxious.

Once your trip has begun, keep your cat or dog calm and comfortable. Provide reassurance by petting it and speaking to it in soothing tones. Make sure your pet has enough to drink and eat and let them out for potty breaks as often as you can.