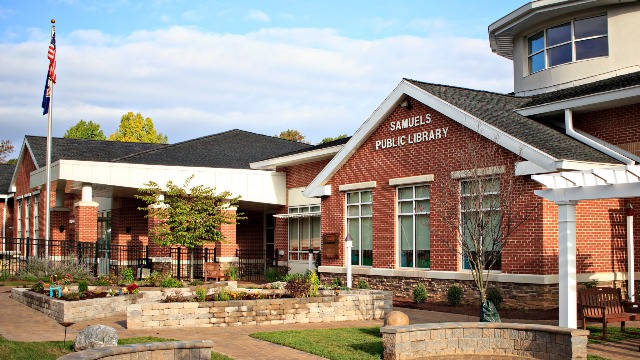 Children ages 5 and up are invited to explore all the amazing things you can do with Legos. Registration begins November 28.

If you are not familiar with our Front Royal Thermal Shelter, here is some information provided to us by Michelle Smeltzer, a member of the Rotary Club of Warren County and Community Liaison for the Department of Social Services:

“The Front Royal Thermal Shelter gives the homeless of Warren County a place to stay warm during the winter months. The shelter is not in a fixed location – rather it is a cooperative effort by eight churches in the area, including New Hope Bible Church, Front Royal United Methodist Church, Front Royal Presbyterian Church, Marlow Heights Baptist Church, Riverton United Methodist Church, Virginia Hills Church, First Baptist Church and Dynamic Life Church. The guests are provided supper at about 7:30 each evening, and the volunteers join them. After supper, the volunteers join them and they play a variety of games, watch TV, or simply lie down on their cots after a tiring day. As the guests noted, this makes them feel as if someone really cares about them. Michelle said this makes a world of difference to them, because they too often feel alone and abandoned, as if the outside world ignores them. The following morning several of the churches provide breakfast, and some provide a bagged lunch when they leave for the day. The guests are assigned a cot when they arrive at the church, and that is their bed for a week. There are separate sleeping areas for men and women, and the program does not allow guests or volunteers with the program until they are at least 18 years of age because they are a no-barrier shelter. This year the shelter has also made arrangements, with the help of the Warren County Humane Society, to provide shelter for homeless pets of the guests.”

Michelle Smeltzer, a member of the Rotary Club of Warren County.

Remember – there are still many cold days ahead! Current update: The Front Royal Thermal Shelter’s greatest need is cash donations at this time: Here is an easy PayPal link. You can also visit their website to donate or learn more.

Together we are making a huge difference in this community! Thanks to all!

Making your dream home: advice for the would-be builder

Are you thinking about building your own home? While there are many advantages of designing a space that works for your family in every way, here are some things you should consider before breaking ground.

Location
Do you want to live in the city or suburbs? If so, it may be hard to find an unoccupied plot. In this case, you may need to look further away from your desired location in order to find land where you can build.

Blueprints
If you build the house in a subdivision, you may be able to use pre-made builder’s plans. However, for a more customized home, you’ll need to hire an architect instead.

Lifestyle
When making design choices, it’s important to think about how you plan to use the house both now and in the future. For example, a steep set of stairs may not seem like a big deal right now, but they may prove difficult if you choose to raise a family or grow old in your home.

If you do decide to build, remember that the home will eventually need to be sold. For this reason, it’s a good idea to make design choices that aren’t so luxurious that you’ll be priced out of the area or that are so quirky that other people won’t want it.

The zero-waste grocery store: what you should know

Thanks to the rising consumer demand for sustainable products and services, zero-waste grocery stores are popping up worldwide. If you’re unfamiliar, this kind of supermarket is one that offers the same types of goods found at a regular grocery store, minus all the packaging. Here’s what you should know.

Why recycling isn’t enough
Though packaging materials can usually be recycled, producing them requires a combination of raw materials and energy. In addition, recycling itself isn’t a completely green process, as it requires a considerable amount of water and chemicals. Reusing and reducing are greener practices by far.

How zero-waste stores operate
The main objective of zero-waste grocery stores is to reduce the amount of waste that ends up in landfills. Here’s how it works.

• You’ll also need Mason jars or another type of container to transport your dried goods, sauces, cleaning products and other items.

• You’ll need to weigh your empty containers and write their weight down so it can be deducted when you pay at the cash.

• It’s recommended that you fill your bags and containers with only as much as you need.

If you don’t already have the reusable containers you need, most zero-waste stores carry them.

Are you ready to reduce the amount of waste your household produces? If so, look for zero-waste stores, farmers’ markets and bulk stores in your area.

Lynette Lane explains how to build an NFT system at the start of the J-Term. This photo was from the first week of the J-Term classes. Additional photos showing more of the completed lab will be available later this week upon request.

On Thursday, January 23, 2020, Randolph-Macon Academy will introduce its new hydroponics lab to the R-MA community during an open house from 3 pm to 4 pm. The lab features five different kinds of hydroponic systems, all of which have been built by students taking the “Hydroponics and the Food We Eat” J-Term (January Term) class. Each system has been built with materials purchased at Lowes or on Amazon – such as gutters, plastic containers, hoses, boards and lights – developing systems the students can later recreate for themselves at home.

“We’ve been kind of hands-off,” commented Lynette Lane, the R-MA science teacher who is leading the project. “Sometimes I have to show them very specific steps or techniques, but then they have to figure out how to get it done. It’s been really great. Students have stepped up to do things that have really surprised me.”

The lab includes various systems, such as a Nutrient Film Technique (NFT), which will allow the students to harvest lettuce weekly. A deep water culture (DWC) is a non-circulating water system in which the students will grow basil, chard, and other greens. The students will grow microgreens in a bottom watered, coco coir system. The R-MA lab’s Dutch buckets will contain strawberries and peppers. The final system the students will build is a flood and drain one used for seedling propagation.

An earthworm composting process has also been created; this will make use of any leftover organic matter from the lab systems. In early May, earthworm castings will be removed from this system to be used as nutrient-dense fertilizer for spring plantings.

“I  think it’s so important for kids to see where food comes from, because most of them  just don’t know,” said Ms. Lane. “And a lot of these students come to R-MA from countries where growing food is problematic, because they don’t have land, they don’t have water. They can take this back. It uses 95% less water than conventional methods of agriculture.”

Although the J-Term ends January 24th, a hydroponics intramural class and the Environmental Science and Biology classes will continue to grow the plants throughout the spring semester.  The lab will start again in the fall, and run through the school year, providing leafy greens and microgreens for the community.

The pleasures of riding

Have you always loved animals and the great outdoors? Why not finally unite these two passions by signing up for riding lessons? Not only will you be able to stay in shape, but you’ll also be able to relax and enjoy the outdoors all year round.

Riding is much more than just sitting on a horse. Although it is an individual sport, teamwork is required between the rider and his or her mount—in a way, it is really all about developing a relationship with the horse. Consequently, it is essential to get to know your horse and the way it behaves so as to make the most of the experience. In addition to practical experience, riding lessons also include a bit of horse care theory.

Can horseback riding really be considered as a sport? Isn’t it the horse that does all the work? Actually, no. Riding develops balance, lung capacity, and muscle tone, which is essential for both good posture and guiding the horse. The muscles of the shoulders, back, and thighs, as well as the abdominal and gluteal muscles, all have their role to play. Different skills and levels of physical effort are required by the rider for walking, trotting, cantering, galloping, and jumping. Riding is also a great activity for improving self-confidence, as a great deal of mastery is required to guide a horse and to be ready to deal with the unexpected.

You might prefer to have quality time alone with horse and trainer by treating yourself to private lessons. Group classes are generally more affordable and are fun if you’d like to enjoy some time with friends.

Riding is all about collaboration between rider and horse.