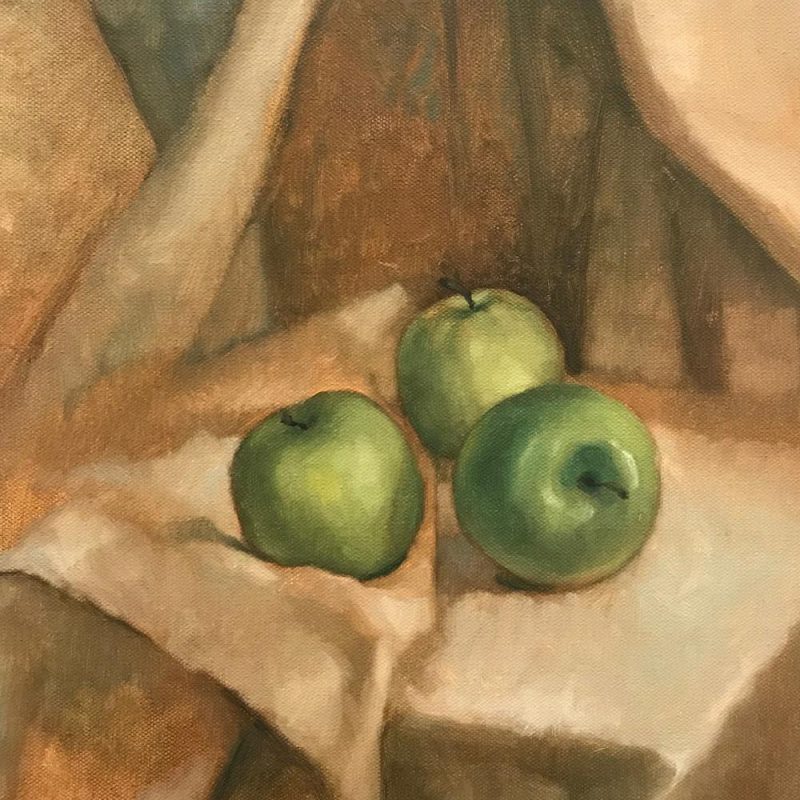 This class provides a hands-on experience for painting with oils. Learn to set up a palette, mix color, and apply paint to create a finished work of art. Class meets once a week for five weeks. Each week we will work to build a solid foundation in technique. Materials are provided, but feel free to bring your own if you prefer. All skill levels are welcome. Instructor: Michael Budzisz

Class policies: We understand that scheduling conflicts do happen. You may cancel your class for a full refund up to 48 hours before the first class, by phone or in person.

Join the Humane Society of Warren County on Saturday, November 14th, for our 9th annual Tails and Ales fundraising event. Tickets are only $10 as we are going virtual in 2020. We will hold an online auction, and your ticket purchase gets you the link to our bidding site and entry into the door and grand prize drawings. Grand prize includes a one-night stay at the beautiful Mimslyn Inn, dinner for two, tickets to Luray Caverns, a $100 VISA gift card and two Tails and Ales souvenir glasses.

You must provide your email address when purchasing tickets. We will send you a link to the bidding site (Bid Beacon) two weeks prior to the event to preview baskets. The auction will begin on November 14th, and end on November 16th. 50/50 tickets will be sold directly from Bid Beacon.

Tickets can be purchased in person at the Humane Society of Warren County, located at 1245 Progress Drive, Front Royal, over the phone by calling 540-635-4734 ext 221, or directly from our website.

HSWC would like to thank our sponsors: Front Royal Federal Credit Union, Caroline Craig and Peace of Mind Pet Sitting!

A growing number of Virginia colleges are announcing that spring break will be canceled or modified in an effort to mitigate the spread of COVID-19.

Virginia Tech, located in Blacksburg, announced plans Monday. The biggest change is that the university will not have a week-long spring break. It will instead have five one-day breaks spaced throughout the semester.

“While we want to discourage travel that could aid in the spread of COVID-19, we don’t want to eliminate much-needed downtime that students seek for their overall well-being,” Frank Shushok, vice president for student affairs at Tech, said in a news release.

Tech will hold a mix of in-person and hybrid classes. The latter will be fully online or a mix of online and in-person courses. The university did not modify the start and end of the spring semester. The university will begin classes on Jan. 19 and end on May 5. Exams will be held May 7-12.

Other Virginia universities have started to announce plans for the spring semester. George Mason University in Fairfax announced Monday plans to start classes on Jan. 25, one week later than originally planned. GMU will also be eliminating spring break. The university will hold a mix of in-person, online, and hybrid classes, and will end classes as originally scheduled on April 30, followed by final exams.

Radford University in Radford will start classes on Jan. 19 as originally planned and hold spring break at the end of the semester, concluding classes a week early. Classes will be a mix of in-person and hybrid format and end on April 23. Exams will be held the following week.

Virginia Commonwealth University in Richmond announced last week that it will start the semester a week later than originally planned. VCU will hold two one-day breaks; one in February and one in March. The university will offer in-person and online classes or a mixture of both formats.

“This measure is consistent with many other universities in Virginia and across the country,” VCU President Michael Rao said in an email announcing the move.

Christopher Newport University in Newport News announced a tentative spring 2021 academic calendar on Oct. 7, which includes a shortened, two-day spring break in March. Classes at CNU will begin on Jan. 11 and final exams will end on April 29.

Many Virginia colleges have not announced their spring semester plans. The University of Virginia, located in Charlottesville, will announce plans later this month, UVA spokesman McGregor McCance said last week.

Americans haven’t been shy about stocking their quarantine pantries with candy — sales were up 6.3 percent during the 17-week period ending at the end of June.

But what will happen with the huge eight-week selling season for Halloween?

The Hershey Company expects a reasonably good season, though they have prepared for a dip.

The Halloween season accounts for 10 percent of the candy business, with Americans purchasing about 600 million pounds for the spooky days. About 90 million pounds of that is chocolate.

Candy makers aren’t that worried about Halloween, since they believe families will find ways to celebrate even if quarantine orders are in place. After all, kids can always wear, you know, masks. In addition, there is no evidence that the novel coronavirus survives on the packaging.

At Hershey, the company has decided to make fewer Halloween-specific packages, but continue making packages of bite-sized treats.

According to Hershey, about 55 percent of their Halloween sales are for the home or office candy bowls.

Military and Veteran families are welcome to come by the Able Forces Foundation office if you have issues with VA benefits, or need assistance or guidance on issues. Andre Miller of the Department of Veterans Services, and Danielle Cullers, our area’s Homeless Advocate, will be at our office from 9AM to Noon on Friday, October 23, 2020.

Please call for an appointment if possible: 540-631-9600. Our office is located at 115 Chester Street, Suite B, in Front Royal. Strict COVID protocols will be followed.

12 ways to winterproof your property

Winter weather can take a toll on your home’s exterior. However, if you take precautions, you can protect it from getting damaged. Here are 12 essential tasks to complete before the season’s first snowfall.

1. Inspect the roof. Clear off leaves and other debris so you can examine the shingles. Replace any that are damaged or worn out.

2. Clean the window wells. Remove all leaves, sticks, and other debris. Make sure the drains are clear to prevent water from pooling and possibly leaking into your basement.

3. Empty the gutters. Once the trees on your property have shed their leaves, remove all debris from your gutters. Clogs can lead to ice damming and even water damage.

4. Check the foundation. Look for cracks and repair them before winter. Otherwise, water can seep into the concrete and cause more extensive damage when it freezes.

5. Sweep the chimney. Hire a professional to remove soot and creosote from the flue to prevent a fire. Make sure the chimney cap is intact so critters can’t sneak in.

6. Install the vent covers. Keep out cold air and pests by installing covers over the exterior vents for your dryer and range hood. Otherwise, check that the existing ones are in good condition.

7. Close the pool. Clean out the filter, drain the pool about halfway, and disconnect the pump. Remember to remove the ladder before you install the winter cover.

8. Plant the bulbs. Get all your spring bulbs in the ground before it freezes. Remember to cut back perennials.

9. Tidy up the yard. Rake the leaves, clean out the gardens, aerate your lawn and add mulch or compost as needed.

10. Protect the shrubs. Wrap bushes and saplings in burlap or tree wrap, and bring potted plants inside.

11. Prune the trees and hedges. Cut away branches that are close to your home to avoid winter storm damage. This will also help prevent animals from climbing onto your roof.

12. Put away summer items. Clean the grill and disconnect the propane tank before you cover up the barbecue. Drain the sprinkler system and shut off the water supply. Wipe down and store the patio furniture.

Since fall is a busy time for arborists, pool technicians and other professionals, be sure to schedule your service calls sooner rather than later.

This week’s showtimes at Royal Cinemas as of October 23rd

Are you looking for the full movie-going experience without having to wait in the long lines that often accompany that experience? Then look no further because Royal Cinemas movie theatre is the answer. Get the whole gang together and enjoy a movie! We are continuing to practice “6 Foot Social Distancing” with 50% capacity reserved seating in all auditoriums.

Here is a list of this week’s showtimes at Royal Cinemas as of Friday, October 23: