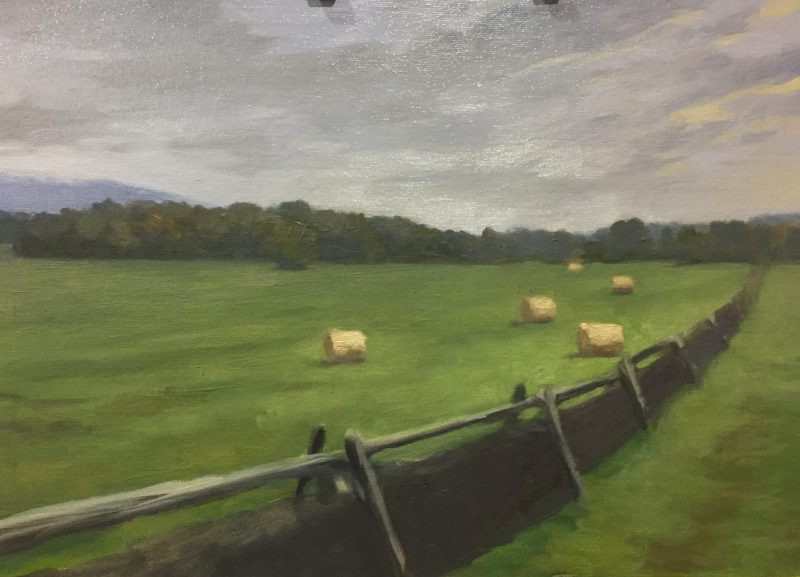 This class provides a hands-on experience for painting with oils. Students will focus on techniques for painting landscapes. Class meets once a week for five weeks. Materials are provided, but feel free to bring your own if you prefer. All skill levels are welcome. Instructor: Michael Budzisz

Class policies: We understand that scheduling conflicts do happen. You may cancel your class for a full refund up to 48 hours before the first class, by phone or in person. No refunds will be issued after this time.

In case of inclement weather, we will reschedule the class. Please check our Facebook page for updates on class cancellations due to weather.

In this Town Talk, we’ll have a conversation with Fern Vazquez and Betty Showers about the community “victory garden” off Luray Avenue. Fern and Betty will give us an update on the Community Garden and plans for next year.

On Saturday, September 19, the Virginia Beer Museum cut the cake on its fourth anniversary of lauding, not only the Commonwealth’s current barley crop of crafted beers, but noted Virginians like George Washington and Thomas Jefferson’s contributions to Virginia and the American colonies history of brewing their way right up to independence.

And that’s something worth raising a glass of fine Virginia-brewed beer to – the museum’s fourth and America’s history of a march toward “all men created equal” under the law celebrated every 4th – of July. Keep the faith in that march, kids – someday.

The appropriately named Play the Changes band mixed classic rock covers and original material to an enthusiastic crowd spanning a several generation gap that appeared to agree that BEER was the vote to make, at least for those of age that Saturday evening in Historic Downtown Front Royal, Virginia.

Musical entertainment was provided by Play the Changes, above on stage; and below between sets sporting their new ‘Vote BEER’ T-shirts. For those interested, Downes ‘BEER Party’ platform is: Better government Encouraging cooperation Emphasizing non-partisan politics Responsible government.

Play the Changes played to an appreciative audience, largely gathered under the big top as the sun set toward some plummeting crisp, Fall temperatures. Get near those space heaters!

A long-awaited overpass needed to help emergency services, fire trucks and ambulances react to urgent 911 calls may become a reality, according to the Virginia Department of Transportation (VDOT) – but not until 2015, if then.

In a presentation to the Rotary Club of Front Royal, September 18, Ed Carter, a VDOT official with an office in Edinburg, estimated a fall construction date starting in 2023 which should see the bridge opening in the spring of 2025 – a date that will be 25 years in the making.

According to Rotarian and former Warren County Administrator Doug Stanley in a telephone exchange last year, it had been 20 years since problems with the railroad companies first surfaced, but then, complaints were scarce. In the past several years, however, rail traffic has increased to the extent that traffic holdups at some crossings have been reported to range to an hour, if not longer.

Another five years before we’re past this? Public Domain Photo <publicdomainpictures.net>

In addition to emergency service inaccessibility, another effect of increased train traffic for residents of the area is the wait for drivers who need to be downtown or elsewhere to keep doctors and dentists appointments, veterinarian treatments for sick animals, or other scheduled meetings – even shoppers are becoming more irritated by the train crossing barriers coming down.

While describing the noticeable increase in train traffic and the length of many trains, some requiring two and three locomotives to pull and/or push heavier loads, Carter suggested some of the complaints may be overblown – “when sitting waiting, four minutes might seem like an hour.” (see editor’s note at story’s conclusion)

The railroad companies estimate a top waiting time of about 15 minutes. Carter also blamed the current installation of “third rails” for the extra train traffic that have added to the cost of a bridge.

The original estimate for the overpass was $15.5 million, which effectively is in the bank; and pre-construction work has begun. However, the railroad companies’ “third rail” has added almost $6 million to the project, and all that extra money is not yet in hand.

“(Residents) are going to have to put up with train blockages for quite a while longer,” Carter said, adding that a public hearing on the project is slated for the spring of next year.

The estimated 200-foot long bridge, two lanes (24-feet) wide, will “straighten out the two curves on the Rockland Road approach. He also observed that the bridge would be “quite high.”

Answering a question, Carter said trucks will be fed on to the relatively narrow country road, up to and including the size of tractor trailers. A questioner suggested that two trucks coming along the road in separate directions may not be able to pass one another without one pulling over.

Another Rotarian observed that there are already distinctive marks on either side of the road where mostly cars apparently have run off the road in passing from opposite directions.

While announcing that preparations for bridge construction had already begun despite the wait for extra (federal/state) funds, he described initial problems where underground caverns “close to the right of way” had been discovered and were a concern to engineering crews.

Carter, answering another question, said it would help if drivers held up for long periods would call the sheriff’s office for the record, suggesting that “we cannot control the railroads which got the right of way… many years ago” but observing that record-keeping of delays would be helpful in future discussions.

(Editor’s note: While driving to his Rockland home following the Rotary meeting, the writer was held up by a train at the Rockland Road crossing for a measured four minutes. “It seemed like an hour,” he confirmed.)

The Town of Front Royal Water & Sewer Department will be installing utility lines on W. Duck St for new dwellings on September 23, 2020, from 7:30 am to 5 pm. Duck Street will be closed from Forrest Hill Drive to the first VDOT entrance. Residents in Hensel Stone Subdivision will be detoured up Forrest Hill Drive.

Detour signs will be in place. Motorists are asked to use caution while driving in this area and be aware of signs and crews working.

We apologize for any inconvenience. Questions? Please call Public Works 540-635-7819

SALEM, VA — Students, schools, and youth groups across Virginia are kicking off a statewide campaign this week to increase seat belt usage rates among teens and youth.

Through a new, virtual format, the five‐week campaign, Drive for Change: Buckle Up and Slow Down will encourage youth and teens to develop a lifelong buckle up habit by reminding them that seat belts are their best defense against injury and death in a crash. In 2019, 65 teens aged 15-20 were killed in crashes in Virginia and of those teens, 56% were not wearing seat belts. According to the Virginia Department of Motor Vehicles (DMV), 2020 preliminary data reveals 37 teens have been killed on Virginia’s roadways from January 1 through August 31, 2020 and of those, 19 (59%) were unbelted.

“The simple step of buckling a seat belt saves lives but, sadly, we are seeing an increase in the percentage of unrestrained teens killed in crashes in Virginia this year,” said Mary King, YOVASO Program Manager. “Through the ‘Drive for Change’ campaign, we are challenging our teens to change that statistic by influencing and encouraging each other to always buckle up. We hope every teen in Virginia will join the campaign and use their creativity to help save lives.”

In addition to buckling up, the campaign will also address speed prevention which remains a key factor in all fatal crashes involving a young driver with approximately half of fatal teen crashes being caused by excessive speed.

As part of the campaign, Virginia students ages 11-20 will be encouraged to participate in the #DriveForChange Sticker Design Contest by designing a sticker/decal with a buckle up and/or slow down message that will influence youth and teens to wear their seat belt and follow posted speed limits. The winning design will be selected by popular vote on social media during National Teen Driver Safety Week (October 18-24) and announced on October 23. Prizes will be awarded for the top five designs with first place receiving $100, having their artwork produced as a sticker for YOVASO’s 2021 Arrive Alive campaign, and will also receive 100 stickers to share with his/her friends. The other four finalists will receive $25. Contest Guidelines can be found online at www.yovaso.org/driveforchange.

Students may also participate in the campaign by registering for a #DriveForChange kit that includes driver and passenger safety resources, project ideas, and other fun items! Additional options for schools, youth groups, and parents to get involved can be explored on YOVASO’s website.

Drive for Change: Buckle Up and Slow Down is funded by a grant from the Virginia Department of Motor Vehicles with additional funding from State Farm, which supports prizes and educational incentives and materials.

“State Farm’s primary goal is to keep drivers safe behind the wheel,” said State Farm spokesperson Kate Beadle. “This campaign is a creative reminder to young drivers to always wear seat belts and obey the speed limit. With these actions, the number of accidents, serious injuries and deaths will be reduced.”

For more information or to register for free campaign materials for your school or youth group, contact Casey Taylor, Program Development Coordinator at 540-739-4392 or visit yovaso.org.

Schools and Youth Groups participating in the 2020 Drive for Change: Buckle Up and Slow Down campaign:

Students are also participating from the following schools and universities:

Just in time for LFCC’s 50th anniversary, the college is launching its first-ever podcast series.

“The podcast gives those who make LFCC such a special place – our students, former students and our faculty – the chance to share their stories in a more in-depth and intimate way than they have ever been able to do before,” says Marketing Director Brandy Boies, who is spearheading the project. “We have had so many amazing people walk through our doors, and this is a great opportunity to share their experiences and successes – and challenges – with a wider audience.”

Janet Michael, an experienced interviewer who hosts The Valley Today on The River 95.3 and owns Java Media, is hosting the podcast for LFCC.

You can find the podcast by searching “LFCC Stories” on Apple Podcast or Spotify, or listen online by clicking on the podcast link at the bottom of the LFCC homepage, lfcc.edu.