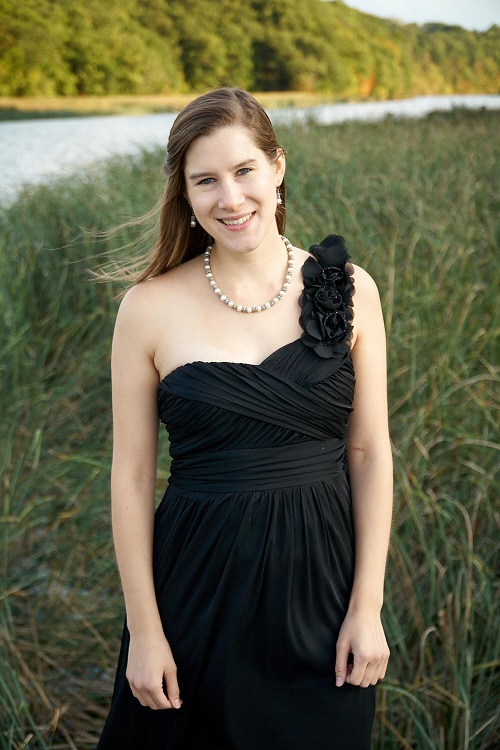 Originally from Greenville, SC, Caroline Robinson is a Doctoral candidate in the studio of David Higgs at the Eastman School of Music in Rochester, NY, where she received the Master of Music in Organ Performance and Literature in 2016. Caroline received the Bachelor of Music from the Curtis Institute of Music, where she studied with Alan Morrison. Aided by a grant from the J. William Fulbright fellowship fund, Caroline studied during the 2013-14 year at the Conservatoire à Rayonnement Régional de Toulouse with Michel Bouvard and Jan Willem Jansen (organ) and Yasuko Bouvard (harpsichord). Formative organ teachers include Adam Pajan, Charles Tompkins (Furman University), Wilma Jensen (Nashville, TN), and Thomas Bara (Interlochen Center for the Arts).

Caroline has performed in many venues across the US and in Europe, including at the Cathedral of St. Philip in Atlanta, St. Thomas Fifth Avenue, St. John the Divine, St. Patrick’s Cathedral, NYC, The Cathedral of St. James, LA, and East Liberty Presbyterian Church, Pittsburgh. Her playing has been broadcast on American Public Media’s “Pipedreams”, “Pipedreams LIVE!”, and Philadelphia-based public radio station 90.1 WRTI’s Wanamaker Organ Hour. She performed at the 2015 AGO Region III Convention and the 2015 and 2016 OHS Conventions, and she looks forward to playing a recital at the 2018 OHS Convention in Rochester, NY.

Caroline is the recipient of the 2016 Peter B. Knock Memorial Music Fund scholarship. She was also included in the Diapason magazine’s Class of 2016 “20 Under 30” leaders in the profession.

Caroline holds the position of Minister of Music at St. Paul’s Lutheran Church in Pittsford (near Rochester), NY. From 2014-2018 she served as Assistant Organist at Third Presbyterian Church in Rochester, under the leadership of Director of Music Peter DuBois. Additionally, Caroline contributes to the mission of the Eastman Rochester Organ Initiative (EROI), helping to coordinate outreach events and scholarly conferences launched by the Initiative.

Caroline enjoys distance running, having completed her first full marathon in Buffalo, NY, in May of 2018. She enjoys vegetarian cooking, traveling, keeping up with current events, and spending time with family and friends.

May is Skin Cancer Awareness Month, and it’s a great time to start or continue good skin health habits to protect yourself against skin cancer. According to the Skin Cancer Foundation, more than 9,500 people are diagnosed with skin cancer every day. This adds up to at least one in five Americans developing cancer by the age of 70.

Skin cancer is the most commonly diagnosed cancer in the U.S. More Americans are diagnosed with skin cancer each year than all other cancers combined.

Prevention
Sun protection is a great and easy way to reduce your risk of developing skin cancer. According to the American Academy of Dermatology (AAD), everyone should take the following steps to protect themselves from the sun’s damaging rays:
– Seek shade when appropriate. The sun’s rays are strongest between 10 a.m. and 2 p.m.
– Wear clothing with built-in sun protection, such as long-sleeved shirts, pants, hats, and sunglasses. Look for clothing with a UPF label.
– Wear broad-spectrum sunscreen of at least SPF 30 or higher, even on cloudy days. Most adults need about an ounce, enough to fill a shot glass. Reapply about every two hours.
– Never use tanning beds.
– Use extra caution near water, snow, and sand.

If you see any suspicious spots, talk to your doctor right away. See a dermatologist regularly for preventative skin checks.

The crisp white flesh and peppery taste of radishes make them a great addition to salads and sandwiches. Plus, the leaves of this root vegetable can be used as a leafy green much like lettuce and spinach. Although they can be found year-round, red radishes are generally ready to be harvested in the spring.

Health benefits
Radishes pack a punch with their distinct taste, but they’re also loaded with nutrients. In particular, radishes are a good source of vitamin C and other antioxidants that protect your cells from damage. They’re also rich in minerals like calcium and potassium, which help lower blood pressure and reduce your risk of heart disease. Other compounds in radishes can help prevent diabetes. Plus, this vegetable is low in calories and a natural appetite suppressant.

Selecting and storing
For maximum taste, choose radishes that are about the size of ping pong balls. Make sure they’re firm with a smooth, vibrant red exterior. If you buy radishes in bunches, the leaves should be stiff and bright green.

Radishes can be stored for about a week in a perforated plastic bag. Place them in the crisper drawer of the fridge to help prevent them from drying out.

To stock up on these tasty vegetables, visit your local farmer’s market.

Do you want to freshen up your yard or completely redesign the look of your property? If so, here are five advantages to working with a team of lawn care and landscaping professionals.

1. Your plants and trees will thrive. While all species require sunlight to grow, some need much more of it than others. Plus, certain plants prefer direct light, while others do well in the shade. A landscaper will ensure each plant is in an ideal location to get what it needs.

2. Your planting times will be perfect. Some species need to be planted at a specific time of the year to grow and survive the change of seasons. Leaving this work to a professional will ensure you don’t make any mistakes.

3. Your landscaping will be cohesive. The style of your home, the size of your property, and the layout of your driveway and yard can affect the look of your landscaping. A specialist will take these elements into account before proposing a beautiful and practical design for your front and backyard.

4. Your lawn will be expertly installed. If you want to lay sod, the ground must first be properly prepared using specialized equipment. A landscaper will have the right tools and experience to quickly and efficiently complete this task. If you already have a lawn, a professional will make sure it stays lush, healthy, and free of pests.

5. Your hardscape will be stronger. Walkways, stairs, walls, and patios can be installed using a variety of materials. A landscaper will consider factors such as the frequency of use and weather conditions when designing every detail.

If you want to boost your home’s curb appeal and wow your guests, be sure to hire a team of landscaping professionals this spring.

How to drop out of a hiring process

Are you being considered for a job that you now realize isn’t a good fit? Here are three tips to help you withdraw your candidacy without damaging your reputation.

1. Do it as soon as possible
After going through the interview process, you may realize that the position or company isn’t what you thought. You can take a few days to decide, but it’s best to let the recruiter know sooner rather than later to avoid wasting their time.

2. Confirm it in writing
You may want to announce your withdrawal over the phone if that’s been your primary means of communication with the recruiter. However, you should always follow up in writing. A simple email thanking the recruiter for their time and consideration will help keep the door open for future opportunities.

3. Provide a brief explanation
Avoid getting bogged down in the details about your decision to withdraw. If you’ve accepted a job elsewhere, you can mention it but don’t specify the company or position. If you don’t like the company culture, simply state that you don’t feel the position is a good fit for you at this time. If you’re not satisfied with the proposed salary or benefits, reaffirm your interest in the company before specifying your reason for the refusal.

By following these tips, you should be able to drop out of the hiring process without burning any bridges. This is particularly important if you want to apply for another position with the company at a later date.

What to include in an emergency kit for your car

If a natural disaster strikes, having an emergency preparedness kit in your car could help keep you safe. This year for National Hurricane Preparedness Week, which takes place from May 9 to 15, consider keeping essential emergency supplies in your trunk. Though you may wish to customize your kit further, these are the items you should make sure to include:

Additionally, you should keep these items in your trunk:
• Sand, salt, or cat litter
• Antifreeze and windshield washer fluid
• A small shovel, scraper, and snow brush
• A tow-rope
• Jumper cables
• A fire extinguisher
• Warning lights or road flares

Remember to restock or replace any expired items in your emergency car kit every six months.

Lastly, it’s a good idea to keep some extra cash in your kit. This way, you’ll be able to buy last-minute essentials if the power goes out and the ATMs and banks aren’t operating.

Do you dream of having a healthy green lawn and gardens filled with bright blooms? If so, follow these tried and tested tips.

1. Consider plant placement
Make sure each plant is in a spot where it’ll get the sunlight and nutrients it needs to thrive. Additionally, think about how the plant will look in terms of its appearance and size.

2. Water at the right time
On hot days, water your plants early in the morning or late in the evening. This way the roots will have time to absorb the moisture before it evaporates.

3. Fertilize as needed
Test the soil, then select a fertilizer or soil amendment that’ll provide the right balance of nutrients for your grass and plants to thrive. Avoid nitrogen-rich fertilizers after mid-July.

4. Apply mulch
Cover the ground with a generous layer of mulch to enrich the soil, improve drainage and suppress weeds.

5. Attract pollinators
Opt for nectar-rich plants and choose species with varied bloom times, so your garden will flower from spring until fall.

6. Avoid pesticides
Cultivate your garden without using pesticides by creating a diversified habitat and choosing insect and disease-resistant plants, among other things.

8. Collect rainwater
Set up a few rain barrels on your property to conserve water. This will ensure you can continue to water your garden in times of drought.

Meet at the Carriage Barn in Historic Area. Connect with the park’s landscape and get a taste of the skills you need to thrive in the backcountry. Participants will join experienced outdoor skills instructor Tim[...]
View Calendar