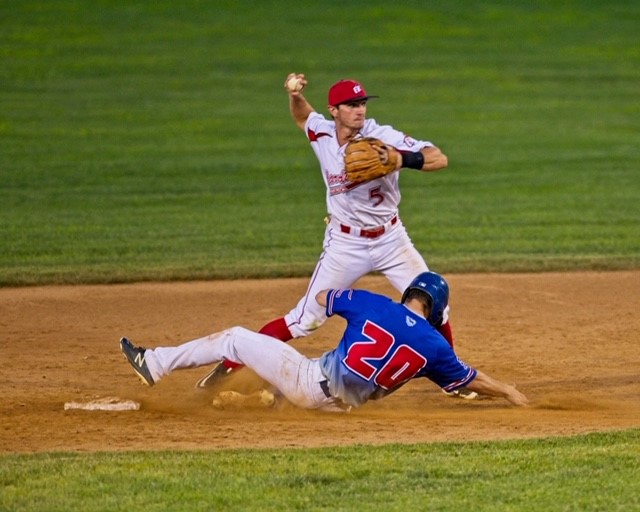 In a close game that saw plenty of action at Bing Crosby Stadium, the Cardinals lost a hard fought game to the Staunton Braves. The evening opened with the Virginia Police Benevolent Association Twins Little League Team joining the Cards on the field for the National Anthem – a heartwarming way to start the evening.

When game action began, the first innings kept Cardinals fans on the edge of their seat. Each team successfully worked out of jams to keep the game scoreless. The first score came in the fourth inning, when Staunton was able to push two across to take a 2-0 lead. The Cardinals threatened in the home half of the fourth, when Steve Grober and Dylan Manhennett reached base, but they weren’t able to complete the trip around the bases to even the score. Staunton’s winning pitcher, Lliam Grubbs, started strong, striking out seven batters in four and two thirds innings, but Cardinals’ Trey Fields changed the tide in the fifth inning when he connected with a bases loaded double to score Jose Hernandez and Arrison Perez, and tied the game at 2 each.

Staunton broke things open again in the sixth inning, managing to plate four more runs, while the Cardinals were only able to get back two in their half of the inning. Those runs would be the last scored by the Braves for the night, as Cardinals’ relief pitchers Trey Parr and Brent McMillion were able to hold them for the rest of the game. The Redbirds rallied again in the eighth, when Perez’s single scored Derek Orndorff to bring the Cardinals within one run; however the Braves bullpen was able to keep the Birds off the bags in the 9th, ending their chances for the first home win.

When the dust settled, Coach Tony Hurla said, “The guys really dug deep tonight after getting behind early. I’m proud of the effort we played with. A few defensive miscues cost us and we didn’t get any breaks on some close calls.” Overall, Cardinals’ Arrison Perez led the offensive change tonight, going 2-3 at the plate, followed by Grober (2-4) and Menhennett (2-5). Each of the Redbird pitchers had two strikeouts in tonight’s game.

On June 7th, the Woodstock River Bandits host your Front Royal Cardinals at Central High School. Game time is 7:00 pm. The next opportunity for the Cardinals to get their first home win will be against theon Saturday, June 8th, at Bing Crosby Stadium.