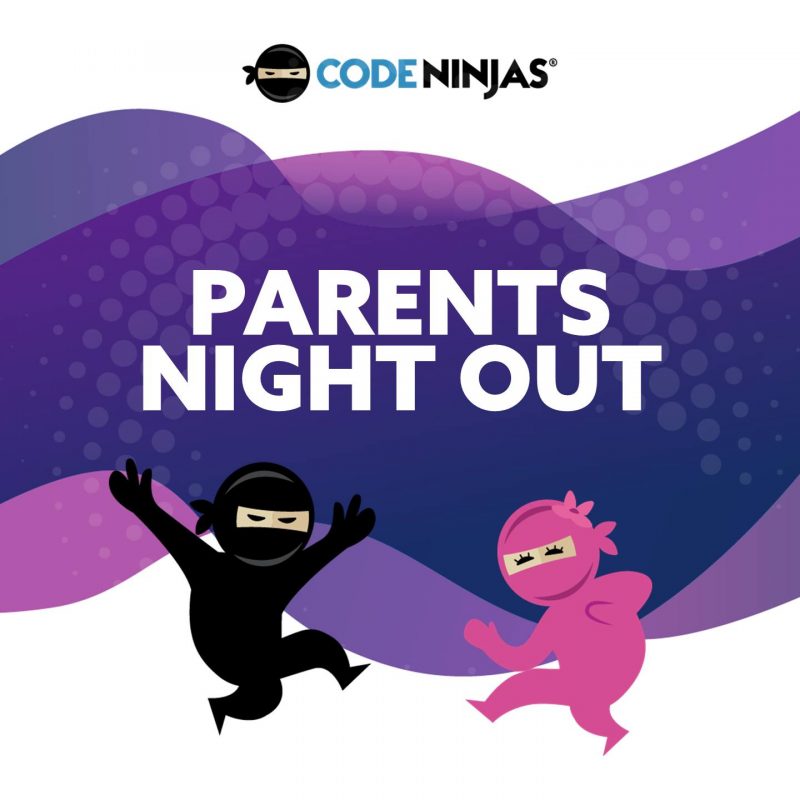 You deserve a night on the town. Meanwhile, your kids want to play and have fun. That’s why we offer Parent’s Night Out – a win-win evening for families.

Drop off your kids at Code Ninjas, where they’ll play games, assemble puzzles, build robotics, and more. Once you’ve had a chance to unwind, swing by to pick them up (please) and hear about all the fun they’ve had!

Kondwani “KG” Rogers, 29, of Winchester, Virginia and formerly of Front Royal, Virginia passed away unexpectedly on Saturday, May 8, 2021, in Frederick County, Virginia.

A Home Going service will be held on Thursday, May 20 at 2:00 p.m. at Maddox Funeral with Sammy Campbell officiating. Interment will be private.

KG was born March 8, 1992, in Front Royal son of James M. Jones, Sr. of Dover Delaware, and Cassandra N. Dudley of Charlottesville. He worked for Thompson’s Food Truck alongside his grandfather, Isaac Thompson, who helped in his upbringing. He will be greatly missed by his family and many friends.

He was preceded in death by a sister, Jessica Jones.

It is with the deepest sorrow that we announce Daniel Andrew Currence, 20, of Front Royal, Virginia, our beloved son, brother, grandson, nephew, and cousin passed away on Saturday May 15, 2021.

Daniel will be missed every day by his parents, Mark and Carrie Currence; brother Thomas Currence; Grandparents Dennis and Nancy Donak of Luray, and Charles and Jo Ann Currence of Winchester; and Aunt Michelle Morrison of Winchester.

Those who knew Daniel have lost such a kind and generous soul. He was an avid welder who learned quickly, gaining several certificates towards his passion for welding through high school and Lord Fairfax Community College. In his free time, he loved to detail cars. He dreamed of restoring the Camaro of his uncle, Richard Donak who preceded him in death. He also hoped to someday build a log home. Daniel had great dreams and aspirations, and he will be missed by many.

Daniel is loved on earth as well as in heaven. You are welcome to join us as we celebrate his life at Maddox Funeral Home in Front Royal on Saturday, May 22, 2021, at 1:00 pm. Burial will follow in Luray at Mt. Zion Church of the Brethern Cemetery 1177 Mt. Zion Road, Luray, Virginia 22835.

The 29th District House of Delegates Nominating Committee will hold an assembled caucus on June 10, 2021, from 5:00-6:00 pm at the Rotary Shelter in Jim Barnett Park, Winchester, VA for the purpose of selecting the Democratic Candidate for the 29th District Democrat Candidate.

Candidates who seek the nomination as the 29th District Democrat Candidate must file the ELECT-511 with The 29th District House of Delegates Nominating Committee postmarked not later than 5 pm June 8, 2021, at H29 Delegate Selection, P.O. Box 2215, Winchester, VA 22604.

Filing forms may be found at the State Board of Elections website at https://www.elections.virginia.gov.

This event WILL BE CANCELLED if the candidacies are uncontested (by close of business June 8th). More information here.

On May 18, 2021, U.S. Senator Mark R. Warner (D-VA) along with Sens. Roger Wicker (R-MS), Ben Cardin (D-MD), Shelley Capito (R-WV), Kyrsten Sinema (D-AZ), John Boozman (R-AR), John Hoeven (R-ND), and Cindy Hyde-Smith (R-MS) reintroduced legislation to encourage greater private investment in rural and underserved areas, which have been particularly hard-hit by the COVID-19 health and economic crisis. Seeking to build on the proven success of the New Markets Tax Credit (NTMC) program, the bipartisan Rural Jobs Act would increase the flow of capital to rural areas and will serve as an important tool in U.S. economic recovery efforts. Companion legislation has also been introduced in the House of Representatives by Reps. Terri Sewell (D-AL) and Jason Smith (R-MO).

“The New Market Tax Credit program has a proven track record of reviving local economies and creating needed jobs in communities around the country. Unfortunately, less than one in four jobs created by this program have been in rural communities,” said Sen. Warner. “This legislation will bridge this job creation gap by earmarking additional tax credits specifically for rural and underserved regions, which are suffering tremendously due to the health and economic impacts of the COVID-19 crisis.”

Since the creation of the NMTC, a total of 77 businesses and economic revitalization projects in Virginia have received financing, contributing to $1.5 billion in total project investments.

“Senator Warner’s bill, the Rural Jobs Act, will create a powerful new tool for economic and community development in rural communities across Virginia and across the nation, it will lead to more quality jobs and better futures in rural America,” said Rob Goldsmith, President, and CEO, People Incorporated Financial Services.

Under this legislation, Virginia would have more qualified census tracts than almost any other state, providing greater investment opportunities to support and grow businesses and create jobs in communities across the Commonwealth. The bill would also require that at least 25 percent of this new investment activity be targeted to persistent poverty counties and high-migration counties. There are approximately 400 persistent poverty counties in the United States, 85 percent of which are located in non-metro or rural areas.

A bill summary is available here.

While Virginia ranks sixth in the nation for the timely payment of benefits to eligible applicants, the Governor’s action will speed up the resolution of cases flagged as potentially fraudulent or ineligible. These cases represent approximately four percent of all claims.

“Virginia is a national leader in getting unemployment benefits to eligible individuals, but it’s clear that complex cases must be resolved more quickly,” said Governor Northam. “That’s why I’m directing the Virginia Employment Commission to invest $20 million to significantly speed up its adjudication process and immediately implement long-overdue technology upgrades. This action will address many of the issues that have caused delays and ensure that we continue to deliver relief to Virginians who need it.”

Virginia’s unemployment system was set up to benefit businesses, not workers, and it has remained one of the lowest funded systems in the country for generations. In fact, Virginia ranks 51st out of 53 states and territories for the amount of federal funding it receives relative to what Virginia businesses pay in taxes. The problem was hidden by years of low unemployment and a consistently strong economy, and the pandemic has highlighted this reality.

If an individual’s initial claim is flagged for potential ineligibility or fraud, federal law requires the Virginia Employment Commission (VEC) to adjudicate the claim before proceeding with payment. Most individuals that are placed in the adjudication process are ultimately found ineligible for benefits.

• Set a clear goal for resolving UI claims. Governor Northam has directed VEC to increase the number of adjudications being processed per week from 5,700 to 10,000 by June 30 and to 20,000 by July 31, 2021. This will be accomplished, in part, by finalizing a $5 million contract for over 300 additional adjudication officers. VEC is also coordinating with the Virginia Department of Human Resource Management (DHRM) to identify employees across Virginia’s state agencies who can temporarily support VEC.

• Continue investment in Customer Contact Center. Since the onset of the pandemic, VEC has quadrupled its customer service capacity in order to provide information and support to Virginians with questions about their claims. Governor Northam has directed VEC to expedite an additional contract for services and staff to augment the current expansion.

• Modernize the benefits system. Historic claim volume during the pandemic had previously delayed VEC’s progress in modernizing its 41-year-old benefits system. The agency has resumed the project, executing a contract for $5 million in state funding for technology upgrades. October 1, 2021, has been set as the target date for completing the final phase of the system. VEC will be implementing additional technology upgrades for customer service in the coming weeks to increase capacity.

• Collaborate with the Virginia congressional delegation to resolve federal funding disparity. States receive unemployment support from the federal government. The amount is based on how much Virginia businesses pay in federal unemployment insurance taxes. For Virginia, that ratio is among the lowest of all states and an increase typically requires businesses to pay more in taxes. This formula has underfunded Virginia’s UI system for years with respect to upgrading technology and maintaining staffing levels.

“As Virginia’s chief workforce official, I am always thinking about the Virginians behind the unemployment numbers,” said Chief Workforce Development Advisor Megan Healy. “As we move into the next phase of our recovery, the Governor’s actions will create additional capacity for processing the historic number of claims with indeterminate eligibility.”

Virginia has made a wide range of additional assistance available to those whose employment has been impacted by COVID-19. Low-income Virginians should refer to the Virginia Department of Social Services CommonHelp for guidance on applying for food, cash, childcare, and other assistance. Support is also available through the Virginia Career Works Referral Portal for those interested in workforce training, going back to school, or getting a job. This includes $36 million in funding through Governor Northam’s ‘Get Skilled, Get a Job, Give Back’ (G3) Program, which makes tuition-free community college available to low- and middle-income students who pursue jobs in high-demand fields.

“Starting the pandemic with low federal support and record low UI claims, the VEC has faced a greater than 1000% increase in workloads,” said Commissioner Ellen Marie Hess. “I am proud of the work our team has done and continues to do in the face of truly unprecedented demand. Weekly claims still exceed pre-pandemic levels, but each and every day, the dedicated public servants of the VEC continue marching forward and serving their fellow Virginians.”

The full text of Executive Directive Sixteen is available here.