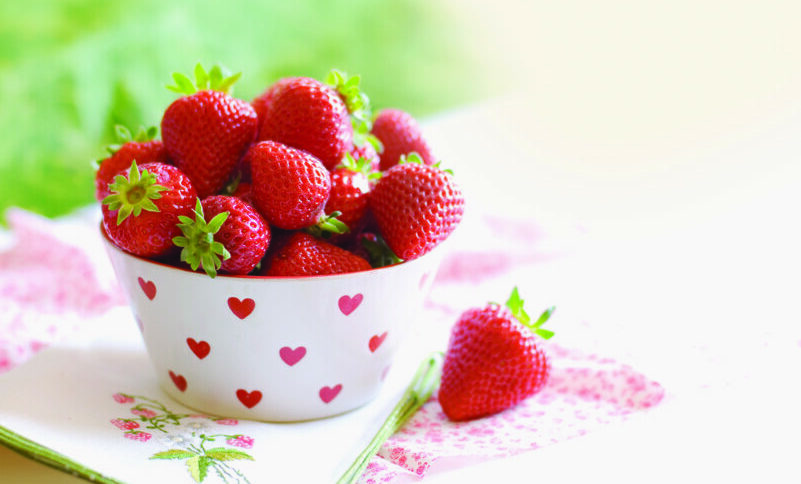 Did you know that botanically speaking, strawberries aren’t really berries at all? In fact, because they’re derived from a single flower with more than one ovary, they’re classified as aggregate fruits. Here are some other things you might not know about strawberries.

• They’re part of the rose family. Strawberries are members of the Rosaceae plant family. Just like roses, strawberries are perennials. However, they’ll only bear fruit for about three years.

• They’re packed with health benefits. Besides their high levels of vitamins and antioxidants, strawberries contain an abundance of healthy nitrates, which have been shown to increase oxygen and blood flow to the muscles.

• They were cultivated for medicinal purposes. Ancient Romans are thought to have used strawberries to treat everything from melancholy to inflammation and throat infections.

• They were once used for bathing. Madame Tallien, a prominent member of Napoleon Bonaparte’s court, was famous for bathing in the juice of strawberries. It took 22 pounds of the fruit to fill her basin.

• They’re one of America’s most loved fruits. On average, people in the U.S. eat three-and-a-half pounds of fresh strawberries a year.

Of course, the most fabulous thing of all about strawberries is eating them. Whether fresh, baked or preserved, be sure to get your fill this summer.

Say hello to a new family favorite. This classic dish with a twist is so tasty, you may want a second serving.

Directions
1. Preheat the oven to 350 °F.
2. Cook sweet potatoes in boiling water until tender. Drain the water, add the milk and butter and mash until smooth. Salt and pepper to taste and set aside.
3. Heat the oil in a large pan, and sauté the onion, garlic, carrot, celery and mushrooms for about five minutes or until soft. Add the lentils and thyme. Mix well and transfer to an 8 x 11 inch baking dish. Cover with the sweet potato puree.
4. Cook for about 30 minutes and serve.

You can make individual portions by building the shepherd’s pie in several ramekins.

This hearty corn chowder is the perfect meal for a cold, wintery night. Indeed, it’s a recipe you’re sure to come back to again and again.

Directions
1. In a large pot, cook the bacon. When it’s almost done, add the leek. Continue to cook until the bacon is crispy and the leek is translucent. Drain the bacon grease.
2. Add the potato, corn, broth, milk, cream, rosemary and bay leaf and bring to a boil. Reduce the heat and simmer for 25 minutes or until the potato is soft.
3. Salt and pepper to taste.
4. Garnish with the chives, then serve and enjoy.

There’s nothing better than a meal made in the slow cooker, especially when it’s this chili con carne.

Directions
1. In a large pan over high heat, warm 1 tablespoon of the olive oil and brown the beef in it. Transfer the meat to the slow cooker.
2. In the same pan, heat the remaining olive oil and cook the onion, celery and carrot. When it’s almost done, add the garlic, chili seasoning, cumin and dried oregano. Cook for 2 or 3 minutes or until fragrant.
3. Add the ketchup, diced tomatoes, beans, red pepper, brown sugar and beef broth and cook until hot. Salt and pepper to taste.
4. Pour over the beef in the slow cooker and cook on low for 8 hours or on high for 4 hours.
5. Taste and adjust the flavor by adding more chili seasoning, salt and pepper, if necessary.
6. Serve topped with a dollop of sour cream and some of the sliced green onion.

If you want fried chicken that’s crispy on the outside and perfectly cooked on the inside, then try this recipe. You won’t regret it!

Directions
1. Cut the chicken into 8 pieces (2 breasts, 2 thighs, 2 drumsticks and 2 wings).
2. In a large bowl, combine the milk and lemon juice to make buttermilk. Let sit for about 10 minutes.
3. Add a teaspoon of each herb and spice to the buttermilk mixture and stir to combine. Put the chicken into the milk to marinate and refrigerate overnight or for at least 4 hours.
4. After marinating, put the flour into a bowl and add one teaspoon of each herb and spice. Mix well to combine.
5. Remove the chicken from the buttermilk marinade and coat it completely in the flour mixture. Let rest for a few minutes.
6. Heat the oil in a large, deep pot until it reaches 400 °F.
7. Carefully put 2 pieces of chicken in the oil, and fry until they reach an interior temperature of 165 °F. Repeat until the entire chicken in cooked.
8. Drain on a piece of paper towel and serve with your choice of sauce.

This decadent dish is easy to prepare. Serve it as an appetizer or as a crowd-pleasing dessert. Either way, it’s sure to be a winner.

Directions
1. Preheat the oven to 400 °F.
2. Cut the brie in half horizontally, thereby creating 2 round slices.
3. Spread the pear jam on the inside of one section of the wheel and cover with the other half, thereby reassembling the entire wheel of cheese with the pear jam in the middle.
4. Place the wheel on a baking sheet covered with parchment paper.
5. Using a knife, score the top of the cheese to create a checkered pattern.
6. Top with walnuts, honey and rosemary and bake for 10 minutes or until the cheese is just starting to melt.
7. Serve with slices of baguette.

Spicy chicken and sweet potato stew warms up everyone

Ahhh, stew. It’s a comfort food in the harsh winter, not only in its makeup but in its usefulness: we can stand over a steaming bowl and feel warmth on our face. Plus, it’s a great way to use up that stray potato left over from the holidays.

Stews start with a base of liquid, meat cut into cubes, and typically some type of root vegetables. Categories typically include brown stews, in which the meat is browned in fat before the liquid is added, and white stews, in which it is not.

Although stews are generally considered a pedestrian dish, there are some, like beef burgundy, that are fine dining-approved. And every culture seems to have its twist, according to Encyclopedia.com: from Argentinians who add fruit and bake them in a pumpkin or squash shell, to bigos, also known as hunter’s stew, considered Poland’s national dish.

Here is a recipe for spicy chicken and sweet potato stew from the website Allrecipes. It’s easy, hearty, and, like the appeal of most stews, it’s a one-pot meal.

Heat olive oil in a large pot over medium heat. Stir in onion and garlic; cook and stir until the onion has softened and turned translucent, about 5 minutes. Stir in sweet potato, bell pepper, chicken, tomatoes, and 2 cups of water. Season with salt, chili powder, cumin, oregano, cocoa powder, cinnamon, and red pepper flakes. Increase heat to medium-high and bring to a boil.

Dissolve flour in 2 tablespoons water, and stir in to boiling stew. Reduce heat to medium-low, cover, and simmer until the potatoes are tender but not mushy, 10 to 20 minutes. Stir the stew occasionally to keep it from sticking.

Once the potatoes are done, stir in corn and kidney beans. Cook a few minutes until hot, then stir in cilantro before serving.

Statistics show us that one in four children will experience trauma by the age of four. This trauma could be abuse, hunger, homelessness, witnessing violence, medical trauma, or grief. We know that a child’s greatest[...]
View Calendar