Watch this interview with Gary Auerbach with Steve Vaughn, Treasurer for the Kernstown Battlefield Association. The Anniversary of the 2nd Battle is Monday July 24 and activities/events can be found at kernstownbattle.org.

In July 1864 the main focus of the war in Virginia had shifted to the Richmond area where the Union army had hopes of swiftly ending the war. Only secondary attention was being paid to the Shenandoah Valley with the only Union presence being Gen. George Crook in Winchester with a force of less than 12,000. With the tragic loss in 1863 of Gen. “Stonewall” Jackson who died at Chancellorsville from friendly fire from his own pickets, the Confederate forces in the Valley were now led by Lt. Gen. Jubal A. Early.

Having learned of a severely diminished Union presence in the Valley, on July 24th Gen. Early pushed north from Strasburg toward Winchester with nearly 17,000 troops. His intent was to push Gen. Crook’s force out of the city and out of the Valley. Crook, believing that only a small cavalry force faced him, ordered his units to push south from Winchester and scatter the Confederates.

Once again, Union artillery graced the heights of Pritchard’s Hill to support the Union advance. Crook’s regiments made it as far as the Opequon Church just south of Pritchard’s farm in Kernstown before being forced back by Gen. Early’s amassed force. As they pulled back, fierce fighting tore at the Union ranks lined up behind the stone wall along the entrance lane to the Pritchard farm. Union Col. James Mulligan tried to rally his troops behind the wall but they were heavily outflanked by the crack troops of Gen. Breckenridge pouring in from the east, Gen. Ramseur advancing from the west and Gen. Gordon coming directly from the south.

During his stand behind the stone wall, Col. Mulligan was mortally wounded by Confederate sharpshooters. As his troops attempted to carry him from the field, sensing defeat and his own mortality, he admonished them to “Lay me down and save the flag”. Thus began the retreat of the Union force north into Maryland and on to Pennsylvania.

When the field of battle again became calm, Col. Mulligan was carried into the Pritchard house immediately behind the battle line. There he was nursed and cared for by the Pritchards but his wounds were severe and he died three days later. Some years afterward, Samuel Pritchard remembered of Mulligan “He died in my arms. I was holding his head up at the time he died.”

The Second Battle of Kernstown was a decisive Confederate victory, but it was to be the last such in the Valley. Gen. Jubal Early’s victorious Confederates inflicted 1185 casualties in smashing Gen. George Crook’s Army of West Virginia, clearing the Valley again of Union troops, and opening the way for Early’s route into Pennsylvania. In Washington, President Lincoln moved to put the entire Valley area under the command of Gen. Philip Sheridan. The battles of Third Winchester, Cedar Creek, and the Great Burning of the Shenandoah Valley were to follow.

In essence, the Second Battle of Kernstown marked the beginning of Sheridan’s Valley Campaign of 1864 effectively destroying the breadbasket of the Confederacy tilting the balance of power in the Valley in favor of the Union. The Shenandoah Valley…its families, its farms, its livelihood…was left in ruins.

In 1862, Stonewall Jackson had said “If this Valley is lost, this war is lost.” Nine months after Early’s victory at Kernstown the war ended at Appomatox. 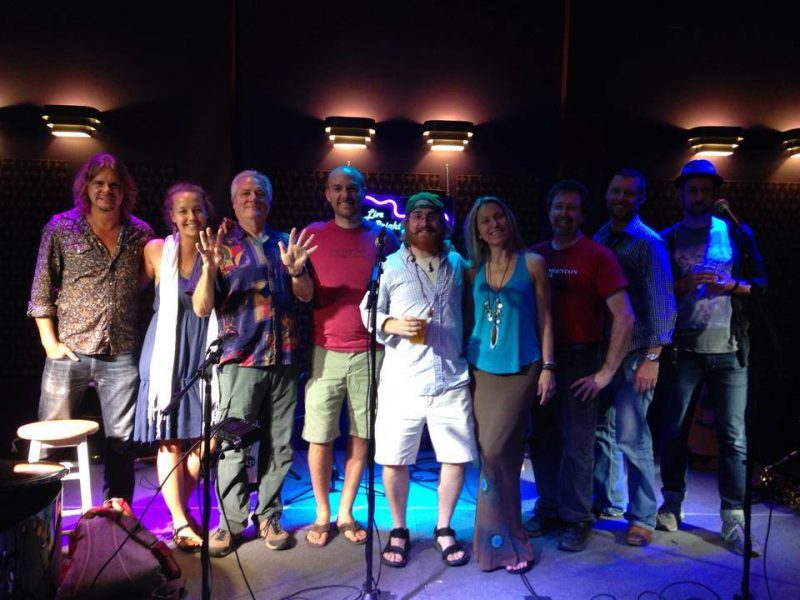 Wow! The Shenandoah Valley has some amazing music talent to recognize and appreciate. A fabulous collection of singer/songwriters performed on Saturday (November 11) night at Bright Box – Out of the Box in Winchester, VA.  The show was originally created by Justin Trawick in 2008. Nine singer/songwriters rotate during the show with the goal of providing the audience with rich, varied entertainment.

This Winchester show was hosted by Emma Rowley. The evening featured music by: Matt Chellini, Alex Taughinbaugh, Joe Martin (from Slow Creek), Rich Follett, Emma Rowley, Erik Burnham (from the Plank Stompers), Sally Mae Foster, Blue Ajay and Cassi Raye. Together these folks were, “THE 9.” It was truly a delightful show of all sorts of music, happy, introspective, funny and instrumental.  Be sure to like their page to follow where the next show might be! fb.me/wearethe9

A special treat to see Rich Follett take the stage. Rich is a local to Front Royal and much loved for his acting, writing, poetry, music, education and overall support of the arts here in the Shenandoah Valley. Always a crowd favorite bringing both a tear and a smile with his words and sweet sound. To see Rich in person for yourself, come out on November 18th to Open Mic with A Cause held at Open House on Main Street in Front Royal (213 E Main Street) at 7pm. This open mic is a fundraiser for ROTH of FR helping homeless people in Warren County.

Exciting news was mentioned during the evening that several of the artists have recently been signed to Bird Dog Records in Wincester, VA (www.birddogrecords.net). Rich Follett and another Front Royal favorite, Sally Mae Foster are two who have signed and will be recording with Bird Dog Records.

Watch this video for a sampling of WE ARE THE 9. SINGER. SONGWRITER SERIES from November 11th in Winchester, VA at Bright Box – Out of the Box. http://www.brightboxwinchester.com

White House Foods is a family owned company located in Winchester, VA. They have been processing apples and making quality apple products Since 1908. With a strong heritage and generations of traditions they take pride in expanding their orchards for the next generations.

Contact Gary at: gary@frisbeeguy.com
ABOUT GARY: They call me Mr.Frisbee or the Frisbee Guy

For those of you who don’t know the whole story here it is in a nutshell:

In 19+ years I’ve probably seen close to half a million kids, parents, coaches! My goal is to show people that learning to have fun with a frisbee, in the form of simple tricks that everyone can do, will make them want to become lifelong frisbee players…like me!

While I’ve also played at four world club championships in Ultimate and play Disc Golf regularly I know from years of experience that tricks are what really captivates the hearts and minds of kids of all ages.

For nearly 20 years I’ve been showing people what they can do with frisbees and, to me, that is the single most important part of my shows. By letting them discover and imagine what is possible they may also become lifelong frisbee players.

Audiences are forever amazed, enriched and inspired by my frisbee presentation, as well as educated and entertained, and always at an age appropriate level.

Burwell-Morgan Mill Tour with Nathan Stalvey, Director. Founded in 1939, the Clarke County Historical Association is a 501 c 3 non-profit dedicated to preserving the history of Clarke County. Offices are located in the historic Coiner House at 32 East Main Street in Berryville, Virginia.