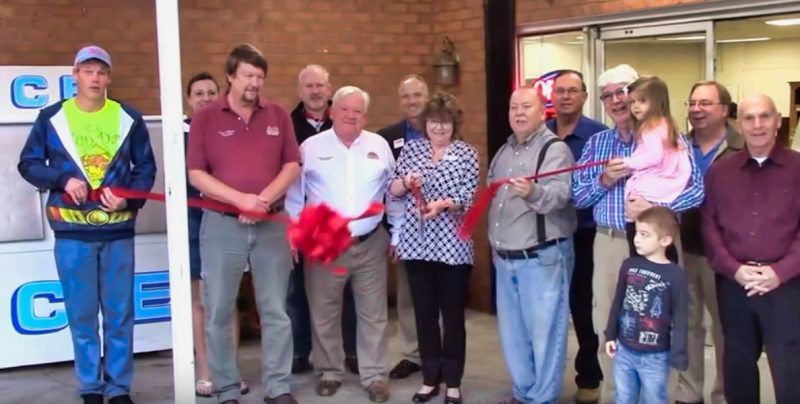 The Front Royal/Warren County Chamber of Commerce has welcomed another new business to our community.

The Main Street Market is located at 506 E. Main Street, which is on the corner of Water and Main Street where the former Stokes Mart was located.

Ginny Leser says the Main Street Market will be a neighborhood grocery store specializing in local Virginia-grown produce, as well as meats, jams, and chutney. Soon to come, she says, will be Virginia wines and craft beer. Also located inside are Down Home Comfort Bakery items, a coffee station, and Virginia handcrafted gifts and artwork. Artisans are invited to contact them as well.
On Saturday, the Main Street Market will have local musicians and food items for sales. Ginny invites everyone to come down and have lunch and enjoy the music.
Share the News:

Robert Tennett, Jr. is ready to serve on Town Council

In addition to the “From the Heart” weekend downtown Front Royal entertainment mentioned in a related story on music, haircutting and styling, this past weekend saw other downtown events and entertainment.

Those events, among others we may have missed from simply not knowing about them until after the fact, included the Mark Clay-led Vinyl Tracks band entertaining with its repertoire of classic vinyl-era music at a Thursday evening Gazebo Gathering;

Vinyl Tracks gathers fans at the Gazebo, early Thursday evening. Below, haven’t we seen that father-daughter/drummer-singer team on stage with their own band somewhere before? – Hint, it was ‘Aftershock-ing’. Royal Examiner Photos/Roger Bianchini

Beautiful over and under the hood

Pals Rico, left, and Diva at outdoor portion of Friday’s ‘Yappy Hour’ at ViNoVa – Below, ‘Could we have some more water in our bowls, please’ these 2 hot dogs may have been thinking; and water they got under the tent shade.

and the band Starting Early tracing rock history through the 1960’s-‘70’s beginning with a properly suited Beatles set, followed by some classic power trio (Hendrix, Cream) and quartet (Zeppelin) music, among others, followed by some originals in the Virginia Beer Museum back-of-house outdoor Biergarten.

It was too late to be Starting Early by the time the band got to its 1960’s-‘70’s power trio and quartet sets in the Va. Beer Museum Biergarten.

Enjoy these images from those events, and come on downtown for the next installment of Front Royal re-opened, masks and social distancing encouraged, as Warren County and all of Virginia walk the tightrope between pandemic precautions and COVID-19 spikes and economic rebounding this unprecedented summer of 2020.

From the Heart helps Front Royal celebrate a measured return to business – But can I schedule a haircut and shave after the band is done?

Unless booked elsewhere, From the Heart plays something for everyone from around 5 p.m. to 9 p.m. Fridays and Saturdays in Front Royal’s reopened downtown commercial center. Royal Examiner Photos/Roger Bianchini

It may not be your traditional “Barbershop Quartet”, but to celebrate Virginia’s measured walk-back of COVID-19 Coronavirus pandemic emergency management restrictions, punctuated by the Town of Front Royal’s weekend downtown business district street closings facilitating a walking mall ambience to draw residents and tourists back out into the properly social distanced commercial world, “Mr. John’s Barbershop” proprietor John Landes has brought his band From the Heart into play – literally.

As of June 27, according to the band Facebook page, From the Heart has set up in front of Landes’s Chester Street barbershop on Friday and Saturday evenings from approximately 5 p.m. to 9 p.m. to bring their mix of classic country, rock and popular music to Front Royal’s re-opened Historic Downtown Business District.

Yes, the barbershop is closed – the barber is doubling up fronting his band on Friday and Saturday evenings outside his 8 Chester St. business location. Below, May Landes steps in on vocals.

From the Heart gets fans dancing and smiling with material spanning decades and genres – you’re liable to hear favorites from Charlie Daniels to Rod Stewart among others on your personal top of the charts list.

And while you can’t get a haircut while the band is on – it’s hard to sing, play and snip those overgrown locks at the same time – a small contribution to the band’s tip jar might just get you to the front of the line for the barbershop’s next day of business.

From the Heart is, in addition to Landes on guitar, harmonica and vocals, his wife May on guest vocals; Kenny Smith on banjo, guitar and vocals; ‘Bubba’ Ward on rhythm guitar; and Marty Jacobs on percussion.

Downtown visitors Damian and Linda the well-groomed dog, stop for a photo op. Good girl, Linda – don’t look at the band, look at the camera. Linda, are you sure you haven’t been two-timing Mr. John’s at the New Creations Hair Salon next door?

The Humane Society of Warren County is poised for the biggest yard sale in their history this Friday and Saturday, July 17 and 18. Thanks to a huge outpouring of support from the local community, the donations for this year’s annual yard sale far outnumber any previous year’s donations.

The HSWC Annual Yard Sale has been an important source of funding for the shelter since it began in 2013, typically bringing in $2,000-$4,000. This year, due to the enormous amount of donations, the goal fundraising goal for the shelter is $5,000.

Because the shelter is open by appointment only, there will be a portable toilet and portable hand-washing station available, and social distancing will be required. Shopping will be 10am until 2pm on both Friday and Saturday.

Local non-profit groups have been invited out on Saturday to take anything that will benefit their cause at no charge.

Since it’s beginning, the yard sale has operated using a “name your price” format, which means that there are amazing deals to be found. Highlights for this year’s sale include two sets of golf clubs, a swing set, a leather sectional couch, new with tags clothes and shoes, and kitchenware.

“I hope people come out to shop, there are so many great items, and every dollar spent is used for our life-saving work” says Meghan Bowers, Executive Director at the shelter. “This is one of my favorite events, and I am really looking forward to it.”

Randolph-Macon Academy Assistant Dean of Students Derrick E. Leasure officially took over as president of the Rotary Club of Front Royal at an “actual” ceremony in the town’s community center on Friday, July 10.

Outgoing president Bret Hrbek passed the gavel after his year in office, made more challenging when interrupted by the COVID-19 Coronavirus pandemic, which sent its regular weekly meetings since March to the internet via “Zoom.”

The real-life meeting that greeted Leasure, attended by a dozen past presidents from John Marlow (1977) to the retiring Hrbek, likely will return to “Zoom” as Leasure begins his tenure. After the gavel was passed, Leasure swore in members of the new board of directors, including Hrbek.

“He has a difficult task before him,” Hrbek had said earlier. Like other local organizations, Rotary has taken a hit in its fundraising activities but nevertheless managed to take in $126,000 last year for local and international projects.

Leasure, who came to R-MA’s middle school in 2008, earned his Bachelor’s Degree at Ohio State University and a Master’s in History from the University of Arizona. He is an active member of the Front Royal/Warren County Chamber of Commerce, serving on the education committee. Outside his teaching and later administration posts at the Academy, Leasure has been a student mentor and head coach in golf as well as his promotion to assistant dean.

Married to Michelle Cantlebary, the couple has two children. He joined Rotary shortly after arriving in Front Royal 18 years ago.

(Malcolm Barr Sr., our contributing writer, is a member of the Rotary Club of Front Royal)

An adjunct faculty member for the past eight years, he spent many years working for the federal government, before serving as the senior technical manager of AOL for seven years. Currently, Professor Sunderlin is principal data engineer for Verizon Media Services.