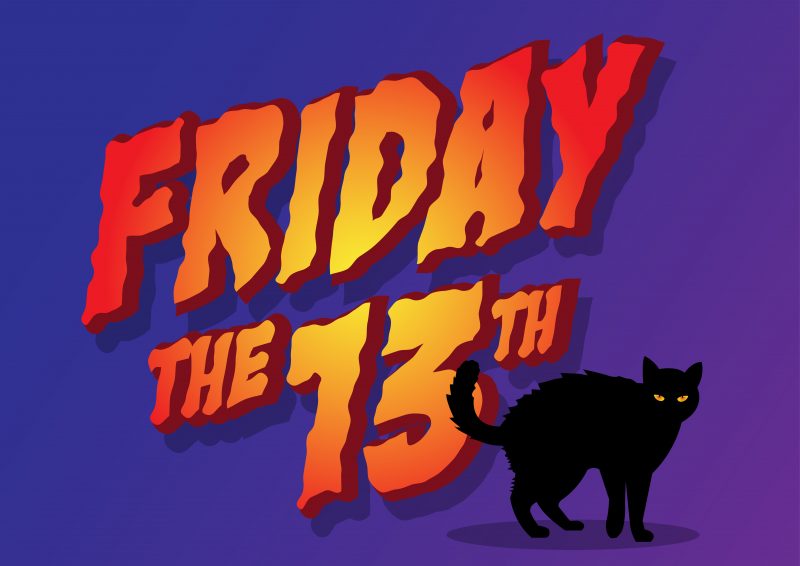 Do you suffer from paraskevidekatriaphobia? If so, you’re not alone. Fear of Friday the 13th dates way back. However, the exact origins of this superstition are unclear. Some suggest that it comes from the tale of Jesus’ last supper and crucifixion. Others claim that it stems from events on Friday 13, October 1307, when hundreds of Knights Templar were arrested and crucified.

Whatever the reason Friday the 13th became unlucky, it’s far from the only puzzling superstition in the world. Here are 10 others.

Receiving a knife. Has someone given you a knife as a gift? You better give them a coin in exchange, or else your friendship will be ruptured.

Opening an umbrella indoors. Why does opening up an umbrella indoors bring bad luck? The belief likely dates back to when the earliest umbrella models were sold. Their hazardous opening mechanisms and metal ribs presented a risk for fragile belongings when opened indoors.

Walking under a ladder. When you step under a ladder, some believe that you desecrate the Holy Trinity that the object forms with the ground and the wall. The ladder is, moreover, associated with death by hanging and Jesus’ crucifixion.

Breaking a mirror. In Rome, it was once believed that mirrors reflected the soul. If you broke a mirror, you damaged your soul and suffered seven years of bad luck. Why seven? The Romans believed that this was how long it took for the body to renew itself.

Cutting fingernails at night. According to the Japanese, if you cut your nails at night, you won’t be at your parents’ side when they die. Indians, on the other hand, believe it causes you to lose small, valuable objects.

Installing witch windows. In Vermont, and a number of other places, the gables of some homes have windows tilted 45 degrees to prevent witches from breaking in with their broomsticks. They’re aptly called witch windows.

Seeing a black cat. Black cats were believed to be witches’ companions and therefore evil. This was largely due to black being associated with the devil. In some cultures, black cats are thought to be harbingers of death.

5 things to consider when preplanning a funeral

A survival guide for Valentine’s Day

How will I survive Valentine’s Day? It’s a question that many people ask themselves when the red hearts start to appear in stores at the beginning of February. For some of us, it can be hard to stop this Valentine’s Day anxiety from building up to alarming levels. If that’s how you feel, here are some tips to help you make the best of the festival of love and avoid all of Cupid’s traps.

Couples
Does your loved one claim that Valentine’s Day is not really all that important to her? Don’t fall into the trap of not doing anything for her on this special day! It’s quite possible that she’s calling your bluff. Despite her apparent indifference, she expects to receive a little something, even if it’s only a card. Yes, it’s a contradiction, but that’s the way it goes.

Do you have kids? It’s important to depart from your usual family routine for the day or at least plan a romantic evening together. Valentine’s Day is an opportunity to renew the ties that bind you, to spend some quality time together. Reserve a table at your favorite restaurant well in advance, and don’t forget to organize a babysitter.

Singles
Are you single? For you, Valentine’s Day can be a heart-breaking day, especially if you’ve just broken up. But isolating yourself at home and succumbing to the dangerous trio of romantic movies, pajamas, and chocolate certainly won’t help you in any healthy way. All it does is guarantee depression.

Distract yourself instead. Plan a night out with friends, go out for a drink in a bar, or participate in a singles’ activity. Who knows, your new soul mate may be there as well. Remember that Valentine’s Day is a celebration of love in all its forms. Take the opportunity to tell your loved ones how much they mean to you; that includes your parents, siblings, children, and friends.

Do you dread Valentine’s Day? Follow the survival guide!

Flowers are ubiquitous on Valentine’s day, but few people realize that the various blooms in their bouquets are imbued with symbolic meaning. This year, consider using the language of flowers to let your sweetheart know you care.

Roses
A classic choice for Valentine’s Day, roses can express different things depending on their color.

* Red symbolizes a deep, passionate love, which is why they’re ideal for a romantic partner.

* Pink roses symbolize appreciation and make for a milder gesture than red ones. They’re a nice choice if you don’t want to overwhelm a new love interest.

* White roses stand for purity and innocence, making them a great choice for a friend, daughter or other relative.

Tulips
Beautiful but understated, tulips are a wonderful alternative to roses and also hold various meanings depending on their color. In particular, red tulips are a symbol of passion and love. And because they last longer than other cut flowers, tulips also represent the longevity of your relationship.

Lilies
These flowers, specifically the white ones, are associated with royalty and will express to your loved one that they’re a king or queen in your eyes.

These are just a few of the many flowers that you can include in your Valentine’s Day bouquet. If you’re still not sure what blooms to choose, your local florist will be happy to help.

This Valentine’s Day, you’re proud to celebrate the love that blossomed and matured between the two of you over the years. You also feel a little nostalgic thinking about where you met each other for the first time and all the emotions that characterized the beginning of your relationship. Remember that euphoria? The light-headedness, pounding heart, and butterflies in the stomach? Why did they eventually fade away?

The chemistry of love
What we commonly call love at first sight is largely a physiological occurrence. It is caused by the hormones secreted when two people are attracted to one another. In that sense, it really is all about chemistry. Here is a breakdown of what takes place:

• Phenylethylamine causes a state of euphoria, relaxation, and wellbeing.

• Oxytocin contributes to self-confidence, sensitivity to other people’s emotions, and feelings of attachment.

• Endorphins cause sensations of pleasure and relaxation.

But when it comes to mature love, why does the euphoria go away? Especially if you’re still very much in love with each other. According to scientists, the concentration of love-at-first-sight molecules begins to decline after about 18 months of being together, and they disappear completely after a relationship has existed for four years. However, it is possible to stimulate the secretion of small amounts of these molecules with regular physical activity, making love (orgasm), and by consuming certain so-called aphrodisiac foods with your partner.

Science and love are interrelated. That’s why when you meet someone the “chemistry” is so important.

Valentine’s Day is the perfect time to show those you’re closest to how you feel, whether they’re your friends or family members.

Celebrating with friends
Why not use the holiday to celebrate the bonds of friendship? Avoid pricey, romantic restaurant options and instead consider:

When deciding what to do, make sure to choose something that will be fun for your entire group.

Celebrating with family
Valentine’s Day is also a great time to connect as a family. You could:

Depending on the ages and interests of your family members, the right way to celebrate will vary.

Cooking for love on Valentine’s Day

Valentine’s Day is all about romance and seduction. Perhaps the old saying “The way to a man’s heart is through his stomach” has some truth to it, and just maybe the reverse is true as well. So, why not tantalize your loved one with a mouth-watering meal. Here are three succulent reasons to don your apron and get out the pots and pans.

Primo, there’s something rather alluring about watching your better half lovingly create a dish just for you. Add a bottle of good wine, some mellow background music, a beautifully set table, the soft glow of candlelight, and you’ve all the ingredients required for concocting a romantic evening.

Secondo, the kitchen is full of all sorts of tempting foods. Every sense is stimulated during a successful dining experience. So, when you plan your menu, go for intoxicating smells, exquisite flavors, unctuous textures, and appetizing colors. Even your hearing can get involved; think of the sound of sauces bubbling gently on the stove, juices sizzling in the pan, and roasts crackling in the oven. Conjure the mouth-watering sound of a lobster claw being cracked open. And don’t forget the aphrodisiac properties attributed to certain foods and spices.

Terzo, for a meaningful romantic interlude, there’s nothing like sharing a delicious meal while gazing into each other’s eyes over the candles’ soft glow. Share a bite from time to time, and don’t forget to save room for dessert.

You don’t have the skill of a Cordon Bleu chef? Don’t worry. A favorite restaurant will do just fine. Buon appetito!

A romantic meal is a wonderful way to savor good food and some precious time together.

The chemistry of love

Falling in love may seem like a mystery of the heart, but in fact, an array of chemicals and hormones are at play. According to scientists, there are three categories of romantic love: lust, attraction and attachment. Each of these categories is governed by its own cocktail of hormones and chemicals.

Lust
Testosterone and estrogen fuel lust, or the desire for sexual gratification. While it’s typically considered a male hormone, testosterone increases libido for just about everyone. This effect is less prominent with estrogen, but many women report being more aroused around the time they ovulate, when the hormone’s levels are highest.

Attraction
High levels of dopamine and norepinephrine are at play in the initial stages of a romantic relationship. Dopamine is released when we do something that makes us feel good, in this case, spending time with someone. Norepinephrine, which also plays a part in the fight or flight response, makes us feel more alert and nervous.

Together, these chemicals make people feel giddy, euphoric and energetic. They may also cause a decrease in appetite or the inability to sleep.

Attachment
Oxytocin and vasopressin are the hormones that make us feel connected and attached to another person. Together, they help people bond to one another and induce a desire to create a long-term, monogamous relationship.

The chemistry of love is complex and fascinating. Thankfully, understanding the forces at play makes it no less meaningful.

Join Ruby Yoga and Deborah Romero of Optimal Posture LLC for a series of workshops on moving more mindfully through life using the principles of yoga and the Alexander Technique. Slated for Saturday, Jan. 25,[...]
View Calendar