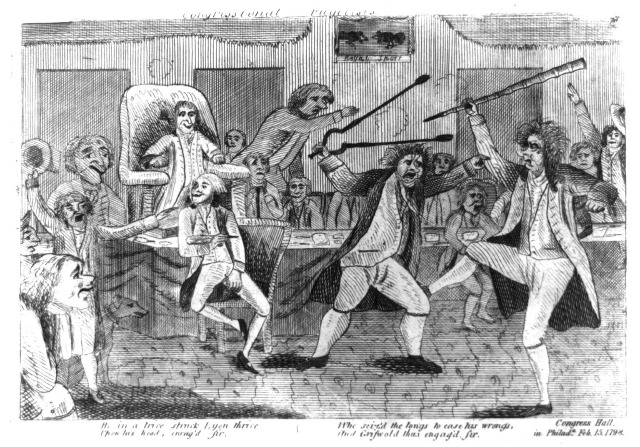 Imagine a political climate that is so hostile and divisive that legislators find themselves picking fights on the floor of the U.S. House of Representatives.

No, that didn’t happen last week.

It was 221 years ago on Jan 30, 1798 when the first fight broke out on the floor of the US House of Representatives, only to be followed by a second fight the next month.

And before you ask, it wasn’t Democrats versus Republicans. In fact it was a Democratic-Republican (a single political party) versus a Federalist.

Democratic-Republican Matthew Lyon of Vermont spit in the face of Federalist Roger Griswold of Connecticut. And that happened because Griswold had called Lyon a coward.

The event caused a stir, but troubles really ignited Feb. 15, 1798, when Griswold, the one who was spit on, took a hickory stick and beat the daylights out of Lyon.

Lyon, the spitter in the previous battle, was not going to take that so he got a pair of tongs from the fireplace and went after Griswold. Congressmen broke up the fight but Lyon evidently kept his tongs because minutes later he went after Griswold again and the fight was on.

The second famous fight was in 1856 when Democrat Congressman Preston Brooks of South Carolina, caned to unconsciousness his Republican opponent from Massachusetts, Charles Sumner.

Sumner, the Republican, whose party was founded to fight slavery, had ignited Preston’s ire by bad-mouthing Preston’s uncle over his support of slavery. Seems Sumner said the uncle took to himself an ugly mistress and harlot called Slavery.

Related Topics:DemocratsRepublicansU.S. House of Representatives
Up Next

4 facts you may not know about bullying

Contrary to what some people think, bullying isn’t a normal part of childhood. Here are some other realities about this harmful behavior that need to be acknowledged.

1. Kids don’t grow out of bullying
Unless children face meaningful consequences and learn that bullying is unacceptable, this behavior is likely to persist through adolescence and into adulthood. It can also evolve into dating violence, workplace harassment, and domestic abuse.


While children should be encouraged to stand up to bullies, retaliating with violence, insults or other aggressive behavior can lead to more persistent and severe bullying. Assertive responses and reporting bullying to an adult are more effective strategies.

3. Peers can stop bullying in seconds
Most bullying incidents happen when peers are watching, and their reaction plays a major role in reinforcing or stopping the behavior. In fact, research shows that when peers intervene, more than half of the time the bullying stops within 10 seconds.

4. Bullying can cause serious harm
Bullied children are more likely to experience headaches, stomach aches, anxiety, and depression. They’re also at greater risk of long-term mental health problems and suicide. Additionally, children who bully are more likely to use drugs and engage in criminal activity.

It’s only by dispelling myths about bullying and teaching children to develop healthy relationships that the issue can be properly addressed and bullying eradicated for good.

3 extraordinary marriage proposals to inspire you

Have you decided to ask your partner to marry you? If you’re wondering how to make sure the moment is perfect, here are three incredible stories of how people popped the question. (Spoiler alert: they all said yes!)

1. Filmmaker Lee Loechler took his high school sweetheart, Sthuthi David, to a special screening of Sleeping Beauty in the Boston area. Toward the end of the film, as the prince approached the sleeping princess, the animation changed to feature characters who resembled Lee and Sthuthi. After waking her with a kiss and holding out a ring, the cartoon prince Lee tossed the ring box off-screen for his real-life self to catch. Lee got down on one knee and, in front of friends and family members who’d been sitting at the back of the theater, he asked Sthuthi to marry him.

2. Politician Tim Wilson delivered a speech on the floor of the Australian parliament in favor of a bill to legalize same-sex marriage. The bill had passed the senate the previous week and was being debated in the lower house. As the member of the parliament concluded his speech, he turned his attention to the public gallery where his long-time fiancé, Ryan Patrick Bolger, was sitting. The couple had been engaged for nearly a decade but were unable to make it official. Tim looked up at Ryan and proposed once again. The bill passed and, three months later, the couple married.

3. Inspired by videos of flash mobs she’d seen online, Isabelle Marin put together an elaborate performance for her partner, Jean-François Dumais, at a shopping mall in the Quebec City region. A violinist serenaded him in the food court and a dance troupe performed in the atrium. Friends and family members emerged from the gathering crowd to hand Jean-François roses. Then, as a local singer (and friend) Mélissa Bédard belted out a ballad, Isabelle made her entrance on an escalator and got down on one knee.

If there’s one thing to take away from these stories, it’s that you can be as creative and theatrical as you want during a proposal — the important thing is to give it your personal touch.

6 ways to protest against racial injustice

As the leader of the American civil rights movement, Martin Luther King Jr. organized a number of peaceful protests throughout the 1950s and 60s to end racial discrimination and segregation in the United States. In honor of Martin Luther King Jr. Day, which falls on January 18 this year, here are six ways to protest against the ongoing racial injustice in this country.

1. Educate yourself using the abundance of books, articles, podcasts, and movies available on racism and racial justice, and learn how you can affect change.

2. Volunteer for a local organization that seeks to address issues in your community that disproportionately affect African Americans such as food insecurity and under-funded schools.

3. Sign petitions demanding racial justice, write to your local officials to advocate for policy changes, and start conversations about race with the people in your life.

4. Attend a demonstration calling for an end to police brutality and systemic racism. You can also join an aid group that provides supplies and assistance to protestors.

5. Donate money to bail funds and organizations led by people of color that are pushing for change. If you’re an artist, you can sell your work and donate the proceeds.

For more information about how you can fight against racial injustice in your community, reach out to local organizations.

Every man of humane convictions must decide on the protest that best suits his convictions, but we must all protest. — Martin Luther King Jr., 1967

Martin Luther King, Jr.: Those who knew him grow old; the promise lives

The people who heard Martin Luther King, Jr. speak in person, or live on the television or radio–those people have grown old.

Is time that those old people ask the young: Have you heard his speech? Have you read about Martin Luther King’s dream? Did you read his Mountaintop speech?

Any of King’s speeches evoke spirit and truth, but one speech shines out for its hopeful and, in retrospect, its chilling words.

That is the Mountaintop speech, given April 3, 1968, at the Church of Christ in Memphis, Tenn.

In this speech, King mused that if given any time in history, he would have chosen that moment, that very day above all others. He spoke about the great and pivotal hour for the country and the world as all confronted injustice.

Then, he remembers his brush with death years before when he was stabbed and how close he came to missing that day.

And then he proclaims that he has seen the Promised Land:

“We’ve got some difficult days ahead. But it really doesn’t matter with me now, because I’ve been to the mountaintop… Like anybody, I would like to live a long life. Longevity has its place. But I’m not concerned about that now. I just want to do God’s will. And he’s allowed me to go up to the mountain. And I’ve looked over. And I’ve seen the Promised Land. I may not get there with you. But
I want you to know tonight, that we, as a people, will get to the Promised Land!”

King’s words, later recalled, send a shiver through hearts and minds. Those words are worth recalling even 53 years later, that one was led by God to the mountaintop, and he saw the promised future of his people fulfilled.

Ice fishing is a great way to relieve stress, reconnect with nature, and enjoy your own company or that of your fishing buddies. Whether you’re ready to go or still waiting for the ice to thicken, here are a few tips that will help guarantee you have a good experience.

Check the regulations
Before you head out, make sure you have the necessary permits and that you’re allowed to fish in the intended area. You also need to be familiar with the catch and possession limits for various species. Having this information will allow you to avoid unpleasant surprises and ensure that your activities are legal.


Take into consideration the weather and ice conditions before you decide if you’ll be fishing in a shack or simply out on the ice. Mother Nature can be unpredictable, and without the right gear, you may have to turn back before you make your first catch.

Check your equipment
Many parks and lodges offer all-inclusive ice fishing packages. In this case, all you need to bring are your warm clothes and plenty of enthusiasm. However, if you have your own equipment, you’ll want to assess its condition before you head out. Visit hunting and fishing shops in your area if any of your gear is damaged or needs to be replaced.

Following these tips will ensure that once you drill your holes, you’ll be able to relax, unwind, and fully enjoy the ice fishing experience.

How to safely watch wildlife in winter

If you spend time exploring the outdoors this winter, you might cross paths with hares, foxes, deer, and other wildlife. Here’s how you can observe these creatures safely (and comfortably) without disturbing them.

Act appropriately
It’s important to always treat wildlife with caution and respect. If an animal reacts to your presence, you’re too close. Since these creatures need to conserve energy to stay warm in winter, startling them causes undue stress. In fact, keeping your distance is as much for their safety as it is for yours.


It’s best to wear layers and opt for breathable fabrics when you engage in outdoor winter activities. Keep in mind that you won’t produce as much body heat when you’re standing still to watch wildlife. You’ll also want to have binoculars or a camera to make the most of your sigh-ting. However, keep in mind that drones shouldn’t be used around wild animals.

If you want to reconnect with nature this season, look for places where you can hike, snowshoe, and cross-country ski in your area.