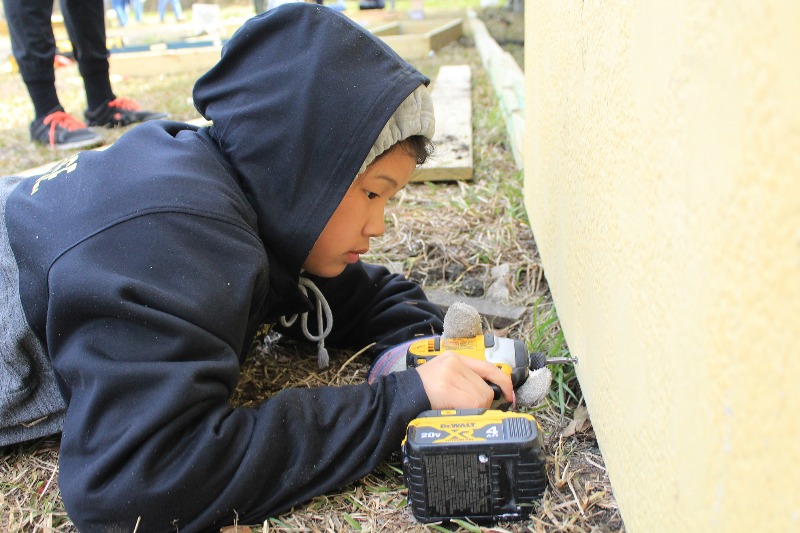 While their peers were enjoying some downtime or visiting colleges, 16 Randolph-Macon Academy students, along with six adult chaperones, spent most of their spring break at the Washington United Methodist Church Disaster Recovery Center in eastern North Carolina.

The group received some on-the-job training the first day. The recovery center had been in operation since Hurricane Matthew in 2016 and was in need of a few repairs itself. The students stained decks and walled in a pavilion for supply storage; this conveniently gave them some training with the tools they would soon be using on someone’s home.

Belhaven, NC, where the students were assigned, was devastated by Hurricane Florence in September 2018, with most businesses and homes being impacted by the high flood waters. The R-MA group was the first one to work on the mobile home they went to. The woman who owned the trailer, Ms. Clark, and her fifth-grade daughter had been out of their home for nearly six months. Because Belhaven is so susceptible to flooding, she had used the FEMA funds she received to lift the trailer higher in hopes of preventing a similar disaster in the future.

“The flood waters were four feet high, so all the mobile homes in the area were severely damaged unless they were raised, which hers was not,” said R-MA Chaplain Joshua Orndorff, who organized and led the trip.

The group worked on skirting the outside of the mobile home and put in flood vents. They also built two 8×8 decks so the groups that would follow them later could get inside the trailer to work on flooring, insulation, and other repairs.

Izzy Spencer and other volunteers paint the outside of the skirting after it has been installed on the mobile home.

Unbeknownst to them, their hard work was being watched. On the last day they were there, the neighbors approached the group and asked for their help. The railing on their house stairs was damaged, resulting in a dangerous fall for an older gentleman. The R-MA group sent a crew over and repaired the railing on the stairs and around the porch.

“It was really neat for the students to realize that they were being watched,” commented Orndorff, “that how they acted and the work that was being done was being noticed in the community. So to be able to help another family while we were there was a blessing for the family, but also our students, to be able to serve, to help them out.”

“It kind of made it real that we were making a difference to someone,” explained Urenna Okoye ’20, who was one of the crew who went to work on the railings.

The week wasn’t all work for the students. They enjoyed s’mores around the fire, music, Kan-Jam, spike ball, and even a trip to the beach (which took place on a windy, rainy day, but the students enjoyed it anyway). On Tuesday evening, they met up with several R-MA alumni from the local area, who took them to a fishing club.

Those who attend mission trips to help others often find that they themselves are the ones who are blessed. This trip was no exception. On the last evening, the group gathered around the fire for the final time for a simple yet meaningful ceremony.

“The most memorable moment for me is when my peers and I sat around the fire and shared many stories and burdens that we had weighing on our shoulders,” said Emma Faust ‘19. “We exchanged vulnerability, trust, tears and understanding.”

Okoye also recounted that evening as being something she would always remember. “We wrote our burdens on paper, and we could speak them or not, then we put them in the fire and symbolically let go of them. Everyone was being so vulnerable. I’ll always remember that…that and the stars. You don’t see stars here like we saw there.”

LFCC Adult Education program among the best in Virginia

Virginia State Police Senior Trooper R. Riggs responded to a report of a plane crash in Frederick County. The crash occurred Wednesday, February 24, at 2:22 p.m. near the intersection of Back Mountain Road and Fishel Road.

The preliminary investigation revealed that a Single Engine Cessna Aircraft suffered engine failure shortly after taking off from Winchester Regional Airport. The aircraft attempted to make an emergency landing in a field and impacted the ground which caused it to overturn.

The pilot, Jonathan D. Behnke, 42, of Mount Airy, MD, suffered minor injuries in the crash and was transported to Winchester Medical Center for treatment.

No one on the ground was injured as a result of the crash.

The FAA and NTSB were notified of the crash.

The crash remains under investigation.

People Incorporated is helping community members who have been impacted by the COVID-19 pandemic access internet service. The agency will set up accounts and pay for six months of internet service for clients who qualify.

Clients can qualify for this service if they have been impacted by the pandemic in some way – through the loss of a job, reduction in hours, the need to school children from home or another impact. Clients must also meet income eligibility, documentation requirements and show a need for internet service.

“Access to the internet is a necessity,” said Angie Groseclose, vice president and chief operating officer at People Inc. “It’s necessary for telehealth appointments, searching for a job and for kids to attend school, and it’s an extra expense that may not be in everyone’s budget. We want to make internet service more accessible for those who need it.”

This service is funded by emergency CARES Act funding and is available to residents in Clarke County, Frederick County, Page County, Shenandoah County and Warren County.

Interested residents can call People Inc. toll-free at 833-962-2039 for more information and to verify eligibility.

The Humane Society of Warren County “Polar Plunge” delayed from February 20 due to “too-polar” weather here in northwestern Virginia has been rescheduled to Saturday, March 13 – Don’t worry, it will still be a “Polar Plunge” because it’ll still be winter then, though hopefully for the plungers with a continuation of the current turn toward spring-like 60 degree temperatures! In its inaugural year of 2020, the event became a popular fundraiser supporting the Humane Society’s efforts on behalf of the local animal community and the HSWC’s Julia Wagner Animal Shelter.

As reported in the original press release on the event: this year’s “plunge” is made possible through the sponsorship of City National Bank, Cool Techs Heating and Air, Ellen Aders State Farm, AirPac, MDUB Chauffeur Services and Cavalier Kennels. This year’s event is expected to help raise as much as $12,000 for the Humane Society.

There were 35 plungers initially signed up to take a dip in the icy water, each working to help raise much-needed funds for homeless animals in Warren County. There are 15 new plungers, and 20 returning plungers who will all run into the Culpeper Lake at the 4-H Center, followed by a warm-up at the fire pit.

The event team will be ensuring that all CDC Covid-19 guidelines are followed, and masks will be required at this outdoor event.

In 2020, pre-pandemic, the top fundraiser was Molly Llewellyn, who raised over $1,000 for the shelter. There was also an award for best dressed. Both of these awards will be returning for the 2021 event.

The Humane Society of Warren County is a non-profit animal shelter that houses homeless, neglected, abused and unwanted animals. While primarily dealing with cats and dogs, the shelter has also been home to livestock, birds, reptiles and more.

Executive Director Meghan Bowers avoided taking the plunge last year, but is leading the charge into the water in 2021 dressed as a shark, so far raising about $467 from friends and family.

Hot drinks, Strites Donuts and music will keep participants warm during the run up and aftermath of the short but stimulating plunge.

For more information on this event or others, please visit HSWC Events Page.

On February 24, 2021, Governor Ralph Northam announced that as COVID-19 hospitalizations and infection rates continue to decline and vaccinations rise in Virginia, certain outdoor sports and entertainment venues may begin to operate at increased capacity starting Monday, March 1. He amended Executive Order Seventy-Two with the next steps of the “Forward Virginia” plan to safely and gradually ease public health restrictions while mitigating the spread of the virus.

“Thanks to the hard work and sacrifice of all Virginians, hospitalization and positivity rates across the Commonwealth are the lowest they have been in nearly three months,” said Governor Northam. “As key health metrics show encouraging trends, and we continue to ramp up our vaccination efforts, we can begin to gradually resume certain recreational activities and further reopen sectors of our economy. Even as we take steps to safely ease public health guidelines, we must all remain vigilant, so we can maintain our progress—the more we stay home, mask up, and practice social distancing, the more lives we will save from this dangerous virus.”

The Commonwealth will maintain a Safer at Home strategy with continued strict health and safety protocols including physical distancing, mask-wearing requirements, gathering limits, and business capacity restrictions. The current modified Stay at Home order will expire on February 28, 2021.

Governor Northam is beginning to ease public health restrictions by taking steps to increase capacity limits in outdoor settings, where evidence shows the risk of airborne transmission of COVID-19 is lower. The key changes in the Third Amended Executive Order Seventy-Two include:

• Dining establishments: The on-site sale, consumption, and possession of alcohol will be permitted until midnight, extended from 10:00 p.m. All restaurants, dining establishments, food courts, breweries, microbreweries, distilleries, wineries, and tasting rooms still must be closed between midnight and 5:00 a.m.

The new guidelines will be effective for at least one month and mitigation measures may be eased further if key health metrics continue to improve. Current guidelines for retail businesses, fitness and exercise, large amusement venues, and personal grooming services will remain in place. Individuals are strongly encouraged to continue teleworking if possible.