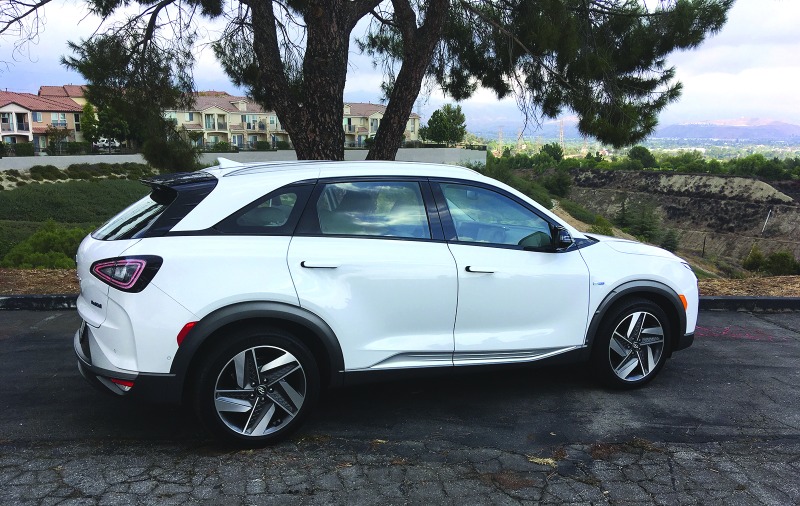 We can easily foresee a future where roads are abuzz with electric vehicles: after all, new EV models are popping up every year featuring increasingly powerful batteries. In addition, an expanding network of charging stations is beginning to dot urban landscapes. However, we shouldn’t be too quick to dub the electric vehicle the car of tomorrow. There’s another eco-friendly option that’s starting to make its presence felt: the hydrogen vehicle.

Hydrogen vehicles, also known as fuel cell vehicles, are all the rage in California. Just ask car manufacturers like Toyota and Honda, whose hydrogen models—respectively the Mirai and the Clarity—can increasingly be seen cruising up and down California roadways. These automakers, as well as a number of industry experts, foresee a future in which electric and hydrogen cars will share the road.

However, as things stand at the moment, electric vehicles have the upper hand on hydrogen ones. The quantity sold in North America practically doubles each year and the number of charging stations is increasing at a similar rate. As for hydrogen vehicles, California is their lone epicentre. The new technology is more or less confined to this state, which alone has the necessary infrastructure—specifically, hydrogen stations and hydrogen-generation facilities.

While they’re both eco-friendly options, hydrogen vehicles and electric vehicles have several important differences. Here are some key points to consider.

• Recharging. Recharging a hydrogen vehicle takes no longer than getting gas, but filling up an EV is a lot more slow going. Level 2 charging stations (currently the most common option) take between six and 12 hours to supply a complete charge; fast charging stations take about 30 minutes.

• Range. Hydrogen vehicles get an impressive range of nearly 300 miles whereas the median range for EVs is 114 miles. However, certain EV models do match hydrogen vehicles for range, such as the Tesla, which delivers up to 335 miles before needing to be recharged.

While it’s too soon to tell whether the hydrogen vehicle or electric vehicle is the car of tomorrow—or whether they’ll share the title—either way, the future is looking greener.

A brief introduction to self-driving cars

Does the music you listen to affect the way you drive?

According to research conducted by the South China University of Technology, the type of music a motorist listens to influences the way they drive. Here’s what the study uncovered.

When participants listened to music with a tempo of above 120 beats per minute, they tended to drive faster than they did when listening to music with a slower tempo. The difference in driving speed amounted to about 10 miles per hour. Lane changes also occurred twice as often when drivers listened to this kind of music.

Recommendations
To thwart the impulse to speed, the best songs to listen to in the car are ones with a tempo that’s about the same as your resting heart rate, or between 60 and 80 beats per minute. There’s no shortage of tunes that fit the bill, from “I’m Yours” by Jason Mraz to “I Don’t Want to Miss a Thing” by Aerosmith.

If you tend to speed, there are certain types of music you should avoid when you’re on the road including heavy metal, drum, and bass, techno and dubstep. The tempo of most songs in these music genres is more than 120 beats per minute.

The next time you create a driving playlist, be sure to choose tunes that help you maintain your speed and keep you calm and collected on the road.

The experience of driving an EV

Electric vehicles (EVs) are reliable, economical, and eco-friendly. But what’s it like to drive one? Here’s what you should know.

In-town driving
EVs are well suited to the stop-and-go nature of city driving. Thanks to the regenerative braking system in most models, the kinetic energy that’s lost every time you apply the brakes is recovered and used to power the motor. This allows you to drive longer on a single charge.

Since an EV’s motor doesn’t idle, you won’t waste any power if you get stuck in traffic. And when congested roads do clear, the instant torque of an electric car allows you to accelerate with ease.

Highway driving
Electric cars must meet the same safety standards as conventional vehicles, so you can cruise down the highway without worry. Additionally, since the battery pack is usually installed in the floor, most models have a low center of gravity which allows for better handling.

Owning an EV can also speed up your commute since many areas allow you to use carpool lanes if you’re driving an electric car. You’ll also likely appreciate the quieter ride as they make considerably less noise than gas-powered cars. And if you need to use a toll road or take a ferry, many are cheaper or free for electric cars.

Finally, since EVs have fewer parts than vehicles that run on fuel, they don’t require much in the way of maintenance and repairs. You’ll spend more time on the road and less at the garage.

4 tips for reversing with a trailer

If you’ve never used a trailer before, you’ll need to be careful. Hitching one to your car can make driving a challenge, especially when you need to reverse. Here are four tips to make backing up with a trailer safe and easy.

1. Assess your surroundings
Driving with a trailer reduces visibility. Before you start to reverse, it’s a good idea to get out of the car and make sure nothing is in your way. Identify any trees, fence posts, and other obstructions that you’ll need to avoid when you back up.


A trailer adds considerable length to your vehicle, so the regular position of your mirrors may be incorrect. Adjust the angle of your side and review mirrors to minimize blind spots.

3. Grip the bottom of the wheel
If you turn while reversing, your car and trailer will go in opposite directions with the hitch acting as a pivot point. To avoid confusion, hold the bottom of the steering wheel. This way your hands will move in the same direction as the trailer when you turn. If you rotate the wheel to the right, for example, your hands will move up the left side of the wheel and the trailer will reverse to the left.

4. Advance slowly
Once you’re ready to reverse, proceed with caution. If you become disoriented or something in the environment changes, stop. Drive forward to straighten up your vehicle and trailer, then try again.

In order to successfully reverse while towing a trailer, you need patience and practice. To make things easier, ask a friend to guide you from outside of the car or invest in a backup camera so you can see where you’re going.

How a car’s design can affect your mood

When it comes to choosing a car, the design is an important consideration. It can impact your mood, mental state, and ability to concentrate, which in turn can make you a better and safer driver. Here are three design elements with the power to influence your mind and emotions.

Color
It’s not surprising that a vast majority of cars on the road are either white, grey or black. For many people, these colors suggest wealth and cleanliness. On the other hand, bright and bold tones like red and yellow tend to be associated with youth and dynamism. Similarly, a neutral interior is more likely to have a calming effect on the driver than one that’s flashier.


If there’s too much light in the car’s cabin, it can be a distraction. However, some types of light could help you focus on the road. Warm light is thought to be soothing and comfortable, while cool light is said to make you more alert.

Textures
Soft, smooth surfaces are generally associated with positive emotions, whereas rough textures are more likely to evoke negative feelings. Additionally, if the material feels luxurious, it can evoke pride and make for a more comfortable ride.

Next time you’re shopping for a car, pay attention to these details. This way you’re sure to choose a vehicle that truly makes you happy.

A brief history of the dashboard

In modern cars, dashboards include a variety of useful features such as GPS and a Bluetooth connection. But dashboards weren’t always so multifunctional. Here’s a look at their evolution.

Early dashboards
Dashboards date back to when people relied on horse-drawn carriages for transportation. The front of the carriage was outfitted with leather or a wooden plank to protect passengers from dirt “dashed up” by the horse’s hooves.

When cars were first introduced, the dashboard served a similar purpose to deflect dirt and rocks kicked up by the front wheels. Once manufacturers started putting the engine at


the front of the car, the dashboard also offered protection from the heat and oil.

Advancements
Over time, cars became increasingly sophisticated. By the 1930s, gauges were installed on the dashboard. This was done to imitate the appearance of cockpits and take advantage of growing consumer interest in airplanes.

The first airbags were introduced in the 1970s and, within two decades, virtually all types of cars had a dashboard equipped with this life-saving device.

Over the years, dashboards have come in a variety of styles and included chrome features, wood panels, and an array of dials. These days, a single touch screen is increasingly the norm. Sleek and versatile, this device reduces the number of buttons on the dashboard while allowing drivers to control everything from the stereo to the air conditioning system.

How to drive safely with a pet onboard

If you drive with your dog or cat in the car, it can be a distraction. Here’s how to make sure you and your pet arrive at your destination safely.

Follow the rules
Many states have laws in place to prevent distracted driving caused by having an animal in the car. While these regulations vary, they typically forbid you to drive with a pet on your lap.

Additionally, some states ban you from having unrestrained animals in the car cabin or in the bed of a pickup truck while driving.

Secure your pet
If you’re in an accident or have to brake suddenly, an unrestrained animal is likely to be thrown. This can severely injure you, your pet, and any passengers.

To prevent your animal from moving freely around your car while you’re driving, take one of the following precautions:

• Attach your pet to the back seat using a harness

• Place your pet in a securely stowed travel crate

• Confine your pet to the back seat using a safety net

If you want to drive with a cat or dog in the car, these precautions are in your best interest as well as that of your animal companion and the other drivers on the road.