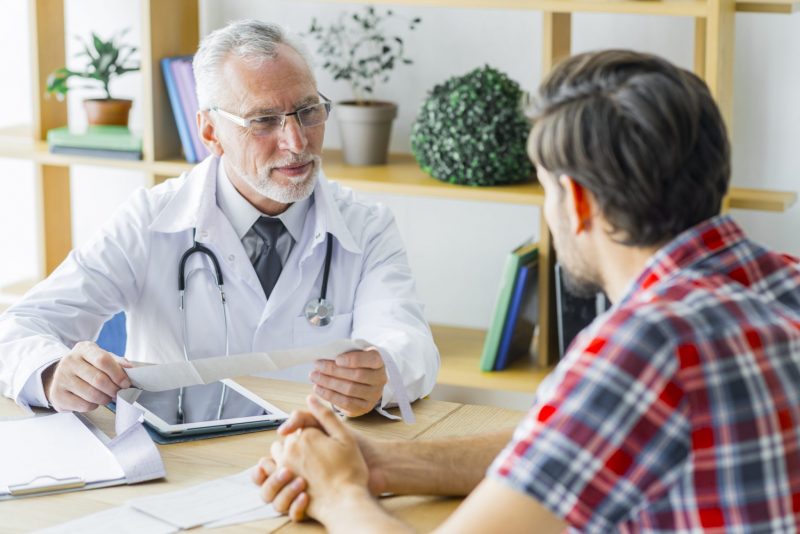 It is the second most-common cancer for men, and a cancer that almost always attacks older men: Prostate cancer.

According to cancer.net, skin cancer is the only type more common in men than prostate cancer.

An estimated 174,650 men in the United States will be diagnosed with prostate cancer. About 60 percent of cases are diagnosed in men over 65. The average age of diagnosis is 66. The disease rarely occurs before age 40.

Here are 10 risk factors for prostate cancer, according to Duke University News.

Race: African-American men are more likely to develop prostate cancer and die from it than Caucasian men.

Height and weight: Obese men are at risk of developing aggressive prostate cancer and of dying from their cancer. Taller men have an increased risk.

Geography: Men living in North America, the Caribbean, northwestern Europe, and Australia have a higher incidence of prostate cancer.

High-calcium diet: High dietary intake of calcium from dairy products is implicated, though not in men whose calcium came from non-dairy sources.

Unfortunately, prostate cancer symptoms occur only when it has reached an advanced stage. The symptoms can include trouble starting to urinate or an inability to urinate, increased urinary frequency, burning or painful urination, blood in the urine or semen, painful ejaculation, erectile dysfunction, and pain in the lower back, hips, or thighs, according to Duke University. These symptoms can occur from a condition other than prostate cancer.

Especially if you have prostate cancer in first degree family members, see a physician for testing and cancer screening.

Related Topics:cancerprostate cancer
Up Next

The CBD craze focuses on as yet untested claims 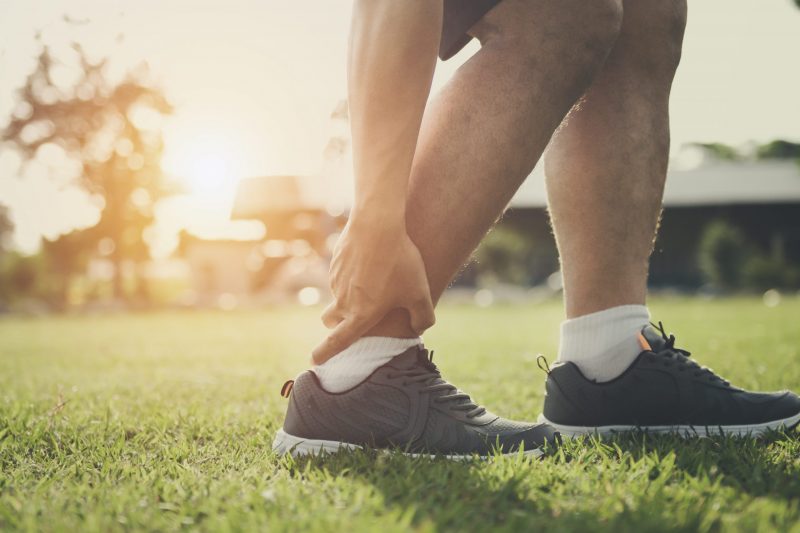 If you get some puffiness around the ankles or an unpleasant tautness in your calves, you have swollen legs. It’s a condition everyone experiences at one time or another, like during a spell of hot weather, a whole day standing on your feet, or after a long car trip.

Normally, your body maintains the right amount of fluid in tissues by performing a delicate balancing act. You drink fluid and get rid of it when you breathe, sweat, or urinate. But sometimes not enough fluid leaves your tissues, and the result can range from a little puffiness to swelling.

These are the most common causes:

* Immobility. When you walk, run, or move about, leg muscles contract, promoting blood flow. If you stand still, or sit still as you do on a long airline flight, blood can pool in your veins. This makes it difficult for fluid to move from body tissue back into vessels.

* When your work keeps you standing or sitting in one spot during the day, use your legs whenever possible. Shift your weight from one foot to another. Change positions in your chair. Take opportunities to walkabout.

* Heat. Hot weather can cause your blood vessels to expand, making it easier for fluid to leave them and enter tissues. During hot weather, it’s even more important to move about as much as possible while working.

* Salty foods. When you take in more salt than your body needs, the body dilutes it by retaining fluids and making you thirstier.

* Menstruation and pregnancy. Changing levels of hormones can affect the rate at which fluid enters and leaves the tissues.

Doctors at the Mayo Clinic say you should see your doctor promptly if your leg swelling is sudden, painful, persistent, in one leg, or accompanied by shortness of breath, weight gain, or redness.

One virus was the scourge of humans

As bad as Covid-19 has been, it is not even close to the worst viral disease that has swept humanity.

That honor probably goes to smallpox, a disease so toxic that it wiped out entire populations, killing up to 500 million people in the 20th century alone. It was especially deadly for children, killing up to 80 percent. Survivors of any age were left disfigured, blind, or both. After exposure, symptoms began within a week to 19 days. High fever, fatigue, aches, and vomiting appeared first, followed by red sores on the face, hands, arms, and, finally, the trunk of the body. These sores left deep, pitted scars on survivors.

According to estimates by the Centers for Disease Control, the COVID-19 virus kills between 0.26 percent and 0.4 percent of infected people. Smallpox killed no less than 20 percent and up to 60 percent in some populations.

According to the Annals of Internal Medicine, the earliest written accounts were from China in about 400 BC, but possibly earlier.

The good news
Today smallpox is gone. The last case in the U.S. was in 1949 and the last case in the world was in 1978. Today the only remnants of smallpox are the light scars left by vaccinations on people born before the 1980s. In 1979, it was declared eradicated after massive inoculation campaigns on every continent. It is thought to live only as a sample in three labs in the world.

First vaccinations
For more than a thousand years, people knew that once a person contracted smallpox, they would ever after be immune. This knowledge led to the first genuine vaccinations.

In China, as early as 400 BC, smallpox scabs were ground up and injected into the noses of healthy people.

The first western experimentation was in 1789 by English doctor Edward Jenner, who found that a similar virus, cowpox, could protect humans. The technique, which used fluid from an active smallpox sore, was scratched into the skin or vein.

The technique was not perfect. People contracted a fever and perhaps some sores, but recovered. However, there was a risk of contracting active disease.

3 educational apps that teach kids about their health

Help your children learn more about their health. Here are three great apps for curious kids.

1. Caillou Check Up
This app lets your kids enact a visit to the doctor, which can sometimes be scary or stressful. It covers routine procedures like taking a temperature, checking blood pressure, and administering a shot. Every interaction is presented in a stress-free, positive light and the app helps children learn what to expect when visiting the doctor. The app is available for both iOS and Android devices.

2. Wash Your Hands Ben The Koala


This app teaches children how to wash their hands by encouraging them to imitate a fun character. It has a timer accompanied by a musical theme. This helps kids scrub their hands long enough to wash away germs. When the allotted time is up, the app signals them to stop. This makes the activity enjoyable and helps kids become more independent. The app is available for both iOS and Android.

3. GlucoZor World
With this app, your child can adopt a diabetic dinosaur. They can play with him in various ways, but they also need to take care of him by feeding him a balanced diet and giving him the correct dose of insulin. In addition, the quizzes in the app will help kids learn more about diabetes. The app is available for both iOS and Android.

These apps are all free and will encourage your kids to learn more about their health.

Vaccine technologies: Why a COVID vaccine will take months, not centuries

The smallpox virus raged among humans for 10,000 years before a leap of insight led to the vaccine that killed it forever. The insight took about 300 years to develop.

Today, in the wake of the COVID-19 crisis, drug companies throughout the world are experimenting with vaccines. One company, Moderna, took 42 days to create an experimental vaccine.

The most obvious reason is the research infrastructure: Laboratories, drug companies, medical systems — systems we take for granted — have never before been available on such a wide scale. Humans are in the era of science and technology.

Still, of the seven known coronaviruses, there are no known human vaccines.

According to Johns Hopkins Senior Scholar Dr. Amesh A. Adalja, the key to the newly rapid development of vaccines is new vaccine platform technologies. Writing in leapsmag.com, Adalja says these platforms use the same building blocks to make more than one vaccine. Using the basic platform, researchers are able to, in effect, switch out one targeted virus (or bacteria or other organisms) like a person switches out a video game cartridge. One example of that is the Ebola vaccine, which uses another virus as a platform with the Ebola protein inserted.

A variety of different approaches are being used to create a COVID vaccine. Moderna is using an RNA approach. Inovio is using a DNA model in which genetic material is injected into the platform and human cells translate it into a viral protein. At that point the immune system makes antibodies.

Other approaches include nanoparticles (by Novavax), while other companies try to adapt an avian coronavirus vaccine.

According to Adalja, a coronavirus vaccine could possibly confer protection against other human coronaviruses, eliminating their use as a biological threat in the future.

And, even curing a common cold.

Be careful out there this summer

Beautiful grass and long stretches of parkland offer an open invitation for summer activity. But it can be an invitation for aches and pains if your body isn’t prepared for vigorous exercise.
The long quarantine period means that people might not be as ready for summer exercise as they have been.

Orthopedists at Northwestern Memorial Caremark Physical Therapy Center in Chicago say these are the most common summer sports injuries and how to prevent and treat them.

Tennis: Tennis elbow (tendinitis). Improve your technique. Gradually build up time of play, which should be no more than two hours a day. Rackets should have properly fitted grip and string tension. Treatment includes rest, strengthening the forearm with exercises.

Volleyball: Condition for strength during the season. Stretch and warm up gradually. Treatment includes rest, stretching, strengthening the rotator cuff with exercise.

If your fingers are frequently stiff and un¬comfortable, especially in the morning, you may be developing stenosing tenosynovitis, better known as trigger finger. This common condition causes discomfort when flexing or extending the affected finger, which is often the thumb or ring finger. Bending or straitening it may result in a palpable snap. In severe cases, the finger may get stuck in a bent position.

Causes
Trigger finger is the result of inflammation in the flexor tendon sheath (the protective covering that surrounds the tendons in your fingers). This causes the affected finger to become partially or fully immobilized. Prolonged inflammation may result in nodules forming in the tendon, thereby restricting the finger’s movements even further.


Typically, trigger finger caused by unusual and forceful hand activity will respond well to rest, a splint, and anti-inflammatory medication. However, severe cases and those caused by a chronic health condition such as arthritis may require a corticosteroid injection to be resolved. Should this treatment fail to produce results, surgery will likely be necessary.

If you think you may be suffering from trigger finger, be sure to make an appointment with your doctor.