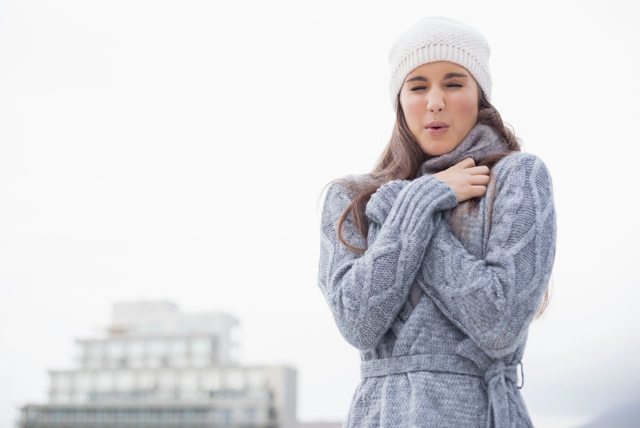 Suddenly in February, the day turns sunny. It’s 50 degrees and it feels marvelous. Turn down the heat! Go for a walk!

So why does 50 degrees feel so chilly in October?

Physiologists say the body adjusts to increasing cold over time. In October, our bodies just haven’t adjusted to the temperature drop, according to the Wall Street Journal.

The human body has two main ways to cope with chills when the temperature drops. The first is to constrict blood vessels. This pushes warm blood to the body’s core. That’s when your arms and legs could start to feel colder. The second way is to shiver. That’s when you turn up the heat 10 degrees.

Humans, it turns out, have continuously invented ways to cope with cold by changing their environment — turning up heat sources, staying near those heat sources, and adding layers of clothing.

Interestingly, humans who constantly experience cold temperatures, like native people in the Arctic, just don’t feel as cold as others. Fish industry workers, whose hands are in cold water for hours, have been found to have warmer hands than other people.

The physiological explanation is that blood vessels don’t constrict so much after long-term exposure. So those people really are warmer.
But if you aren’t an Eskimo and you do need thick, fuzzy socks all the time, there could be a medical explanation.

Also the body’s metabolic responses to cold can be slower.

According to the Journals of Gerontology reported in 2011 that older people on average had a body temperature .3 degrees lower than younger people.

All of which leads us to what we already know: We have got to buy that sherpa blanket.

When feeling cold is a symptom
Feeling cold is normal during the winter or as we age, but sometimes it can be a symptom of other problems of even a side effect of medicine.

Spreading holiday cheer to the elderly

There are many environmental factors that can impact your respiratory health and make it harder for you to breathe. However, there are things you can do to protect your lungs. Here are 12 healthy habits you should adopt.

1. Eat a nutritious diet that’s rich in fruits and vegetables

2. Exercise for at least 30 minutes every day

4. Receive the recommended vaccines for your age group

5. Quit smoking and vaping (or avoid starting in the first place)

7. Try not to use aerosol products such as hairspray

8. Wear a mask if you work in a dusty environment or handle toxic products

10. Test your home for radon

11. Remove asbestos from your home if necessary

12. Make sure your home’s ventilation system is clean and in good working order

If you’re concerned about your lungs, talk to your doctor about getting a computed tomography (CT) scan. This test can help detect infections, lung cancer, blood clots, and other lung problems.

Did you know?
According to the American Lung Association, 150 million people live in a county with an unhealthy level of air pollution. That’s nearly five in 10 Americans.

Normal aging: what to expect as you get older

From lapses in memory to joint pain and hair loss, a wide range of symptoms is often chalked up to getting old. But which changes are really considered a normal part of the aging process? Here’s some of what you can expect as you get older.

A different experience for everyone
Aging is a complex process that affects every system in the body. But while all people age, not everyone does so at the same rate. This means that people of the same age can look and feel very different as they get older. In other words, their chronological ages are identical, but their biological ages don’t match.


It’s important to note that normal age-related changes happen gradually and aren’t the result of an underlying medical condition. Nevertheless, aging does eventually have noticeable effects on the body, including:

Tips for healthy aging
The best way to delay the effects of aging is to maintain healthy lifestyle habits. Among other things, you should avoid smoking, limit your alcohol consumption, exercise daily, get enough sleep, keep in touch with loved ones, and challenge your mind with puzzles, reading, and strategy games.

Finally, be sure to schedule regular appointments with your family doctor, optometrist, audiologist, and other health-care professionals. This increases the likelihood of medical issues being detected and treated early. 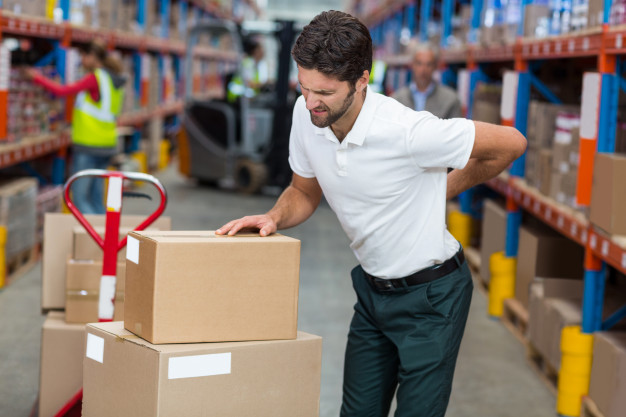 After an injury, workers who receive higher prescription doses of an opioid are at increased risk of longer-term use, according to researchers at the Workers Compensation Institute. Research focused on workers from 33 states who were injured in 2016.

Those workers who were prescribed a dose of 500 milligrams or more were more likely to need opioids longer. About 10 percent fell into that category. Only 7 to 8 percent of workers prescribed small doses had longer-term dispensing.

Other factors contribute to longer-term opioid use and possible dependence. Among those was taking an opioid along with central nervous system depressants.

Which workers most likely to be prescribed opioids?

If you are from a small town, work in a small company, or work in the mining or construction industry, you are most likely to be prescribed opioids after an injury.

In mining, injured workers were prescribed opioids 62 percent of the time. In construction, the rate was 55 percent.

The study was conducted by the Workers Compensation Institute.

No one has studied Smartphone Pinky yet, but a plethora of Twitter, Instagram, and TikTok users claim it’s real with photographic evidence.

Supposedly a dent appears in the little finger on the middle bone. Sometimes people say the position of their pinky changes, or that the finger starts to sway downward from the knuckle.

Although the supposed malady is debated, notice that most people do hold their phones so that the little finger takes most of the weight.

With Cell Phone Elbow, pain and tingling in the forearm and little finger come from holding a mobile phone up to the ear or holding it while lying in bed for a long time. The pain comes from the shoulder-rubbing the ulnar nerve, one of the major nerves in the arm. Just six minutes of those postures increase the strain on the nerve by 69 percent.

Texting Claw is a repetitive strain injury that presents as pain in the thumb and wrist. It comes from making small repetitive movements with the thumb against the screen. Reduced texting appears to alleviate the problem.

Finally, neck pain can come from staring down at a screen for a prolonged period, which increases strain on the shoulder blade.

Many of today’s jobs, hobbies, and modes of transportation make it easy to succumb to a sedentary lifestyle. Unfortunately, prolonged periods of inactivity are linked to an increased risk of heart disease, diabetes, and obesity. If you find yourself sitting too often, here are seven simple ways to incorporate more movement into your daily routine.

1. Sit on a stability ball rather than the couch while you watch TV or play video games.

2. Walk around the room while you’re on the phone. For longer calls, consider taking a stroll around the block.

3. Listen to audiobooks or podcasts while you use an elliptical machine, stationary bike, or treadmill to make your workout more interesting.

4. Use a standing desk. Do simple exercises, such as calf raises, while you complete routine tasks like checking your email.

5. Time how long it takes you to do an active chore like vacuuming, and then see if you can beat your previous record.

6. Take the stairs instead of the elevator. To really get your heart pumping, climb them two steps at a time.

7. Do jumping jacks or run in place during the commercial breaks while you watch a hockey or basketball game on TV.

With a bit of creativity and effort, there are plenty of simple and fun ways to be more active.

Everyone gets a charley horse now and again while walking. But what if you experience a painful cramping sensation more often than normal, or even every time you walk? Claudication – the medical term for leg pain while walking – is a common symptom of peripheral artery disease (PAD), an often undetected and sometimes dangerous condition, according to the Harvard Heart Letter.

PAD occurs when fatty deposits narrow and clog arteries outside the heart, most often in the legs. While some people have mild or no symptoms, cramping in the arms or legs that starts during physical activity and disappears after a few minutes of rest occurs in some PAD patients, according to the Mayo Clinic. Pain may also occur in the buttock, hip, thigh, or calf, according to the Centers for Disease Control and Prevention.

Other symptoms of peripheral artery disease include:


-Hair loss
-Smooth, shiny skin
-Skin that is cool to the touch, especially if it occurs with pain while walking that subsides after stopping
-Decreased or absent pulses in the feet
-Persistent sores in the legs or feet
-Cold or numb toes

Peripheral artery disease is often a sign of fatty deposits in other areas of the body, which can reduce blood flow to the heart and brain, according to the Mayo Clinic. Contact your physician if you are experiencing these symptoms and over age 65; over age 50 and have a history of diabetes or smoking; or under age 50, but have diabetes and other risk factors like obesity or high blood pressure.

According to the CDC, a doctor may use a variety of tests and imaging techniques to diagnose this issue. Treatment may include aspirin or other antiplatelet medications, as well as lifestyle changes like tobacco cessation and exercise. In some cases, surgery may be necessary.