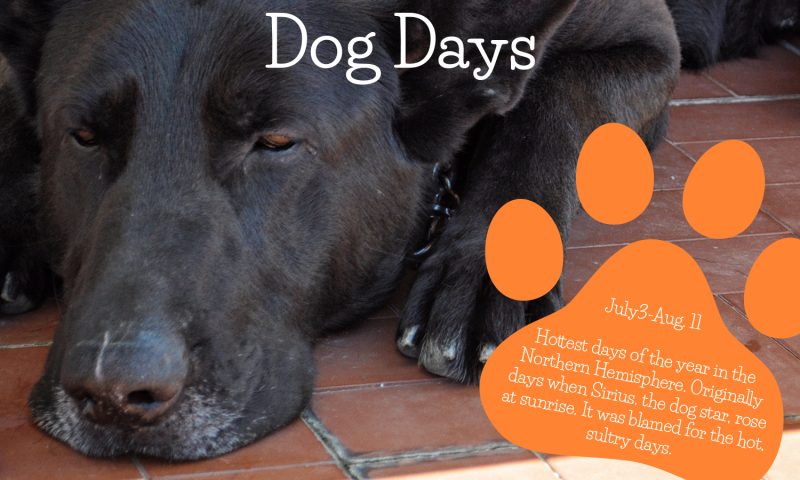 These are the hottest days of the year, variously calculated to run from 30 to 54 days. Though they are named after our canine friends, our current Fidos and Busters had nothing to do with the original designation.

In ancient times when Sirius, The Dog Star, rose just before or at about the same time as the sun, people believed that the star was the cause of the hot, sultry weather and named the short season after the star. Hot weather combined with common summer diseases of the age to make it a very unhealthy and uncomfortable time. To appease Sirius, the ancients prayed and made sacrifices.

All of that, of course, was before air conditioning and modern medicine that has pretty well eliminated the worst suffering from both man and dog. But hot weather can still get you down, Dog Days or not.

Heat exhaustion is one-way heat does it. If you get pale, sweat profusely has a weak, rapid pulse, queasy stomach and headache or dizziness, get yourself to a cool place and lie down. Sponge your skin and stay near a fan. Drink something cool (not iced). If symptoms last or your temperature stays at 100 degrees, see your doctor.

Heatstroke is much more serious and requires medical attention. Symptoms include dizziness, rapid heartbeat, diarrhea or nausea, and hot, dry skin with no perspiration. Cool anyone with these symptoms as for heat exhaustion but also place ice packs under armpits, behind the neck, and on the groin while waiting for an ambulance.

Be kind to your animals too. Never tie up an animal outside in the sun without shade or water. If you see an animal treated this way, call your city’s animal management.
When walking your dog, stay away from paved streets and sidewalks. In the hot sun, paws burn.

Related Topics:Dog days of summer
Up Next

Do you have what it takes to be an air traffic controller?

Air traffic controllers are typically responsible for monitoring and directing the movement of aircraft on the ground and in the air. This includes establishing flight plans and updating crews on weather conditions. If you’re fascinated by aviation and thrive in a fast-paced work environment, this might be the job for you.

Necessary qualifications
Air traffic controllers have a number of responsibilities that have to be carried out under considerable pressure. You must be able to keep your cool in all circumstances, as people’s lives may depend on your decisions. You also need to be adept at working independently and as part of a team. Self-confidence, good judgment, an analytical mind, and a keen eye are required traits.

As an air traffic controller, you need to remain alert and be able to adapt rapidly to changing circumstances. It’s essential that you possess excellent communication and interpersonal skills as well as good vision and a willingness to work unconventional hours.

Access to the profession
In order to get a job as an air traffic controller, you must have patience and perseverance. The training program, which must be certified by the Federal Aviation Administration, is lengthy and arduous. However, once you have the necessary qualifications, there’s no shortage of positions available. And you’ll actively use the knowledge you acquired during your training for the entirety of your career.

4 reasons to take up taekwondo

Taekwondo is a Korean martial art that emphasizes kicking techniques. It was developed shortly after World War II and can be practiced by children and adults alike. Here are four reasons to take up taekwondo.

1. To improve physical fitness
Practicing this martial art provides a full-body workout. In order to deliver strong blows and hold your own against an opponent, you need muscular strength and cardiovascular endurance. Many of the kicks and hand attacks involve jumping or spinning and need to be executed with precision.


Taekwondo requires balance, flexibility, and agility. As you master different techniques, you’ll develop quicker reflexes and learn how to respond to physical instability. These skills also reduce the risk of injury in your daily life.

3. To boost self-esteem
Martial arts training teaches you how to overcome adversity and face challenges with confidence. As you progress in taekwondo, you’ll be rewarded with a series of belts that demonstrate your achievements.

4. To help relieve stress
Taekwondo requires concentration and discipline. To achieve this, you have to set aside personal and professional worries when you step onto the mat. This sport is a healthy outlet for stress and allows you to blow off steam.

If you’re looking for a fun way to stay active or you want to sign your child up for a new sport, consider taekwondo. Some studios even offer family classes.

Do you want to communicate with more people or challenge yourself to develop a new skill? Here are five reasons to learn Sign language.

1. It facilitates interactions. If you learn Sign language, you can have in-depth discussions with people who are deaf. Communicating in Sign language is also an alternative to raising your voice when conversing with someone who has partial hearing loss.

3. It makes you a better listener. Sign language requires you to focus your attention. You can’t turn away or multitask and still hold a conversation. This level of engagement shows respect and can strengthen relationships.

4. It’s a valuable learning experience. Picking up a new language improves cognitive function and memory. It also introduces you to another culture, and learning Sign language can raise your awareness of the challenges faced by people who are deaf.

5. It promotes child development. Research shows that teaching a toddler Sign language can speed up their speech development. Start with signs for common words like food, again, milk and sleep.

If you’re interested in learning Sign language, find out if there are courses offered in your area. Alternatively, you can find video tutorials and other resources online.

The start of a new school year is the perfect occasion to give your children a short lesson that will be a good investment in the local economy. Make the most of the back to school shopping blitz to raise your children’s awareness of the many benefits of shopping locally.

There’s only one condition for turning this intensive training into a resounding success: you just have to buy all school supplies and clothing items from businesses near you.

When shopping with your children at local stores for stationery, books, school bags, clothes, shoes, sporting equipment, and electronics, mention to your kids that when local people frequent these stores they are helping to create jobs and incomes for others in their town.

Bring to your children’s attention the fact that if these businesses remain profitable, one day they might be the source of a summer job or even, at a later date, a full-time job that will allow them to stay in the town they grew up in.

If your children have busy schedules, they’ll appreciate that shopping close to home will save lots of traveling time. If they’re keen environmentalists, make them aware of the fact that buying local helps to reduce greenhouse gases, not to mention all the money you’ll save on gas. Best of all, financial savings could trickle down to them in the form of pocket money. That will help them get the message!

Shopping for back to school supplies close to home is a great way to show your children the benefits of supporting local businesses.

The ability to drive provides autonomy and freedom. Unfortunately, there may come a point when it’s no longer safe for you to get behind the wheel. Here are 10 signs that it’s time to give up your license.

1. You feel nervous and insecure behind the wheel
2. You often get disoriented or lost while driving
3. You regularly bump into garbage cans or jump the curb


4. You have reduced peripheral vision and can’t see both sides of the road when looking ahead
5. You have trouble staying in your lane
6. Your reaction time is slow, and you’ve had a few close calls
7. You’re easily distracted and run stop signs or red lights
8. You take medication with side effects that may impair your driving
9. You have reduced mobility that prevents you from checking your blind spots
10. You’re frequently honked at or gestured to by frustrated drivers

If some of this applies to you, it doesn’t necessarily mean you need to give up your license. Depending on your situation, it could be enough to avoid driving at night, in bad weather, or during rush hour. You might also benefit from having a passenger guide you when driving in an unfamiliar area.

However, if your loved ones refuse to get in the car with you, it’s likely a sign that your driving has become dangerous. For their safety and yours, as well as other drivers, ask your doctor to assess you before getting back on the road.

A brief guide to gym etiquette

If you work out at a gym, you’ll need to be mindful of other patrons. Here are six rules to follow when you’re at the gym.

1. Pay attention to how you smell
Avoid putting on cologne or perfume when you go to the gym as strong scents can easily overwhelm people with allergies. However, do make sure you wear clean gym clothes and effective deodorant.

2. Ask for help if you need it


Misusing gym equipment can result in embarrassment and injury. Before you use a machine for the first time, ask one of the trainers on-site for assistance.

3. Don’t drop weights
In addition to making a lot of noise and disrupting the surrounding people, dropping free weights, or letting a machine’s plates clank together, can damage the equipment.

4. Limit conversations
While you’re working out, avoid recounting your weekend or exchanging gossip. Help yourself and others stay focused by saving the socializing for later.

5. Clean and put away equipment
Avoid leaving weights, ropes, and other items lying around once you’ve finished using them. Remember to wipe down machine seats, handlebars, and any other surfaces you touch.

6. Leave space for others
If you’re taking a break or finished with a machine, step aside so someone else can use it. Be courteous and share the equipment.

If you follow these rules, you’ll help make the gym a welcoming environment for everyone.