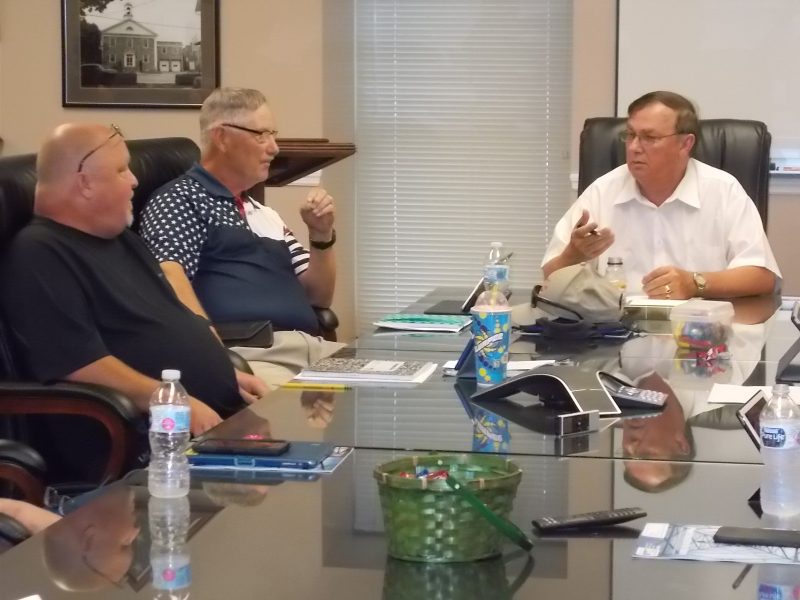 What might the mayor of Front Royal and the owner of the New England Patriots have in common? If you said criminal scrutiny involving massage parlors, you would be correct.

Tharpe declined further comment pending conversations with an attorney. However, he said he did not foresee the charge impacting his service as mayor of Front Royal in the immediate future – “I am an elected official,” he pointed out.

When queried about a criminal investigation aimed his way revealed when Warren County Commonwealth’s Attorney Brian Madden recused himself on August 30, 2018, from involvement in any potential prosecution of the Front Royal mayor, Tharpe expressed confusion.

“I can’t find anything out – no one has called; no one has threatened to take me to court. If someone would pick up the phone and call me, I could say ‘yes’ or ‘no’ – but I guess the system doesn’t work that way,” Tharpe lamented of the informational vacuum he was operating in.

“It’s just baffling – I’m absolutely clueless. I don’t do murder; I don’t write bad checks; I haven’t had any dealing with the EDA and Jennifer McDonald – I don’t have any loans with the EDA; I don’t shoplift; and I don’t do, I don’t mess with drugs – we know people who have lost kids to addiction,” Tharpe continued as he tried to fathom the nature of any potential criminal investigation into his behavior.

As of Friday, April 12, Tharpe now knows the nature of the charge against him – a charge he asserts is “baseless”. Winchester Commonwealth’s Attorney Marc Abrams was appointed by the court to replace Madden on the prosecutorial side were charges filed from the investigation into Front Royal’s mayor.

On Sunday, January 17, 2021, at approximately 7:15 PM, an alleged road rage incident involving two passenger vehicles was reported eastbound on John Marshall Highway in the area of Ashland Court. Witnesses described hearing a single gunshot, and when inspecting the trunk of their car, observed what appeared to be a bullet hole. The suspect vehicle was described as black 2007 Chevrolet Trailblazer with dark tinted windows, last seen travelling eastbound onto Interstate 66. Thankfully, no one was injured during the incident.

Anyone who has information regarding this incident is asked to contact WCSO Deputy John Gregory at (540) 635-4128.

State Police initiated the traffic stop at approximately 7:50 p.m. as a 2002 BMW 330CI was traveling South on Interstate 81 at the 286 mile-marker in Shenandoah County. The violation was for speeding, as the BMW was driving 100 mph in a posted 70 mph zone.

The pursuit continued onto Rt. 42 in Woodstock, Rt. 11 in Edinburg, and in Mount Jackson before ending back on I-81 South. The BMW eventually ran off the left side of the roadway causing it to collide with a State Police patrol car before being contained on the right shoulder on I-81 at the 263-mile-marker. The driver, Adams, was taken into custody and transported to RSW Regional Jail and held without bond.

No troopers were injured during the course of the pursuit.

The pursuit reached speeds of up to 130 mph.

On Monday, January 11, 2021, at approximately 4:32 PM, a Warren County Sheriff’s Office deputy observed a Mercedes travelling at a high rate of speed in the area of Riverton. The WCSO deputy attempted to stop the Mercedes for a traffic violation in the area of 522 Park and Ride, and the driver of the Mercedes refused to obey and yield for the deputy. The driver of the Mercedes then crossed a concrete traffic barrier, driving into the opposite lane of travel where the Mercedes struck an occupied vehicle, failed to stop and then continued eastbound onto Interstate 66.

The driver of the Mercedes continued to accelerate at a high rate of speed and the deputy lost sight of the vehicle and terminated the pursuit. Within a short time after the termination of the pursuit, local citizens began calling the Warren County Sheriff’s Office Emergency Communications 9-1-1 Center to report a Mercedes driving recklessly, forcing other motorists off the road and passing dangerously across the double yellow lined roadway of John Marshall Highway travelling into the Town of Front Royal. WCSO deputies responded to that area and located the aforementioned Mercedes. As WCSO deputies attempted to stop the vehicle, the driver of the Mercedes continued to refuse to yield and took flight at a high rate of speed onto Leach Run Parkway.

The 62-year-old Korean man arrested November 30 in Georgia for the 2008 murder of Du Chil Park, also known as Buddhist Monk Mogu, was denied bail in his first court appearance since being extradited to Fauquier County on December 15.

Won Yong Jung was in Fauquier County General District Court on December 23 seeking release on a cash bond. As initially reported by “Fauquier Now”, that bond was denied following a 20-minute hearing during which the prosecution described the knife attack on the 56-year-old Park as “brutal” and contended Jung remains a threat, not only to flee due to the gravity of the Second-Degree Murder charge and the top end 40-year sentence it carries, but to the community at large.

As noted by Fauquier Now, in denying the bond request Judge Allison Coppage ruled for Deputy Commonwealth’s Attorney Jamey Cooke’s arguments that the defendant, who utilized an English to Korean translator during the hearing, had not effectively countered the prosecution’s case against bond. Jung’s next scheduled court date is April 8 for a preliminary hearing on the evidence at the root of the Commonwealth’s Second-Degree Murder case against Jung.

As Royal Examiner initially reported following Jung’s arrest in his home area of Duluth, in Gwinnett County, Georgia, over 12 years earlier Park’s body was discovered several days after his death from multiple stab wounds at his Free State Road property in Marshall. Information released by Fauquier authorities in the wake of his 2008 murder indicated Park came to America in 1998 and established the Jungtosa Zen Buddhist Temple in the Springfield area of Fairfax County, moving the temple to Marshall in March of 2004 and continuing his healing work in acupuncture and moxibustion, the latter also “an oriental medicine therapy”.

Born in Kyong Ju, South Korea around 1951-52, Fauquier authorities also noted that “in the 1970’s/80’s Park was an activist against former Korean military governments. He was imprisoned in 1974 for hiding an activist on the run and then became a Monk in 1978” and “operated a small temple in Chung Noung, a part of Seoul, where he treated poor people with acupuncture and moxibustion.”

A Warren County resident with connections to Park and his healing work as Monk Mogu, noted he often travelled to the Front Royal area to treat children and adults, some with serious physical disabilities. “His Mantra was always ‘to help alleviate pain for all sentient beings’,” that area friend told this reporter.

It will be interesting to hear the prosecution address motive in Jung’s alleged murder of Du Chil Park, or Monk Mogu as he was known to patients and friends of his temple.

On Monday, November 30, 2020, the Front Royal Police Department received two reports regarding thefts from vehicles. Incidents occurred at Front Royal Christian School, located at 80 N. Lake Ave. and the other at Commonwealth Assisted Living, located at 600 Mount View St. Security video footage was reviewed at Front Royal Christian School, which showed a dark-colored Escalade entering the parking lot. A female driver and male passenger were both seen entering vehicles without consent, where money was reported missing. The victim from Commonwealth Assisted Living reported her purse and wallet missing.

The suspects were identified as James Warren, 33, and Shawnte Mullins, 22, both of Front Royal. Warren and Mullins were contacted and interviewed. Both suspects admitted to their involvement in these incidents. The suspects also admitted to committing similar crimes in Frederick County, VA. James Warren was charged with 3 counts § 18.2-147 Climb into Vehicle/Boat to Commit Crime and 2 counts § 18.2-96 Petit Larceny. Shawnte Mullins was charged with § 18.2-147 Climb into Vehicle/Boat to Commit Crime and § 18.2-96 Petit Larceny.

James Warren, 33. Photo is courtesy of RSW Regional Jail. There is no photo available for Shawnte Mullins.

James Warren and Shawnte Mullins were arrested on December 21, 2020, without incident and transported to Rappahannock Shenandoah Warren (RSW) Regional Jail where they went before the magistrate and released on a $5000 secured bond. Their first court appearance will be December 29, 2020, at 10:00 am in Warren County General District Court.

A Luray woman, whom police stopped for driving with a suspended license and found to be in possession of methamphetamine and other drugs, pleaded guilty yesterday in U.S. District Court to a pair of federal drug charges, Acting United States Attorney Daniel P. Bubar announced.

Amanda Marie Catoe, 32, pleaded guilty yesterday to one count of conspiring to distribute 500 grams or more of methamphetamine and one count of possessing with the intent to distribute 50 grams or more of methamphetamine. Catoe faces a mandatory minimum sentence of 10 years in prison and a maximum statutory sentence of life in prison. She will be sentenced on April 21, 2021.
“Methamphetamine continues to plague communities in the Western District,” Acting U.S. Attorney Bubar stated today. “Prosecuting those that distribute meth and therefore perpetuate the destruction caused by it continues to be a top priority of this office and I appreciate the hard work of our federal and state partners that went into this case.”

According to court documents, on January 8, 2019, officers stopped Catoe’s vehicle for driving with a suspended license. A narcotics canine arrived at the scene and alerted to the vehicle. Upon searching the vehicle, officers found several bags of methamphetamine, marijuana, and cash.

The investigation of the case was conducted by Bureau of Alcohol, Tobacco, Firearm, and Explosives, Luray Police Department, and Page County Sheriff’s Department. Assistant United States Attorney Jeb Terrien is prosecuting the case for the United States.