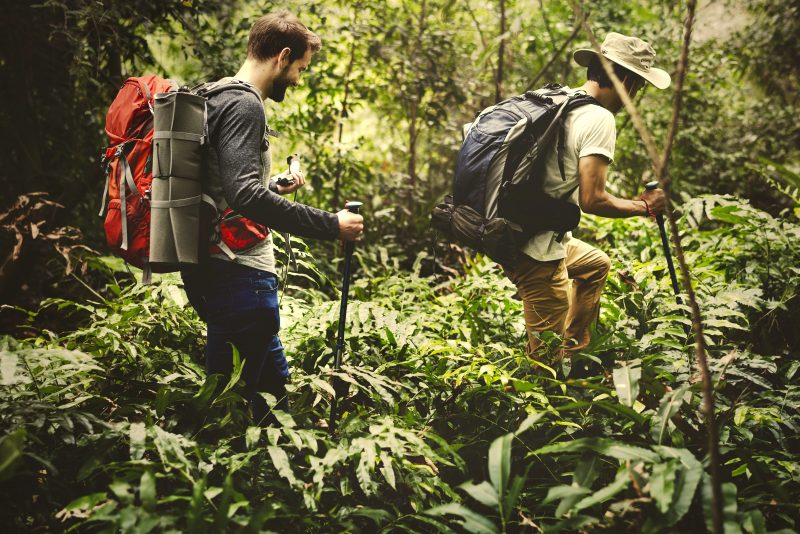 According to a recent study, the folks who embark upon extreme backpacking adventures and exploration are not the ones who are most vulnerable to disaster.

Instead, it’s the day hikers among us. These are the people who tend to head out without much backup food or gear and, when they get lost, can very quickly run into trouble.

The study, called “Safe and Found” and conducted by smokymountain.com, analyzed more than 100 news articles about lost hikers to extrapolate the ways people had gotten lost, what they did to survive, and how they made it out.

The most common reason people got lost was that they simply wandered off a trail (41 percent), followed by bad weather, falling off the trail, getting separated from a group, injury, and a handful of other reasons.

Survival often hinges on the ability to find a combination of warmth, shelter, food, and water — and preparation is the key to each of them. Survival tips include packing a core group of essentials, bringing a map that you’ve studied ahead of time, carrying high-quality clothing, checking the forecast, and practicing your fire-making skills, among others.

If you do become unsure of your location, you can start breaking off branches in the direction you’re headed, and skin a 6-inch cut on a sapling with your knife, as the inner branch shows white and is easy to follow.

And in a worst-case scenario, drink the water you find. Statistically, you’ll be rescued within 24 hours, which makes death by dehydration more of a risk than infection.

6 reasons to take up knitting or crochet

The generation that rejected society moves toward church

Need inspires solutions: The invention and re-invention of the odometer

Whether plotting a road trip or training for a triathlon, we need our odometers. But did you ever wonder how they were invented?

The odometer was actually invented and reinvented a number of times. From ancient Greeks to a Mormon pioneer, our mileage-tracking device has received quite a bit of attention.

The National Parks Service credits a Roman architect and engineer named Vitruvius with the first design. Vitruvius built a contraption that looked a bit like a wheelbarrow, which automatically dropped a pebble into a container at each revolution of the wheel, measuring the distance traveled.

Two other iterations showed up in the coming centuries, plus a third designed for ships. Then Benjamin Franklin created a version in 1775 to track his mileage as postmaster between Philadelphia and Boston. It is unclear whether Franklin then asked for mileage reimbursement.

William Clayton is credited with creating a detailed guide for Mormon travelers crossing the plains from Winter Quarters, Neb. to Salt Lake City, Utah. In addition to noting camping locations, terrain, and the availability of water, grass, and timber, Clayton recorded the mileage thanks to the “roadometer” he invented.

In a prime example of need inspiring invention, Clayton created the device in 1847 after realizing early on that he needed a more accurate way to measure the distance. He measured the left rear wheel of one of the wagons to determine its circumference and calculate how many rotations equaled a mile.

Clayton then tied a marker on the spoke and walked beside it, counting the rotations —what must have been a painstaking process, as he notched 4,070 rotations for 11 and quarter miles plus 20 revolutions the first day.

How to support nurses on the front line of the pandemic

May is Nurses Month, an annual event that sets out to honor the contributions of America’s nurses. These essential workers are invaluable members of their communities, offering help to patients and their families, and playing a key role in delivering healthcare services. That’s why this year’s theme is Nurses Make a Difference.

In light of the pandemic, supporting nurses is more important than ever. Over the last year, these workers have risked their own safety to help those who need care. Here are some ways you can offer your encouragement.

1. Give them a shoutout
Publicly give your thanks to nurses on social media using the hashtag #Support-HealthcareHeroes. Recognition can go a long way in making the nurses you know feel valued.

2. Offer them a meal
Order takeout for the nurses you know, and see if you can have it delivered to the hospital or clinic where they work.

3. Help with childcare
If you know a nurse who has children, consider offering to lend a hand while they’re at work or when they need a break.

4. Drop off groceries
It can be hard for nurses to find time to pick up the essentials. Reach out to a nurse you know, and see if you can help by bringing them the supplies they need.

5. Make a donation
There are numerous campaigns dedicated to raising funds for nurses. Consider making a donation to the American Nurses Foundation, the American Association of Critical-Care Nurses or a local nursing school.

Nurses working on the front line of the pandemic deserve to be reminded that they’re valued. This year for Nurses Month, consider reaching out and showing your appreciation.

Do you want to pull out all the stops for Mother’s Day this year? Whether your mom lives nearby or far away, here are a few ways to celebrate the occasion.

Theme party
Host an event your mom will never forget by choosing a theme. You could make the celebration a beach party, a Victorian ball, a Mexican fiesta, a casino night soirée, or a Great Gatsby-style bash. Consider your mom’s tastes and get creative. Think about the decorations, costumes, music, and other details so everyone can truly immerse themselves in the chosen universe.

Fun activity
Celebrate your mom by doing something together that you know she enjoys. It could be a walk in the forest, a visit to a museum, a day at the spa, a hot air balloon ride, or a wine tasting at a local vineyard. If Mom preferred to stay home, consider playing board games or having a movie marathon with all of her favorite snacks. Give her a unique experience, and she’s sure to be pleased by your thoughtfulness.

Video call
If you can’t get together with your mom in person, organize a video call that shows her how much you care. You could read her a letter or poem you wrote for the occasion, share a festive meal together despite the distance or play an assortment of games to brighten up her day.

So, what kind of celebration will you put together for Mother’s Day?

What to consider when buying a new bike

Do you want to buy a new bike? It can be hard to find the right one when there are so many models to choose from. Here are a few criteria to keep in mind when making your decision.

Purpose
You should use a road bike for getting around town but a mountain bike for riding on unpaved trails. That’s why it’s important to consider how you intend to use your bike before selecting one.

Think about how long, how often, and what type of terrain you want to ride on. You should also consider if you plan on taking your children with you or if you need the bike to fit on the bus or subway. Once you answer all of these questions, you’ll be able to find a bike that meets your needs.

Size
When seated on a bike, you should be able to comfortably reach the handlebars and almost fully extend your legs while pedaling. Standing over it, make sure there’s at least an inch of clearance between the frame’s top tube and your leg inseam.

Note that bike models designed for women usually provide better comfort for female riders. In any case, you should have your bike adjusted by a professional to make sure it’s as comfortable as possible.

Quality
Your budget will largely determine the quality of your frame. In general, more expensive bikes use lighter, more durable materials and have better adjustment options. To get the best value for your money, do your research and compare prices.

Keep in mind that the staff at your local bike shop can help you find the perfect bike for your needs, as well as a helmet, bike lock, and lights.

Flowers for the mothers in your life

Giving flowers on Mother’s Day is a time-honored tradition. If you’re looking to show your mom, your grandmother or the mother of your children that you care, here are some suggestions.

Cut flowers
Fresh bouquets are sure to please the ladies in your life. Offer them bundles of cut roses, gerberas, tulips, camellias, carnations, irises, lilies or birds of paradise. Select blooms in their favorite colors or fragrances, or let your florist make a custom arrangement.

Flowers for the garden
If the mother you’re celebrating has a green thumb, consider giving her a new plant for her garden. Pretty perennials like primroses and peonies or flowering shrubs like rhododendrons and lilacs are all good choices. Assess the landscaping of the yard to help you make the right choice. Alternatively, ask a professional at your local nursery for suggestions.

Flowering potted plants
There are many types of flowering plants that make great Mother’s Day gifts. You could get an African violet or orchid for her home, or a hanging basket or rose bush for her yard. Just be sure the person receiving your gift is interested in keeping the plant alive. When in doubt, look for easy-to-care-for plants like peace lilies and Christmas cacti.

Regardless of what type of flowers you buy for Mother’s Day, remember to include a card. The best part about your gift is sure to be that it came from you.

Mother’s Day is May 9th

Would you like to help your mom relax and unwind this Mother’s Day? If so, here are a few gift ideas that may be a good fit.

1. An overnight stay at a hotel
There’s nothing like a change of scenery, even a brief one, to take the edge off the daily grind. Depending on her tastes, opt for something sleek and polished in town or quaint and charming off the beaten track. With room service and onsite amenities, Mom will be able to indulge in a little pampering.

2. A home-delivered meal
Help your mom take a break from cooking by serving her a meal she doesn’t have to make. Order a dish she loves from her favorite restaurant or buy the ingredients to prepare it yourself. Either way, she’s sure to appreciate your thoughtfulness.

3. A basket of bath products
Give your mother an excuse to bask in the bath by offering her an assortment of goods. Put together a basket filled with a bubble bath, a sponge, scented candles, a bottle of wine, a box of chocolates, and other treats for a relaxing experience.

4. A spa treatment and massage
This guaranteed anti-stress remedy is the perfect way to help Mom unwind. If you’re not sure which types of massages and treatments she would enjoy, opt for a gift card from a place that offers a variety of services.

From scented oil diffusers and adult coloring books to foot massagers and facial steamers, there are many other gifts that can help your mom relax. Look for these and other products and services in your region.

What’s that buzzing? Meet with local apiarists of the Beekeepers of Northern Shenandoah (BONS) and discover the art of Apiculture (a.k.a. Beekeeping). This monthly program series examines all aspects of beekeeping from hive construction to[...]
View Calendar