Every other one of us were warned of our personal computers possibly being compromised – hacked – during the last week or so by a 300-word missive from Yahoo, our server, which appears itself to have been hacked almost three years ago. A little late in the telling, but better late than never was my first thought. My second thought was, “Is this message itself a fake?”

“No, it was for real,” advised Bob Way of Linden whose expertise in the computer field is close to impeccable. You only have to read his professional resume to prove my words. What to do, I asked?

I don’t believe I’m alone among my generation, and perhaps the generation before me, in admitting my inability to change my email password without help. I’m 83. Bob confirmed I’m not alone. We talked, he advised, we talked some more and he agreed that he’d become “The Computer Guy” for readers of The Royal Examiner, providing an occasional advice column, the first of which follows this introduction.

Bob Way is a U.S. Marine Corps veteran and earned a BS in Information Systems. For a quarter century, he worked at Orbcomm, Motorola and Boeing supporting the Ground Network Systems for the large formation satellite constellations launched by Orbcomm and Iridium. (Are you still with me?). Bob retired two years ago and now is helping develop computer classes to teach at Samuels Public Library. More parenthetical  stuff here (as a US vet, Bob is invited to assist Robert MacDougall (USMC)  and me with next year’s Memorial Day ceremony May 29, 2017, at the Gazebo).

Bob says he needs stuff to do in retirement, hence our invitation for him to write a column or two for the Examiner!

He has lived in Linden for 25 years and, with wife Barbara, raised three sons there. He’s been a soccer coach, a Cub Scouts pack leader, and supported the Front Royal Women’s Resource Center as their IT guy for as long as his wife has been president.

She retires from the position December 31 while Bob dives into a new role as our computer guy.

Back to the Yahoo warning, is it genuine or a fake? “This is genuine,” said Bob.”I’ve seen fakes over the years and they are easy to figure out. A genuine email such as the Yahoo one will usually have the following characteristics:

*They will display a corporate logo.

*They will NOT ask that you click on any links or contain attachments.

*They do NOT request your personal information.

If an email you receive about security issues prompts you to click on any links, download an attachment, or ask you for information, the email was not sent by Yahoo and may be an attempt to steal your personal information. Avoid clicking on links or downloading attachments from such suspicious emails.

How should you respond to the current situation! First, change your password. To do this, go to the main Yahoo site and click on “sign in” on the upper right of the screen. Enter your Yahoo email and you may be presented with a screen that steps you through changing your password. It’s easy when you know what you’re doing! If you log in but still aren’t sure you actually changed your password, then do the following:

It is advisable to change your password every once in awhile, Bob said, so copy the above directions!

January 18 to 26 is International Snowmobile Safety Week, an occasion during which snowmobilers are reminded about the importance of responsible riding. Here are seven tips for staying safe on the trails this winter.

1. Gear up. Always wear a helmet and dress for the weather.

2. Be prepared. Bring along a safety kit that includes flares, basic tools, and first-aid items.

3. Check your ride. Before heading out, make sure your snowmobile is tuned up and has enough gas and oil.

4. Remain on the trail. Most accidents occur when riders stray from marked trails and run into hazards.

5. Ride with a buddy. Don’t head out on your own, and tell another person where you plan to go before you leave.

6. Avoid frozen lakes and rivers. Only ride on ice if it’s at least 10 inches thick.

7. Never drive impaired. Operating a snowmobile under the influence of alcohol or drugs is both dangerous and illegal.

Lastly, consider taking a snowmobile safety course, especially if you’re a beginner. This will help you stay safe on your snowmobile and learn the local rules and regulations.

9 safety tips for walking in winter 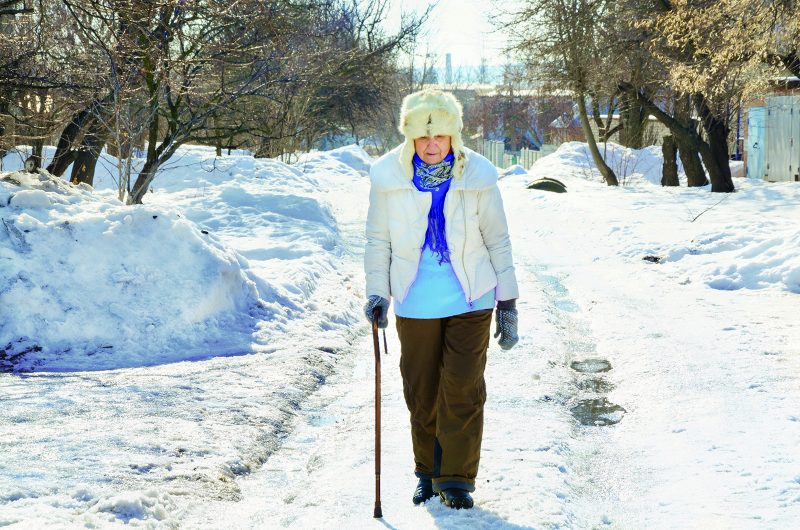 Freezing rain and hard-packed snow create icy conditions that make walking a hazard in winter. Before you venture outside this season, be sure to follow these nine safety tips to avoid falls and injuries.

1. Maintain a wide stance with your feet about a foot apart

2. Keep your knees slightly bent to lower your center of gravity

3. Walk slowly and take small steps, even if you’re in a hurry

4. Place your whole foot down at once, rather than leading with your toes or heel

6. If you wear ice cleats, remove them before walking on smooth, hard surfaces

7. Use a cane adjusted to your height, and attach a retractable ice pick to the end

8. Dress warmly to avoid shaking, which can make it harder to keep your balance

9. Wear padded underwear or hip protectors to reduce the risk of injury if you fall

While these precautions can help keep you safe, be sure to take advantage of delivery services offered by grocery stores and pharmacies to limit your need to go out in bad weather.

Everything you need to throw an outdoor winter party

If you’re tired of being cooped up inside this winter, consider hosting an outdoor party. Here are a few things you’ll need to make the event a success.

Decorations
To create an inviting atmosphere, string paper lanterns or fairy lights from trees and line walkways with tealights in Mason jars. Vibrant streamers and balloons will contrast beautifully with a snow-covered yard, or you can opt for natural decors like pine cones and evergreen branches.


Even if the weather is mild during the day, you’ll want to make sure your guests can remain warm once the sun begins to set. Patio heaters are the perfect solution, and they come in a variety of sizes and styles. Alternatively, you can gather around a backyard fire pit. You should also ask every-one to dress warmly and encourage them to bring their own blankets.

Activities
If you want to keep your guests entertained, plan an assortment of activities. For example, you could:

• Gather around a campfire for a sing-along

• Set up a dance floor and play lively music

• Rent a projector for an outdoor movie screening

Finally, make sure you have plenty of hot beverages to offer your guests including coffee, tea, and hot chocolate.

If you’ve been diagnosed with a serious illness or disability, money may be the last thing on your mind. However, as soon as you’re able to, you should give some thought to your finances. If you can no longer work as a result of your condition, you’ll probably need to take some steps to ensure your financial situation is stable.

If you’re going to have trouble making your mortgage payments, you should also contact your mortgage company. Some lenders offer foreclosure prevention programs to help homeowners who are dealing with a crisis.

Make a budget and manage your money carefully
Determine how much money you require each month by making a list of living expenses including groceries, rent/mortgage, utilities, insurance, car payments, and other recurring fees. Compare this with what you have coming in from various revenue sources. You may need to cut back on certain frills or unnecessary expenses to make ends meet.

To manage your finances more effectively when facing an illness, consider enlisting the help of a financial adviser, debt counselor, or other industry professional.

If you have a teenager, they likely spend time on social networking sites like Facebook, Flickr, Instagram, Snapchat, TikTok, Twitter, and YouTube. But do they know the risks? While social media networks help kids keep in touch with friends, it can also expose them to people who intend to hurt them.

From cyberbullying to sextortion and data breaches to inappropriate content, there’s a lot to be wary of on the internet. That’s why it’s important to talk to your teen about how to use social media safely and responsibly. Here are a few ground rules you should establish:

• Don’t send intimate pictures of yourself to anyone, even if you trust the person

Remind your teen that once words and photos are shared online, they may be impossible to delete and easily misused. Even if a post doesn’t seem like a problem now, many employers use social media to screen candidates. Explain to your teen that they could miss out on their future dream job because of an inappropriate comment or video they post today.

Finally, here’s a tip to help reinforce the notion with your teen that anyone can see what they post online. Before they send or share anything on social media, encourage your teen to ask themself this question: “Would I feel comfortable if my teacher or grandmother saw this?”

The website StompOutBullying.org provides resources for how to recognize, prevent, and deal with cyberbullying and other forms of digital abuse.

Does your dog need winter clothes?

All dogs need to spend plenty of time outdoors in order to get enough exercise, enjoy the fresh air, stimulate their senses, and do their business. However, when the temperature drops, you may wonder if it’s safe for your pup to be out in the frigid air.

It’s important to note that, like humans, dogs can suffer from hypothermia. In fact, their ears, nose, tail, and foot pads are susceptible to frostbite. Therefore, it’s advisable to keep your pup’s outings brief if the temperature drops well below freezing.

When you do take your dog for a walk in the winter, you must make sure your canine companion is prepared for the weather. There are several factors that influence whether your dog should wear a winter coat and boots. You should consider:

• The temperature (is the cold tolerable or piercing?)

• The duration of the walk (will you be out for five minutes or an hour?)

• The planned activity (are you going for a hike or stroll around the block?)

• Your dog’s health (sick, injured, or recovering pets should stay inside to keep warm)

If your dog needs to be bundled up for winter walks, visit a local pet shop to find boots and a quality coat that will keep them warm all season.