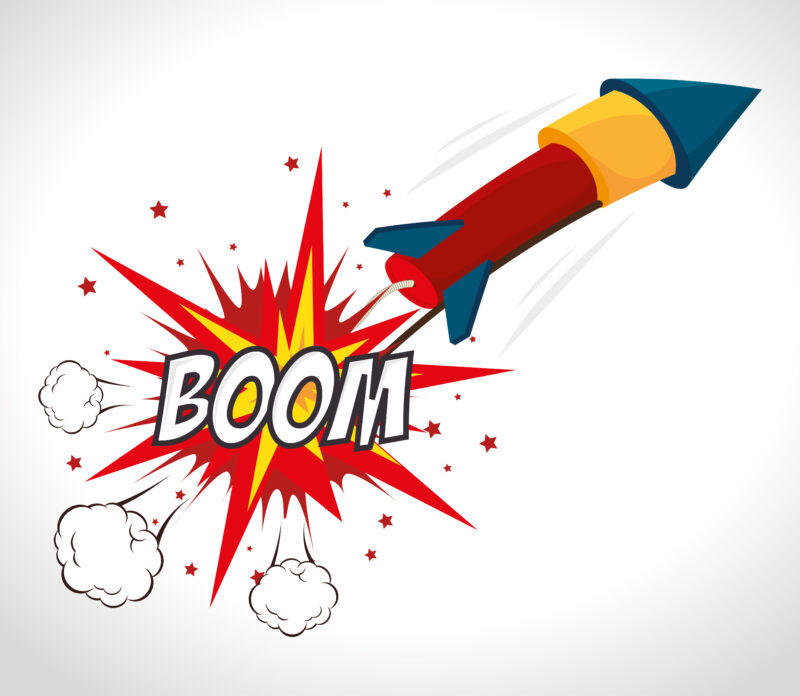 Shell-and-mortar fireworks cause the highest number of injuries, and the most serious, to those who should know better: Adults.

Although banned in many states, they are nonetheless widely available.

Shell-and-mortar devices usually make the most dramatic displays of large blooms with or without starry effects.

This type of explosive has a mortar (usually a steel barrel) that contains a charge to launch a shell. Users are supposed to stick the mortar in the ground pointed up and away, insert a shell, light the fuse, and run.

Between each of those steps there can be trouble.

The most notorious recent case was of a Montana man, who foolishly held the mortar over his head and lit the fuse. According to The Seattle Times, the mortar failed and the shell never left the tube. However, it did explode. He lost four fingers. He had a toe removed to replace one of his thumbs.

Not all injuries happen because of foolish acts. Simply checking to see why an explosive didn’t fire can be deadly. Always stay away from duds and spray thoroughly with water. Mortars can misfire and send a shell in unexpected directions.

Homemade shell-and-mortars cause many injuries and deaths. PVC pipe, when used as a mortar, can shatter sending pieces more than 15 feet. Inadequate metal tubing can shatter and send shrapnel many feet.

Hand injuries are the most common, followed by face and brain injuries. According to Newser, more than a third of those who suffered a serious hand injury from a firework had at least a partial amputation. At least 70 percent of shell-and-mortar eye injuries result in at least some loss of vision.

All hands on (a nicely stained) deck

Forget geometric forms and strong lines – 2020 is all about bringing the shapes found in nature into your home. Curves and arcs revitalize interior spaces and rounded shapes lend energy and inspiration. Here’s how to in¬corporate this trend into your home.

Furniture
Be on the lookout for C-shaped sofas, round dining tables, and chairs with curved backs and arms. In the bedroom, consider updating your bed frame for one that features a circular headboard or placing an oval bench under your window.


If you’re not in the market for new furniture this year, turn to your accessories. Arrange bowls or round vases in pleasing clusters, or install globe-shaped light fixtures. You can also adorn your sofa with round cushions and dot- or wave-printed throws.

This year’s hottest home decorating trend is easy to try. Best of all, it can work in practically any room, regardless of space’s style and features.

3 benefits of opting for a custom-designed pool

Are you thinking about installing an in-ground pool? If so, here are three benefits of opting for a custom-designed model rather one that’s a standard size and shape.

1. A durable product
Custom-designed pools are particularly durable and water-tight. This is because they’re usually built from a single piece of concrete or similar material. These types of pools are constructed in a way that minimizes the risk of cracks and leaks.


When it comes to the appearance of your new pool, you’re only limited by the size of your property. You can select the dimensions and shapes that work best for your lifestyle and backyard.

3. An eco-friendly option
A custom-designed pool can be environmentally friendly, provided you choose the appropriate building materials, sanitation method, and power source. For example, you can choose a structure made of clay or gravel, a natural filtration system, and a solar-powered water heater.

Additionally, if you opt to install a custom-designed pool, you get a feature that blends seamlessly with the rest of your landscape. Indeed, this type of pool will be uniquely suited to your property.

How to update French doors

French doors are a great way to separate two interior spaces that are visually connected. They’re also ideal for enhancing your view of the outdoors and letting natural light shine into a room. However, they can sometimes look dated. Here are a few ways to give them an upgrade.

Change the look
French doors are typically made of wood. If you’re not a fan of yours, why not paint them? White is a timeless choice, but you can also turn your doors into a focal point by painting them a color that contrasts with the rest of the room. Alternatively, replace the whole setup with doors that each feature one large pane of glass or have a modern steel frame.


While most French doors consist of two doors that swing outwards or inwards, there are different options available. Three- or four-panel French doors, which include two working doors flanked by large windows, are perfect for letting in more light.

Finally, if you love the look of French doors but lack the space for them to swing open, consider sliding or folding options.

Upgrading your yard can be a major undertaking, and it’s easy to miss a key detail if you’re not careful. Here are five things to consider before you begin.

1. Access
If your upgrade involves moving large objects into your yard, there needs to be a safe access route. Fences, walls, and trees can make it difficult or impossible for trucks to deliver supplies. Create a plan before the work starts to avoid delays.


If you want to install a pool or build a large deck, make sure there’s enough room in your yard for both the structure and the installation crew. Also, verify where property lines are located before placing fences, hedges, and trees.

3. Regulations
If your project involves a significant structural change, you may need to obtain a permit from the city. Your landscaping might also have to meet certain requirements such as respecting the maximum height for fences and hedges. Contact your municipality before starting any work.

4. Soil
The consistency of the soil on your property can directly impact the stability of new installations. Heavy rainfall and rapid freeze-thaw cycles can make the ground unstable. Hire a professional to inspect the yard before you begin construction.

Landscaping projects can revitalize your yard but for best results, they should be planned in advance.

Lawn care: 3 reasons to leave it to the pros

Are you tired of spending your weekends taking care of your lawn? If so, hiring a professional may be the solution. Here are three great reasons to use a landscaping service.

1. You won’t need any equipment
If you hire a contractor to take care of your lawn and garden, you won’t need to maintain a lawnmower, sharpen hedge trimmers or shop for fertilizer. In fact, you won’t need lawn care tools at all. This will save you the hassle and expense of buying, storing, and maintaining them.


Did you know that many people spend the equivalent of a week each summer taking care of their lawn and garden? If you hire a professional, your landscaping contract can include everything from mowing the grass and pruning the hedges to watering and weeding your garden. With fewer chores, you can spend your time doing the things you enjoy.

3. You’ll avoid unpleasant surprises
If there’s a problem with your lawn, plants, or trees, your landscaping contractor will know exactly what to do. A professional can identify and resolve issues involving pests, watering, fertilization, and more. This will save you the time and effort of trying to figure it out on your own.

This summer, trust your lawn care to a professional. Your yard will be beautiful and well-maintained, thereby increasing the value of your home and enhancing your enjoyment of the property.

What type of fruit should you grow?

Fruit-bearing trees, shrubs, and plants are easy to grow and can add visual interest to your yard with their vibrant foliage and flowers. Here’s what to plant based on various preferences.

If you want a harvest this summer
To enjoy your fruit within a few months, opt for fast-growing plants. A few examples include strawberries, raspberries, ground cherries, cantaloupes, and watermelons.

If you want long-lasting producers


If you’re willing to be patient, plant a perennial tree or shrub that has a long life but only bears fruit after a few years. Apricot trees and blackberry bushes take about two years to produce fruit. For blueberries, pears, and apples, you’ll need to wait three years. Plum trees take six years.

If you want unique but delicious berries
If you want to plant fruit that’s a little out of the ordinary, try black currants, Arctic kiwis, or Saskatoon berries. These berries are great for making mouth-watering jams.

Keep in mind that some trees and shrubs only bear fruit if there’s a second plant nearby to pollinate it. If you want to grow apples, for example, you’ll need to plant two trees.