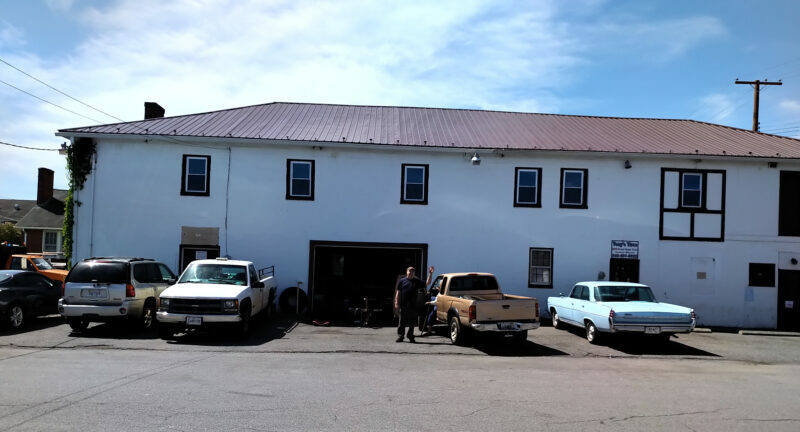 They offer all major tire brands, including Michelin, Pirelli, Goodyear, Continental, Falken, Hankook, Yokohoma and many more. Their distributors enable them to get virtually any tire needed within just 24 hours. They also offer a selection of wheels from various manufacturers including Advanti, Konig, Modular Society, Mickey Thompson and more.

Related Topics:automotiveTony's Tires
Up Next

A history of roads in Virginia: “The Most Convenient Wayes”

Cell phones and texting at the wheel = accidents

Texting while driving at 55 mph is somewhat equivalent to crossing the length of a football field with your eyes closed. How can that be? Well, drivers who are glancing at a cell phone or who are texting are taking their eyes off the road for 4-6 seconds, the time it takes to travel 110 yards. That is what a 2009 study carried out by researchers at an American university revealed.

No wonder, then, that drivers who use their cell phones while at the wheel have a 38 percent higher risk of being involved in an accident than drivers who don’t allow themselves to take calls or read text messages. Being distracted by a smart phone affects a driver’s performance, including the ability to perform basic tasks such as driving in a straight line. It also reduces a driver’s field of vision and ability to avoid obstacles. That is exactly why calls and text messages—which are seldom urgent—cause numerous accidents every year, sending lots of customers to auto body repair shops or patients to hospitals.

Handling a cell phone while driving can also result in costly traffic violations. Indeed, a moment of inattention while talking on a cell phone frequently results in running a red light or not respecting a right of way, which in turn increases the risk of collision.

Prevent accidents by switching off your phone while driving, or by asking one of your passengers to answer for you. If you must use your phone, adopt the safe practice of stopping in a parking lot or service area to take the call.

If your cell phone rings while driving, be sure to stop in a safe location before you answer it.

A history of roads in Virginia: New ways of doing transportation business

The “Dashboard” is an online system for VDOT managers to see in an instant which projects are on time and on budget. Pictured is “Dashboard II”, an expanded version of the original system.

As the new century continued to unfold, national trends in the public sphere were readily apparent in Virginia. Citizens were seeking more involvement in transportation issues as well as a role in planning future initiatives. They also were demanding more accountability from government and more transparency with the public’s business. Further, they thought government should do more with fewer resources.

Consequently, VDOT took some bold steps. One was an accountability system developed by employees in 2003 called the “Dashboard.” The Web-based tool became an early warning system for construction project managers, showing them in an instant which projects were on track and which were falling behind or going over budget. Citizens were invited to view the Dashboard online and to communicate with managers about projects important to them. In 2005, “Dashboard II” was launched with additional information on highway operations, engineering, safety, finance and the environment.

Employees also designed a new system to estimate costs of future transportation projects. One of the first in the nation, the system addressed the department’s tendency to underestimate project costs by an average of 187 percent—a margin reduced to 30 percent the first year of the system’s use. In addition, the agency began running a cash flow analysis to ensure that money would be on hand for approved projects.

Project managers, with authority and accountability, were assigned to all projects, not just the larger ones. VDOT also increased its contingent of engineers with professional licensure from 182 to 270 between 2003 and 2005. Further, in a major cost-savings initiative, the number of employees was reduced by 1,400 between 2002 and 2004; as vacant positions went unfilled, employees picked up added duties and work was outsourced.

An introduction to adaptive cruise control

You’re probably familiar with the cruise control function featured in most cars, but are you acquainted with the ins and outs of adaptive cruise control? Here’s what you should know.

What’s adaptive cruise control?
Adaptive cruise control allows you to both maintain a fixed speed and sustain a set distance from the car ahead of you. Depending on the car model, a laser or radar calculates the distance and speed of the vehicle you’re following. This enables it to automatically adjust its pace if the car in front of you slows down or another driver cuts you off. Some systems will even slow you down to a full stop if necessary.

Your vehicle will accelerate to the programmed speed again when it’s safe to do so, like when the vehicle in front of you picks up speed or switches lanes. As is the case with traditional cruise control, you can manually accelerate and brake at any time.

A few precautions
There are several things to be mindful of if you’re using adaptive cruise control.

• The system’s range can vary from model to model, and some will only function at speeds above 16 miles per hour.
• The laser detection feature may not function properly in bad weather or when the car ahead of you is very dirty and doesn’t reflect light adequately.
• The system may not be able to detect a stopped vehicle.
• This tool doesn’t in any way exempt you from paying attention to the road. Notably, you need to engage the brake if the car in front of you suddenly stops.

Adaptive cruise control can be a useful feature, but you need to have a thorough understanding of how it works. Only use it once you’ve familiarized yourself with the relevant information in your owner’s manual.

A history of roads in Virginia: Unexpected setbacks come in the new century

The Madison Heights Bypass through Amherst and Campbell counties draws traffic away from the
crowded Route 29 corridor.

Even before taking office in 2002, Gov. Mark R. Warner expressed concern about financing and scheduling highway projects, as well as about cost overruns for new projects and inadequate budget projections to maintain the highway infrastructure. The construction program so dramatically enlarged just two years earlier by the previous administration and the General Assembly was being severely crimped by the downturn in the economy. Rosy revenue projections foreseen for transportation in late 2001 were realized as untenable in 2002. Project cost estimates did not adequately account for inflation and were significantly low. The available funding and the extensive improvements in the transportation system called for were recognized as incompatible.

The new governor called for a “realistic and achievable” Six-Year Program for transportation improvements and directed VDOT to produce it. Secretary of Transportation Whittington W. Clement, recently appointed by the governor, indicated a sharp reduction in the construction program was necessary, saying, “We can’t do it all, but whatever it is, we’re going to do it well.”

Gov. Warner also appointed a new commissioner of transportation, Philip A. Shucet, and within weeks he and VDOT staff prepared a Six-Year Program that reduced the previously approved program by nearly a third. At the same time, Virginia’s aging highway system required more maintenance, further reducing available funding for new construction. Virginia, which long held “pay as you go” as its transportation funding philosophy, had to use Federal Reimbursement Anticipation Notes (FRANs), or special-use bonds, to help cover some construction projects’ costs.


“No doubt, tough decisions are being made to deliver a transportation program that is truly credible and realistic,” Secretary Clement said.

It appeared to be the beginning of an era of retrenchment, but at the same time, 1,157 projects across the state remained in the $7.3 billion Six-Year Program. And, simultaneously, motorists across Virginia rated highly the service they received from roads and highways, even in areas where traffic congestion was problematic.

The transportation theme of the new century, however, had been changed from spending and building to one of a realistic, credible, and systematic improvement process.